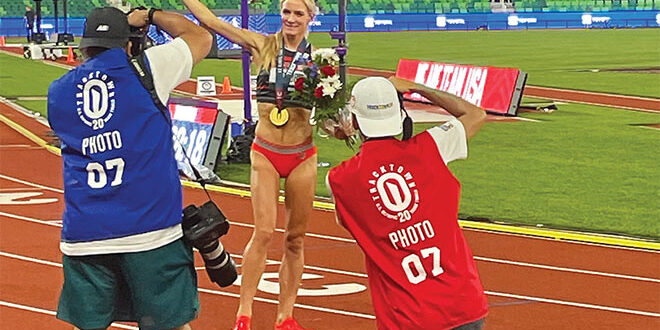 On to the Olympics, again!

While Crested Butte’s Emma Coburn was the odds on favorite to win another national title in the 3,000-meter steeplechase, anything can happen in the race. Nevertheless, Coburn remained calm, cool and collected throughout the race on Thursday, June 24 pulling away on the final two laps to take her ninth National title and officially punch her ticket to the Summer Olympic Games in Tokyo, Japan July 23-August 8.

It will be Coburn’s third straight trip to the Olympics. Her inaugural Olympic experience was at the London games in 2012 where she finished ninth. Four years later she returned to the fray competing in the summer games in Rio de Janeiro and won the bronze medal, the first American to win a medal in that event. Then, in 2019, she ran her fastest time to date of 9:02.58 to win gold at the IAAF World Championships in London.

Despite her long list of accomplishments in the steeplechase, she still had to race in the USTAF Olympic Trials June 18-27 at Hayward Field in Eugene, Oregon in order to make the U.S. Olympic team. Barring any major catastrophes, Coburn was a lock to qualify and remained focused on the task at hand, with a little training and strategy thrown in the mix.

“I’ve been feeling really strong and really fit and making the team is always the number-one goal,” says Coburn.

That said, with the COVID pandemic throwing the professional track season in flux, Coburn did have an alternate plan for the Olympic trials starting with the qualifier race on Sunday, June 20.

“Since the finals were three days later, I wanted to use the prelims to get a bigger workout and make it harder,” explains Coburn.

Coburn ran the fastest time of the qualifying round and headed into the finals on Thursday with her goal of making the team and her plan for the finals race all in mind.

Coburn settled into the back of the pack for the first several laps of the race and while that can create chaos and potential carnage, she never felt the chaos.

“I was willing to take that risk and just stay relaxed and hunt,” says Coburn. “I wasn’t feeling stressed or nervous.”

With the field running an easy pace, Coburn continued to bide her time before kicking into the next part of her race strategy.
“I used the final to run the first half of the race calm and the last few laps fast,” says Coburn.

She latched onto Courtney Frerichs when Frerichs made her move to build a gap on the field and then stepped on the gas to pass Frerichs and take off for the win posting a time of 9:09.41.

“I wanted my last two laps to be faster than they were but I was really happy with how smooth 9:09 felt,” says Coburn.
With her Olympic start sealed, Coburn did take some time in the ensuing days to continue training, mixed with a little R&R spending some time beating the Oregon heat on a floatie on a river.

But now it’s back to full-on focus as Coburn is in St. Moritz, Switzerland training for an upcoming Diamond League professional meet in Monaco on July 9 and then for the Olympic Games in Tokyo.

“Every year the competition changes so the goal shifts but I definitely want to win a medal,” says Coburn. “I have a lot of experience, I’m in the best shape ever and I feel really ready. Anything can happen.”