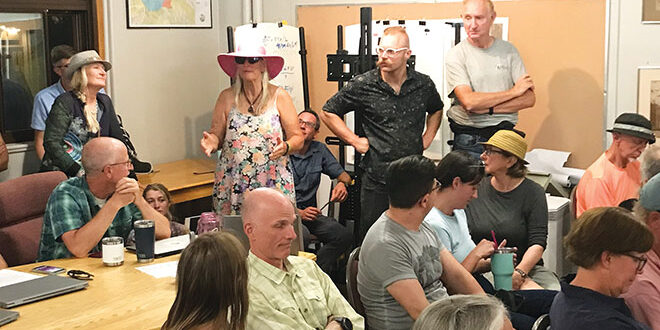 After several hours of sometimes emotional public discussion Monday night, the Crested Butte town council agreed to move forward with two initiatives to address what is being termed community preservation efforts. The first was approval of a 12-month moratorium on accepting and processing applications and issuing licenses for non-primary residence short-term rentals (STRs). Council also agreed to put a placeholder on the November ballot to potentially allow Crested Butte citizens to enact a tax on houses not occupied by full-time residents and/or increase the sales tax in Crested Butte to fund community preservation efforts. A special meeting will be held in August to flesh out details of the potential tax proposals (See page 16).

While admitting there is “no silver bullet” to solve the housing crisis, town staff advocated that a moratorium on STRs was needed to gather information on how the STRs impact the community in general and its housing stock in particular. The idea is to observe a period of time when obtaining an STR license is impossible and see if that deters some real estate buyers or reduces prices in Crested Butte.

“This will give us time to evaluate the town’s STR policy,” said town planner Mel Yemma. “We need to consider every possible tool to look at the displacement of our residents. Many times, when a house locals are renting is sold, the upgrades lead to gentrification and that house probably won’t go back into the long-term rental market. This ordinance can shift how our existing housing stock is used within the community.”

Yemma said the moratorium won’t impact the primary STR licenses locals can get to rent their homes for less than 60 nights per year and those currently holding STR licenses also will not be impacted. There are currently the maximum of 212 non-primary residence STR licenses in use in Crested Butte.

Mayor Jim Schmidt again said a good compromise was reached in 2017 when a citizens committee and council came up with the 212 house cap in town.

“All over the world, STRs are having impacts that weren’t anticipated when short-term rentals were first implemented,” said councilperson Jasmine Whelan. “No study has been done on a community like ours, so we have this opportunity to determine the impacts of STRs on our community.”

Whelan, along with several others, expressed some alarm over the fact Airbnb sent an email to Crested Butte area hosts encouraging them to attend the Crested Butte council meeting and speak against the ordinance.

“We urgently need your involvement NOW,” the email stated as it instructed hosts how to provide public comment. “It is critical to speak up against the proposed moratorium on all new permits. Hosting is a vital economic recovery lifeline, and can be a key revenue source for many of our Hosts. It should not be restricted at a time when many residents are still struggling from the impacts of the ongoing pandemic…”

No one at the Monday meeting appeared to take the email’s advice.

In what ended up being approximately two hours of intense public comment with up to 122 participating on Zoom and another 75 in person at the council chambers, the overwhelming feeling was to flip off the $83 billion Airbnb company and enact the moratorium.

Public input
There was no shortage of people who wanted to weigh in on the subject, so Schmidt opened the floor and the cascade of comments flowed.

“It’s the opportunity to be the little mountain town that saw the problem and did something about it,” said Cass Rea. “It could set the example.”

Neil Watko of the Meridian Lake subdivision said that small community was starting to see STR impacts where people viewed it as a commodity rather than a community.

“The town is seeing lots of changes coming really fast,” said native Robbie Vandervoort who said he was building a home probably destined to be a short-term rental. “I am in support of this moratorium.”

Lauren O’Rourke said she started work at 7 a.m. Monday and still had more to do. She spoke about 8 o’clock and said, “Enough is enough. This is insane and has got to stop.”

James Steyaert spoke from Zoom and said he was in the process of building a house in town that he eventually planned to move to but would be short-term renting in the meantime to help pay the mortgage. “To change the rules on a whim is not fair,” he said. “This could financially ruin me and I’ll have to sell the house I’m working on. And it won’t go to a long-term renter.”

“We left Mt. Crested Butte for Meridian because the neighborhood became vacationland,” said Sandy MacNamara. “All short-term rentals should be taxed as a business and not a residence. Tax them, tax them. They’re making too much money at our expense.”
Brendan Riley has been coming to CB for 45 years and splits time between Crested Butte and Texas. He said people staying in STRs in Crested Butte are more likely to spend money at Crested Butte businesses. “When we bought our place, we paid more for our home because we could short-term it,” he said. “The really expensive multimillion dollar houses won’t be short-termed but we needed to. I got $29,000 in revenue last year and of that, $19,000 went to local workers.”

“Every restaurant is overwhelmed but we don’t have employees,” said Eric Rankin of Butte Bagels. “You can’t make money if you don’t have workers in town.”

“Wouldn’t it be amazing to be the first and say enough is enough?” asked Martha Keene. “People working in the service industry here are getting beaten down. It’s not sustainable and we aren’t creating a return experience. If we lose the STRs there will still be gardens to tend, roads to plow, meals to serve. It will be better balanced. I don’t want to live next to a business, I want a neighbor. Put a moratorium on STRs to catch our breath and develop a plan. Airbnb is like an infection and we need to get rid of it.”

Bill Smith said he and his wife moved out of town and have been renting their house to locals. “But I see our valuation going up, our taxes going up, our insurance going up. Can locals afford that?” he asked. “If not, what am I going to do? I don’t have the answer.”
“Maybe the council provides incentives to Bill to keep him renting to long-term locals,” said Cass Rea.

“I live in a longtime locals’ house but our landlord brought a realtor through today,” said Jess Ladwig. “That is worrisome. It is crazy how many houses have been built in town since I got here in 2007 but workers can’t find a place to live. Look out for the community. We need places for people to live, not just visit. A moratorium might make people think about not buying a house and that could allow locals to stay where they are.”

“I work for a hospitality company in town,” said Tom Barry. “I have everything to gain with short-term rentals but that email from Airbnb was alarming to me. I support the moratorium. It says it is something that it caught the eye of corporate Airbnb. It is appropriate to take a pause because the game is shifting rapidly.”

“I support the moratorium and eventual elimination of short-term rentals,” said Emily Artale (who lives in Buckhorn). “I live near an STR and it is destroying the livability of our neighborhood. We can be part of a really progressive solution. I too am deeply disturbed by the Airbnb email that was sent.”

“Short-term renting is a business and the council can regulate STRs through zoning,” said Eric Davis. “Residential neighborhoods should be residential.”

“We have too many STRs and too many people,” said Audrey Anderson. “We used to have shoulder seasons. Now people are here constantly. We have to go back to before ‘Whatever’ came here.”

“I don’t think the moratorium will make a difference,” said Susan Kerns. “What will, is building housing.”

“Another thing to keep in mind is that we’ve made it a year without losing someone to mental health issues,” said Martha Keene. “This decision affects people’s mental health.”

Council weighs in
“The staff has assured us that doing this research won’t slow down the building of housing,” said Whelan. “We will displace locals if we don’t do this moratorium. The Airbnb email is concerning. To have a $75 billion company try to put its thumb on the scale of our small town, Crested Butte debate is not right. They may be worried about the precedent. But we are a community that values people over profit.”

“I love this show of grassroots community,” said councilperson Mona Merrill. “I think the moratorium can lift morale and unite us. It is community driven and can give people hope.”

“I don’t want to go down the route of labeling people as “evil STR owners” because I know many that are really good people,” said councilperson Chris Haver. “I don’t know if this will lower the cost of houses and even if so, to the extent it could be bought by a working local? I still have lots of questions because I don’t know the long-term consequences.”

“I think the 212 allowance for STRs is too much for town,” said councilperson Jason MacMillan. “I would like to see the number reduced and the licenses more evenly distributed through town. I do think more STRs lead to displacement and a moratorium could keep some long-term rentals stay that way. A 12-month moratorium allows us to refocus.”

“I think it was deplorable what Airbnb did,” added Schmidt. “And the local realtors all signing the same form letter was lazy. Our community consists of more than the people that spoke tonight. I’ve heard from local homeowners who lived here a long time and were counting on the house to help their retirement.

“People have been very persuasive this evening,” said Schmidt who could read the room and made a quip about self-preservation. “If you think there are too many people here start a petition to get rid of the lodging tax that funds marketing. I’ll sign that one. I don’t know if this moratorium will keep everyone in their place but I’m going to go ahead and vote for the moratorium.”

He did, as well as the other five councilmembers that were present. Councilperson Mallika Magner was not at the meeting.