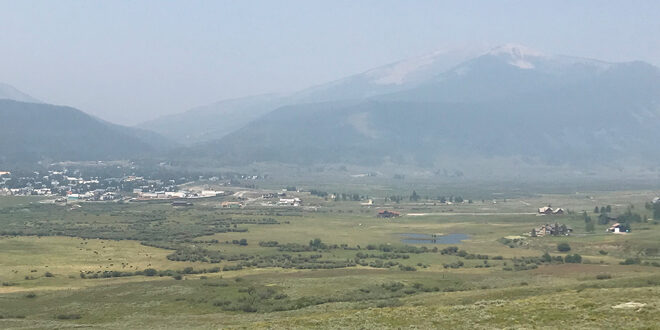 Anyone know where the smoke is coming from? Uh, everywhere between here and the Pacific Ocean. It is apparently part of the “new normal” as wildfires in the West pick up and become part of our “normal” summer weather. Add to that the continuing drought conditions and occasional “heat domes” that bring 100+-degree temperatures to Denver and 80+-degree temperatures to Crested Butte and we have a new sort of summer. As bad as we see it, this is still probably one of the better places to be…

Anyone know how the kids are going to get to school? Uh, in their parent’s car? Yup. There is such a shortage of school bus drivers in the Gunnison Watershed School District that at the moment there is no plan for school buses to serve the North Valley when school starts August 23. So, the traffic cluster that we all expect on school days from 8:15 to 8:45 is about to get more clustery. The CBCS has kids coming in from CB South, Mt. Crested Butte, Meridian, Buckhorn and everywhere in between. If there is no bus picking them up, Josephine’s ‘Mad Mother 500’ will be bigger and madder five days a week.

Anyone know how the messaging over CB’s flammable ‘empty house tax’ or Orwellian ‘community preservation fee’ or now bland ‘non-primary residence tax’ could be worse? No. But that is part of making legislative sausage I guess. Singling out second homeowners seemed part of the purposeful tweak for some. A second homeowner who spoke in favor of a “reasonable fee” on second homes said after getting crap from others in the CB second homeowner club, most understood the concept when he framed it as a homestead exemption for locals – that many people living in places like Texas, Oklahoma and Arkansas gladly take. If the council applied the tax to everyone and then exempted those that lived in their homes full time or rented a portion of it to workers for more than six months, the natural divisiveness of an ‘empty house tax’ might be readily accepted. Despite the cry of unfair “tyranny” by some in the GV2H crowd, it isn’t, but how the tax is implemented and messaged matters. That’s part of the problem of quickly putting something together at the deadline. But the sometimes brutal work of making political sausage appears to be coming to a reasonable conclusion. Gone is a $10,000 annual tax (to a more palatable $2,500) and a link to a broad sales tax we all get to participate in is being pushed by council. We’ll see more details Monday.

Anyone know how to discourage public participation in the public process? Mt. CB’s town government does — don’t take the time, effort and money needed to set up public meetings so they are available on Zoom…even when they’ve already done it. As a case in point, during a June 15 meeting on short-term rentals, Mt. CB attracted more than 100 people to participate via the online technology. That’s democracy in action.

Most of our local governments have continued that online access learned in the pandemic with great success. I have recently zoomed into the county commissioner meeting, the school board meeting and seen more than a hundred people pop in at Crested Butte council meetings. The city of Gunnison is meeting in person but also continuing the Zoom element. But for some reason the town of Mt. CB is slow walking that public engagement tool citing money and personnel. The money thing is ridiculous since they are pulling in way more cash than anticipated this year. They have plenty of money to buy the needed equipment that really doesn’t cost that much to upgrade. The personnel argument of needing to hire an IT person is funny as well when most people 80 years old or younger have learned how to effectively Zoom.

Government transparency is important to me and this is an easy way to be more transparent. The slow walk sticks in my craw. Granted, Zoom is a new addition to the workflow but it isn’t hard. If every other local government has figured it out, I don’t understand why Mt. CB can’t. To actively deprioritize public participation in public government as well as make it hard for the public officials who might not be in town but want to take part in the meeting when the tool is there, is misguided.

Anyone know who will bus tables when the kids go back to school? Holy crap – no! Cancel school! The already stretched restaurant workforce in Crested Butte is about to lose a significant part of the employee pool. Local high school and college kids stepped up to the plate big time this summer to help local eateries. They made good money and learned valuable life lessons but the ones I’ve talked to are tired and ready to go back to their regular life of classes, sports, homework and young adulthood. They are appreciative of the bank account but exhausted. As they leave so will the tsunami of summer tourists but as we all know, the late summer and fall have become pretty busy, especially on weekends as people have discovered our piece of paradise. So I wouldn’t expect that you’ll get that entrée much faster on a September Saturday than you did in July.

Anyone know where your 25-year-old waiter lives? In his Subaru? The housing crunch is real and anyone renting a place in the North Valley is rightfully concerned about whether they’ll have a place to live next month. There are possible large-scale solutions on the drawing board — The Whetstone parcel south of CB, Sixth and Butte by the Gasser, the North Village in Mt. CB — but they are all at least a year or two away. The local governments could implement something immediately like requiring any new house being built to include an ADU (accessory dwelling unit) that is offered for long-term rentals. There are, I’m sure, ways around that but that is a real action that could bring new units on the market quickly. Or we can keep wringing our hands and talking about 2023.

Anyone know if Kebler is open? Asking for a friend…