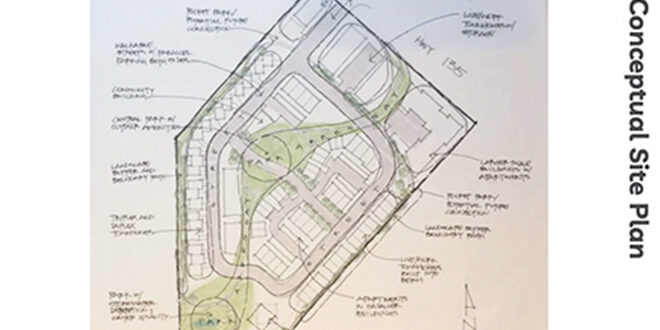 A significant affordable housing development of mixed architectural styles using gardens, parks, pocket parks, a central green belt and community meeting places could well be standing at the county-owned Whetstone parcel across from Brush Creek and adjacent to Riverland Industrial Park within just a few years. The county has moved from an initial series of site walk-throughs and community input meetings into a planning and design stage for the parcel. The next step is an implementation strategy, with a goal to submit a sketch plan to the county by the end of the year and ideally begin construction in 2023.

Following a design charrette in late August involving more than 30 people, county officials and project specialists unveiled a vision that is coming together for the project during a work session update with county commissioners on Tuesday, September 14. It seems that during the charrette, facilitated by the county’s consultant team, three groups of architects, landscape architects, neighbors, nearby business owners and other community members came up with three very similar visions.

Gunnison County sustainability coordinator John Cattles shared a summary vision for 180 to 220 homes “for a diverse mix of local individuals and families to live and work,” and serving a range of incomes “possibly up to 200 percent of AMI (Area Median Income).”
Gunnison County Community Economic and Development director Cathie Pagano also shared what the vision is not: A transportation hub with intercept parking; a school expansion area; a camping area; ball fields or a large public space; or single family detached affordable housing. Pagano said time was given to consider those possibilities, but ultimately, the group did not think the parcel was an appropriate location for those uses.

“We do want to accommodate green spaces, garden spaces and community spaces,” she said.

Project consultant Willa Williford agreed that on the first day of the design charrette there was a lot of discussion on camping and detached housing, but by the second day participants could see that those would be challenges.

Danica Powell from Trestle Strategy Group, another project consultant, said the design charrette included some diversity, equity and inclusion specialists as well. After an initial site visit, the charrette participants broke into three groups and began drawing. The similar ideas included more density closer to Hwy 135, and less density to the west approaching the Slate River and Whetstone Mountain; scenic views from all angles; a grid of connecting streets through the community; and a greenway through the center of it with a playground.

Themes around the building design included some relationship to Riverland’s industrial characteristics, with more industrial style (flat roofs) to the east and mountain-style homes incorporated to the west side.

County commissioner Liz Smith brought up how much people care about preserving place and character at the north end of the valley, and Cattles said the site actually lends itself well to offering views and preserving view sheds.

County commissioner chairperson Jonathan Houck said he believes there is a great need for rentals, and people who do not wish for ownership. “Once you create a little more capacity for those lower end rentals,” he predicted the market might also course correct somewhat for other rentals in the valley. “Lots of people in this community rent,” he said, “regardless of income range.” Houck said the project needed to represent that.

Smith said there is also need for people to be able to advance, using a rental or an ownership opportunity as a stepping-stone to a higher value home at a different point in time.

Both Smith and Houck discussed the importance of secure housing in which residents can trust that they won’t be displaced by a sale or use change. All agreed that within the deed restriction agreement, the language will make certain that this housing will be for people who do earn their income locally.

“At a very basic level, we haven’t built enough housing to keep up with the population growth,” said Cattles.

Other key takeaways for the sketch plan include ample snow storage; renewable energy and sustainability; concern for height, parking and density; sense of privacy and opportunity for connection; pet friendliness; pocket parks, hopes for a corner store, park, playground, and functional storage spaces.

“I think what you’ve heard from us is a general sense of comfort with the criteria, the mission and scope,” concluded Houck. He said he expected the financial feasibility coming soon to help balance all the visions.

Immediate next steps are an engagement with school age kids on October 20 (Crested Butte Second Graders and an after school activity in Gunnison) and outreach to valley employers, including Riverland businesses, Western Colorado University and Crested Butte Mountain Resort. Then a financial feasibility outreach will take place, speed-dating style, with 10-12 interested developers.
Additionally, community walkabouts on the site are tentatively scheduled for September 30 and October 5. A website will also be live in the coming weeks.