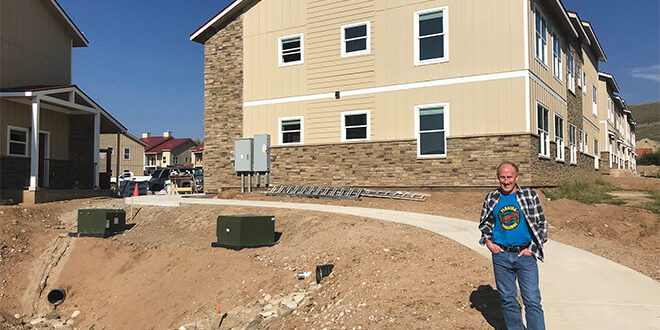 Walking around what just more than a year ago was a vacant lot filled with scrub, the dream of a dynamic neighborhood filled with local workers now appears close to becoming reality.

The latest affordable housing project in the valley is on the cusp of accepting its first residents later this month. Phase one of the Paintbrush development located in Gunnison near the Gunnison Rec Center is just about completed with the hope that final inspections will be done next week and then people can start moving into the first 13 units by the end of September.

In what most would admit has been a remarkably fast construction schedule, Paintbrush will go from coming out of the ground on July 20 of 2020 to filling 77 units by Thanksgiving of 2021. The 14 buildings look good with stone and wood exteriors and light, airy apartments with solid appliances and fixtures.

Owned and financed by Houston’s Gary Gates and Gatesco Inc., the project is in some ways meant to make a statement and prove a point. Gates, who has had a house in the North Valley for years, was met with sometimes heavy resistance to his Corner at Brush Creek affordable housing proposal located south of Crested Butte. That project ended in a stalemate after many public meetings and hundreds of hours of public comment.

“We wanted to knock this out of the park and exceed expectations,” Gates explained while touring the project last week. “I wanted to prove we could do a quality project and do it fast. I don’t want to do just one of these projects, I want to build off this. And I guarantee you that no one will be able to do it for less money than me. I don’t want to make any money on this today, I just don’t want to lose money. I don’t need a construction or project fee. I want to be part of the solution to the housing problem. I’ve always wanted to do something like this to help solve a problem.”

Gates made it clear he would focus on the housing element of the developments but expected the local governments to deal with the ramifications of the growth such as transit or school expansions.

Paintbrush a blip in the portfolio
Gates said he is getting close to owning more than 9,000 rental units in the Houston area. The Gunnison Valley projects would be less than 1 percent of his real estate holdings. But his business allows him to do things like buy construction materials in bulk at significant discounts. He can utilize the knowledge and time of his Gatesco employees to help keep costs down. He said while no one would believe it, his construction costs are coming in at close to half of the perceived market rate.

“Other than some leeway on the land, I don’t want any government money for these things,” he insisted. “I don’t have any partners so I can be quick and not worry about some things that other people do since it’s all my money. For example, I didn’t ask for a break on the (water and sewer) tap fees with the city on this project and that helped speed it up. Now I have the basic architectural plans and can use them for future projects. We can adjust some things so they fit better in a particular neighborhood, but we have the basic design. We learned some things, but the foundation is set.”

Gates said he still owns the first property he purchased in 1986 and he never intends to sell it. The same holds true for his Gunnison County projects. “I build for the long haul so it’s not cheap rental construction,” he emphasized. “I want this working 30 years from now.”

Gates said his contacts through his Houston properties came in handy at times. He said he could get a big discount on supplies, for example, by purchasing them up front with longtime partners. “I had the ability to keeps costs down,” he said.

Speed and efficiency
Onsite project manager Arie Bogaard said while it has been just 15 months to see 77 units close to completion, the goal is to be even faster in the future. “Like everyone, we had to deal with manpower shortages at times that pushed us back,” he explained. “We had some supply issues, but Gary was able to pivot and, if for example something like the trusses weren’t available up here for months, we found them somewhere else in the country and made sure they got here. Material costs went up pretty high like they did everywhere, but Gary didn’t let that get in the way either. Overall, we had to be creative at times, but it has really come together. There have been lots of moving parts the last few months, but it has gone very well despite that.”

According to Bogaard, the biggest delays were with cement and asphalt but those eventually came through as well.
General contractor A.J. Cattles said the project has gone up quickly for a mountain construction project and an emphasis on using local contractors and workers was part of the reason. He estimated more than 70 percent of the workers on Paintbrush have been local.
Gates said more than 350 people have expressed interest in preliminary applications to rent one of the units. Bogaard added that some of those could be from the same family but it is far more than was expected for a 77-unit project. Any one organization, such as Gunnison Valley Health, Vail Resorts or Gunnison County are allowed to claim up to 10 units each under so-called master leases for their employees.

Gates explained that there are 77 units in the development with 69 of them under a deed-restriction requiring, among other things, employment in the county. There are eight free market units but Gates and Bogaard said even the free market rents would be similar to the others given current market conditions.

“To meet regulations, we are in what is considered a pre-application phase,” explained Bogaard. “That started in January and people have been coming in to get on that list since January. People will walk by and ask to get one of the units. We will move to formal applications soon and then make the selections. Most of the units are deed restricted so people have to meet certain work hour and income requirements. Everything from the efficiencies to the single family homes is rentals with a minimum of three-month leases.”

Wide range of incomes
Given the income parameters, Bogaard said most of the renters will make between 80 and 200 percent of Area Median Income (AMI). The units will be pet friendly and monthly rent includes all utilities except for Internet and cable. The smallest unit is a 375-square-foot efficiency while the largest is a 1,745 square foot single family home that includes the garage.

“Given the number of people in the pre-qualification stage we don’t see it being hard to fill,” admitted Bogaard. “We just have to be cautious that all the appropriate deed restrictions are met.”

Walking the property, Bogaard pointed out a big irrigation pipe that was installed and buried and he promised that nearby neighbors would continue to have access through the property. He also wanted the neighbors to feel like their properties wouldn’t feel squeezed as a result of the new development. Landscaping will likely be put in next summer.

“We learned some things with Paintbrush,” concluded Gates. “We can probably cut a few more costs and build faster. But I am pleased. I believe we have knocked this one out of the park and exceeded every expectation. I understand the county took some risk going with me on the project. I wanted to exceed their expectations.”

As for the future…
“I want to do more. But I won’t lose money on these projects,” Gates promised as he eyes a future with a potential Western Colorado University housing project adjacent to Paintbrush, a small housing development near the county fairgrounds, and the county’s 14-acre Whetstone parcel opportunity that is in the early stages of planning across the highway from the Corner at Brush Creek. “We can make a real difference in the housing problem.”