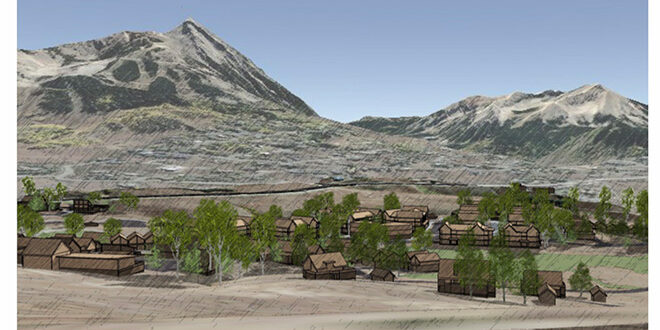 The Mt. Crested Butte planning commission held a public hearing on Wednesday, September 8 to review the North Village planned unit development (PUD) application and brought up issues to tighten up the plan.

Throughout the past year and a half, the North Village team has engaged with the town, stakeholders, interested partners and the greater community to determine a PUD design for the north end of Mt. Crested Butte that will reflect the goals and vision of the community.

The North Village Associates team attended the meeting to present the PUD application and shared their enthusiasm for the project.
“We’re excited about it and we’re excited to keep engaging the town and the community in general to do something that’s good for everyone,” said North Village owner Claudio Alvarez.

“I see the North Village property as this great opportunity that I feel passionate about and have great interest in and feel that it’s not just an opportunity for the mountain and Mt. Crested Butte, but the whole valley,” said architect Jennifer Barvitsky. “And I feel if done well, it’s a homerun for the mountain and it’s a homerun for our valley.

The 150-acre North Village property is located at the base of Snodgrass Mountain and the current “flexible” plan would accomodate approximately 1,700 units, down from the original 3,500 units in the first 1985 approved PUD.

Lead planner Heather Henry walked through the plan that’s intended to be flexible in which the community can establish its desired needs and wants as they are determined, all while fostering a deep connection to the landscape. She reiterated several times that they are looking for a flexible zoning approach, as stated in the application: “To ensure the broadest opportunity possible for publicly driven projects to establish themselves within the PUD, the village seeks to utilize a flexible approach to zoning on the developable areas within the projects.”

The layout includes the neighborhood entrance, which will include a visitor’s center and a transit center, with the main road leading to a Rocky Mountain Biological Laboratory (RMBL) campus, then wrapping up to a commercial core that could be used for civic uses, retail, restaurants, offices or hotels. Recreational trails and trailhead connectivity are also critical elements throughout the entire property.

A traffic study was conducted over the Fourth of July this year, and the team predicts the full build-out of the project could generate approximately 8,548 daily trips, so the plan suggests constructing one westbound left turn lane and one southbound left turn lane. Henry noted they while the North Village still only contains one main road and one entrance in and out, they worked with the fire protection district on the entire road network and egress of the neighborhood pockets.

Phase 1 of the plan would include construction of primary utility infrastructure, establish the main entry roadway and service to development sites, which would include the visitor’s center, bus shelter, horse outfitter operations, residential areas and RMBL’s campus. Trailhead connectivity and recreational infrastructure would also be established.

Phase 2 would continue the main road to development in the village center area and Phase 3 would continue development of the additional higher density residential and commercial areas, and single-family residences along the hillside.

The team said a key component to the plan is to maintain critical viewsheds in the area by keeping development below the ridge lines, clustering developing in distinct pods to allow open space in-between and increasing the density toward the core.

RMBL executive director Ian Billick spoke on the project’s significance to RMBL’s year-round research and educational operations. “We see this as an opportunity to absorb some of the impacts of tourism, and enhance the visitor experience not just for visitors but also for the community. Workforce housing is very important to not only our organization but also for the community in general. If we do this right with your feedback, in 20, 50 years we’ll be looking at this and we’ll be very happy with something that matters.”

Henry noted the rarity of such a vision-driven project. “This is serious, it’s a big project. It’s so important to this community to get it right. We’re all leaning into this.”

During the public hearing, several folks noted they liked the plan but had concerns related to density, traffic and water.

“There’s a lot to like about this… I like the general layout. This is a good proposal,” said Jim Sharpe. “I envisioned something much, much smaller…it’s still a lot of units for a town with only 800 residents.”

Kathy Hooge said she was not against the proposal, but had several concerns, including water, traffic, snow storage and short-term rentals. She asked that they have the HOAs not allow short-term rentals. “Otherwise it will be open season, the REIT and LLC’s set up for investments will be able to come in and buy and the locals won’t have a chance. All you have to do is look at Pitchfork.”

Jim Starr with the Valley Housing Fund spoke on housing. “In short, we’re very excited about the possibility about creating community workforce housing in the North Village. We think it’s important that we do this in a phased manner so we don’t overbuild but we meet the needs of the community.”

RMBL science director Jenny Reithel said, “I’m so excited about the North Village project because it gives us a year-round campus. Having those facilities means that we can do more snow science, ecology and evolution and genetics, etc. This is information we need for our world right now.”

The planning commission’s initial feedback was that the overall plan was lacking in detail and it was difficult to understand what was being proposed.

“There are many aspects of the proposed PUD that I liked,” said Nancy Grindlay. “Certainly the RMBL campus, I’m really on board with that. And I liked the transit center. I like the idea of affordable housing. But I was very taken aback by the density of the proposed housing.”

Grindlay also expressed concern with the traffic study predictions. “8,548 trips in a day just blew my mind as a possibility. That’s going to fundamentally change our community. People come here to live for the quiet, the peacefulness, the lack of traffic. Putting in an additional 8,548 extra trips per day is something I can’t wrap my mind around unless we somehow change how we get in and out of Mt. Crested Butte.”

“This entire town has one road in one road out,” said Sara Morgan. “The improvements that were presented and the work with the fire department, I’m ok with that. We have a bigger problem at the entrance of town than the entrance of this development.”

Reed Meredith had previously pushed for the North Village having two access roads in and out. “I certainly do appreciate the work that’s been done to try and improve that,” he said. But reading the fire district’s letter noting that a loop type arrangement would also be acceptable, “I read them as saying what you’ve done is good, but it could be better,” said Meredith. “I would say good is not good enough when better is expected.”

Grindlay also wondered if the 17 affordable housing units were going to be available to the whole community or just RMBL folks. “We need housing for our teachers, our emergency workers, our policemen…I don’t think they’ll want to live in dormitories.”

As for water, “That’s an issue that we can’t avoid and I’m very concerned with the density that’s being proposed,” said Grindlay. “How in the long run are we going to be able to support that?”

“I think we’re all feeling that this is very conceptual and not very definitive,” said Meredith. “It’s hard to evaluate just yet. I’m looking forward to getting more detail and a more definitive plan.”

The planning commission will continue the public hearing to its next meeting on Wednesday, September 22 at the Mt. CB Town Hall and welcomes public attendance and input.