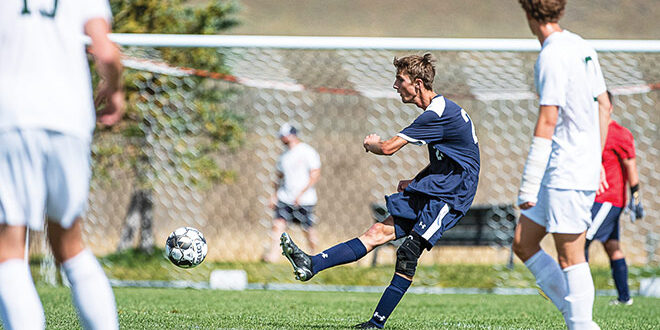 After spending the first three weeks of the 2021 season battling mostly non-league opponents, the Crested Butte Titans soccer team jumped into the mix of league play last weekend with games against the Colorado Rocky Mountain School (CRMS) and Ridgway on Friday and Saturday, September 10-11 and came away with a couple of wins.

Crested Butte opened the weekend on the road as they headed to Carbondale to face CRMS. Last year CRMS gave Crested Butte a tough match before the Titans eked out a 2-0 win, so the expectation was a tough match with their league opponent.

“I knew we would do well against CRMS but did not know how strong they would be,” says coach Bob Piccaro.

The game did not turn out as competitive as expected though as the Titans opened the scoring in the first minute and kept pouring it on. Jacob Bernholtz kicked things off in the second minute of the game dribbling past two defenders to score. Five minutes later, Bernholtz assisted Grayson White’s goal and then Blue Gardner and Jamis Matlock each scored in the next four minutes to build a 4-0 Titans’ lead.

White tacked on his second goal of the game in the 19th minute off an assist from Brendan Hartigan and Trent Pulliam cracked a low hard shot from 25 yards out to give the Titans a 6-0 lead heading into halftime.

After a somewhat flat start of the Titans, they returned to their scoring ways as Bernholtz netted his second of the game, White completed his hat trick off an assist from Ben Barney and Avi Narayana capped the scoring following on a shot from brother Darshan Narayana for the 9-0 Titans’ win.

“After the game started, it was evident they were early into their season, they will be better down the road,” says Piccaro.
The game was not without some bad news though as Crested Butte lost starting center midfielder Jamis Matlock to injury. They then lost him for the showdown the following day against the Ridgway Demons.

Crested Butte, Ridgway and Telluride are always in the mix every year for the league title and the Titans knew the Demons would bring a tough match when they came to Crested Butte on Saturday, September 11.

“We had huge concerns, Jamis is playing so well right now and those are big shoes to fill,” says Piccaro. “We were anxious as it would be our first true test in our league and we needed to get a good game under our belt against them.”

Ridgway took control of possession in the opening minutes of the game as the Titans struggled to switch gears from their game the previous day. But the Titans’ defense and the work of midfielders Davis McNeill and Hartigan helped to hold off the Demons until Crested Butte caught fire on offense.

The Titans opened the scoring in the fifth minute when attention to the flanks gave Nathan Sawyer the ball open on the weak side. Sawyer sent a cross over the top to the far post and Bernholtz rose up to bang it home with a header for a 1-0 Titans’ lead.

The Demons looked to tie the game up but the back line of Eric Lain, Otto Billingsley and Finn Ramsey cut off all lanes to the Titans’ net and after 20 minutes of back and forth soccer, Crested Butte added to their lead when White got on the end of a cross from Rowan Featherman to knock a header past the Ridgway keeper in the 29th minute.

Crested Butte continued to press hard and after a flurry of shots, Kaiden Marziano jumped on a loose ball to punch it past the demon keeper for a 3-0 lead. Three minutes later Crested Butte struck again as Marziano dropped the ball to Pulliam and Pulliam crushed a line drive shot just under the cross bar from 30 yards out for a 4-0 Titans’ lead.

Crested Butte finished the first half off with one last goal as Barney slipped a pass near post to Gardner and Gardner flicked it in for a 5-0 Crested Butte lead at halftime.

“I think our pressure on the ball and good shape forced them into turnovers and to rush their plan,” says Piccaro.

The Demons came out in the second half more organized and moved the ball well through the midfield but the Titans were set with their lead for the game and countered with some possession of their own to finish the game with a 5-0 win.

“Our movement off of the ball and some great passes to our hungry strikers paid off and our conditioning and some awesome shots for a couple of goals took the wind out of their sails,” says Piccaro.

Crested Butte returns to action this Saturday, September 18 when they host CRMS at the school field at 1 p.m. for the Homecoming game. Until then, the Titans will step up their efforts to fine-tune their play.

“We need continued work on fundamentals, conditioning, passing, first touch, shots and our movement both on offense and defense,” says Piccaro.

The community is invited to join the Homecoming parade from Rainbow Park to the community school field Saturday, September 18 at 12:30 p.m.