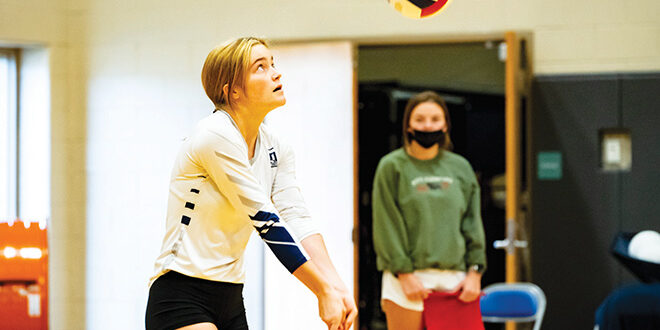 After falling to the Ridgway demons for the second time this year, the Crested Butte Titans volleyball team notched their second win of the season on Saturday before falling to an over-powering Telluride team on Tuesday.

Hopes were high, but still held in check when Crested Butte faced Ridgway. The team continued to improve since the last time they faced the Demons but their injury report did not as coach Cierra Abbott was forced once again to create another new rotation for the match.

The Titans were in every set of the match but there was only so much they could do playing alongside new players in new positions as they eventually fell in straight sets 25-19, 25-23 and 25-17.

“We had a series of injuries per usual and that caused a little bit of confusion,” says Abbott. “It was definitely not what we hoped for. The girls were hoping to step it up a notch in the rematch with Ridgway.”

The frustration of the loss carried over into workouts that week in a positive way though as the team took to practicing with a renewed intensity.

“They showed up to practice that week and you could just tell after that game that they wanted to put in more at practice,” says Abbott.
Crested Butte continued that effort when they hit the road to face Trinidad on Saturday, September 11.

“We got off to a great start,” says Abbott.

The Titans won the first two sets 25-22, 25-22 but another injury to the Crested Butte rotation had Abbott scrambling once again to find the right mix on the floor. The hiccup had a devastating effect on the team as they dropped the next two sets to leave the match up to a fifth and final set.

The fifth set is tricky as it only goes to 15 points leaving little room for error. Abbott took the time prior to the final set to remind her team that a quick start was tantamount to success.

Unfortunately, they fell behind 12-8 and were looking at letting the win slip away when Abbott called a timeout.

“We practice a lot on how to play when behind and I could tell they had a lack of confidence out there,” says Abbott.

The timeout was just what they needed as they broke the serve of Trinidad’s toughest server immediately following the it and then took over from there. They tied the match 12-12 but the official saw it otherwise. After some discussion, the official changed their mind and Hayes Freeman continued her serving onslaught to record an ace and the Titans sealed the 15-12 set win and the match. Blakely Reynolds led the team with six kills, Hayes Freeman had five kills and four aces and Annie Collins tallied four aces as well.

“After that injury mid-match I had to switch things up and it took them two sets to get used to it,” says Abbott. “They’re always happy to step up and are really supportive of each other on the court.”

While the win was sweet, the elation only lasted for two days as the Titans fell to the Telluride Miners in straight sets on Tuesday, September 14.

They head to South Park for their next match on Friday, September 17.