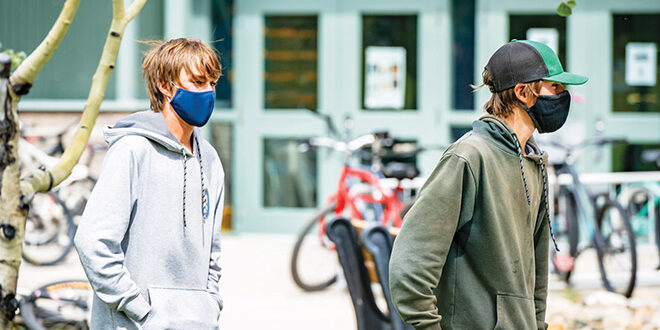 Lawsuit “frustrating” for the district

The Gunnison Watershed School District and superintendent Leslie Nichols are being sued over its recently issued indoor mask mandate. On October 7, Nichols and the district were served court summons papers informing them they were being sued in Gunnison District Court by David Justice, a Gunnison community member, Tomas Gomez, parent of two students at Crested Butte Community School, and Michael Spritzer and McKenna Basara, parents of a student at Lake School.

The school board approved the enactment of the indoor mask mandate during the September 13 meeting, which was well attended by those in opposition of the decision. According to the papers served, Justice filed an appeal on September 17 to the board to reconsider the mandate on grounds that its enactment constituted an unlawful policy. On October 4, his appeal was denied on merits that the mandate is an operational function of the superintendent distinguished from board policy.

After several back and forth emails between Justice, Nichols and the school board, the school district’s attorney stepped in.
“The Board has hired Dr. Nichols to oversee the day-to-day operations of the schools in accordance with applicable law, and has delegated her the authority to make decisions and recommendations that are in the best interests of students,” said the statement. “The decisions to require universal masking for staff and students is based on the guidance of national, state, and local public health officials and has been debated, discussed, and decided at public school board meetings where you and other members of the public have had an opportunity to participate via public comment. Your disagreement with the District’s decision is noted, but there is no right of appeal. You are welcome to voice your opinion during the public comment portion of our board meetings like any other member of the public. We consider this matter resolved and will not respond to further communications from you on this topic.”

However, the lawsuit was filed on October 7, questioning whether Nichols has the lawful right to implement such a mask mandate for the school district, and whether she followed proper protocol. The district’s attorney, Kristin Edgar of Boulder-based Caplan & Earnest that specializes in education law, is still reviewing the papers and has 21 days to respond.

“I find the lawsuit frustrating in that it’s an even greater distraction from the work of educating the kids of the Gunnison Valley than we already have with manning COVID,” said Nichols. “Our mask mandate falls under my powers as superintendent to create safe classrooms and schools.”

The plaintiffs also argue there has been no policy adopted by the board to predicate the mandate, and claim the board has adopted no policy for those denied admission into the schools for failing to comply with the mandate.

According to the paperwork, Basara said that her son has been twice denied entry into Lake School for refusing to wear a face mask despite medical and religious exemption forms, and she has been told that he will continue to be denied access until he wears a mask.
Nichols says the school district does provide an alternative for those students with the online Pathways program. “Absolutely we have an alternative, and we made that known to parents concerned about the mandate,” she said. “We did see an increase of about seven kids joining the Pathways program following the mask mandate.

“We would prefer that kids be in-person because we do value in-person learning, and we know in-person learning without masks is even better,” Nichols continued. “What adds to the frustration is that the mask mandate is not a condition that we see as permanent, it’s just a decision that we see as necessary to insure all risk reduction tools possible. We will continue to monitor it daily and use all of our risk reduction tools, and collaborate with public health to find the right time to return to schools without masks.”

Emails with requests for comment and answers to questions were sent to Justice, Gomez and the Spritzer-Basara couple on Tuesday. Gomez responded stating that he was speaking only for his family and not the other plaintiffs.

“First, the school board and superintendent have no legal authority to issue a mask mandate,” he stated in an email. “Second, the illegal mandate violates various personal liberties protected under the Colorado and U.S. Constitution. Finally, masking children is anti-science. The science shows that the potential harm of masking to children’s mental health and physical health far outweighs any benefits.  Masking children in school is also proven to be detrimental to their educational development, something that the school superintendent has admitted repeatedly.  She also touts the district staff’s 90%+ vaccination rate while providing no credible exit strategy for masking.

“My children are experiencing various negative health side effects of masking while simultaneously having their educational experience undermined,” Gomez continued. “In short, my children are being harmed. As a parent, I will vigorously defend my children’s rights as well as their mental and physical well-being to the fullest extent possible under the law. The United States is one of the only countries in the world imposing this on its youth. It is time we stop abusing American children under the false pretense of preventing the spread of COVID.”

Lawsuit plaintiff Mike Spritzer agreed with Gomez and said he sees adults that wear masks not using them properly while constantly touching them near the nose and then touching things and that results in more transmissions. “Now Imagine…if this is how adults perform the mask wearing…kids will be far more fluent in this transmissions,” he wrote in a lengthy email. “I can write about 20+ more pages on the Medical, Psycological, Dental, & Scientific. Religious etc. that masks under this style of mandating is overtly Harmful to ANY Human subjected to this. Whether voluntary or forced.

“Just because the CDC, FDA, and any others say so does not mean it is factually and medically so. (As they provide the population NO factual proof for this),” Spritzer continued. “They also have not provided the population one iota of factual useful information for masking. Why? Because they cannot provide this kind of info because it does not EXIST! 18 Months, not one fact, scientific, medical or other proof masking stops the viral transmission of Covid-19.” Masking is only a form of the breaking down of social, and medical, structure of society. As medically (and the other,) are proved masks are inefective. My position is against mask mandating, and facts back my positions! Medical & social reasoning is cause for our very aware stance.”

McKenna Basara said the suit is about being pro choice. “We are fighting this for all our children, staff/teachers that don’t want to mask up due to medical/religious/personal reasoning. I’m Pro Choice… our constitution gives us that right! I respect every teacher and staff to do as they choose same as a parent to their child.”

Justice restated that the plaintiffs believe the school district mask mandate is unlawful and Nichols and the board do not have the authority to implement such action. When asked why no similar action was taken last school year when a mask mandate was in place, Justice said that, “Time has enabled truth to come into focus.” He said the suit is simply asking that the mandate be lifted and/or that the board hold a meeting to hear his appeal on the decision. He said the plaintiffs are representing themselves and not using an attorney.

As part of the initial lawsuit, the plaintiffs asked Judge Steven Patrick to immediately lift the mask mandate and Patrick denied that request.