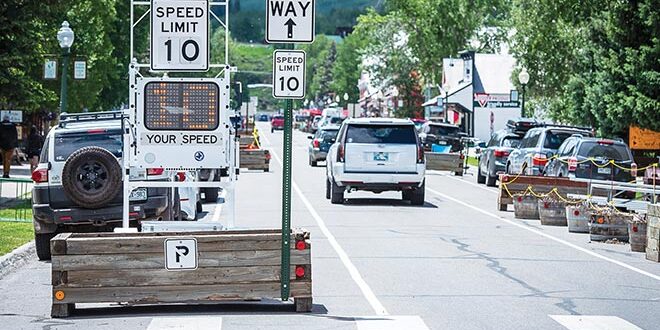 No easy answers but lots of debate expected

Outgoing Crested Butte mayor Jim Schmidt was probably right when he mentioned that the new town council will have a difficult political decision to make when it comes to whether to continue the one-way Elk Avenue reconfiguration next summer and whether to make permanent the parking management program started last summer. Those were the primary issues discussed at the November 15 council meeting and public opinion was split on the direction. The actual council decision on the matter is expected to be made in January or February of next year.

In the meantime, the winter parking program will start December 15 and run through the end of the ski season. There will be a few modifications from the summer management program. While two-hour parking will be enforced on Elk Avenue, vehicles will be allowed to park on Sopris and Maroon Avenues for at least a one-hour grace period before being given a ticket. The idea is to allow people to visit friends in the neighborhood and not immediately get a ticket. Some of the council advocated for allowing the grace period to be for two hours. If cars park on Sopris and Maroon longer than the grace period they will be given a ticket by parking management company Interstate Parking LLC.

Last summer, 788 tickets were issued by Interstate which raised $30,150 in revenue with another $10,000 outstanding. Data indicated there was more Elk Avenue parking available and less traffic on Sopris and Maroon while the Four-way Stop parking lot was underutilized.

The most public comment came over the Elk Avenue configuration in place the last two summers. The move to a one-way street allowed restaurants to utilize the street for seating which eliminated 38 parking spaces in the core business area. Started in the summer of 2020 when COVID health orders cut indoor capacities by 50 percent due to social distancing mandates, the effort successfully gave customers an open-air spot to dine in downtown Crested Butte. Given that success, the uncertainty of COVID-19 restrictions that might be imposed in 2021 and the overall acceptance of the change in 2020, council allowed the reconfiguration to take place again this past summer.

Some restaurant owners lauded the action, but several residents spoke out against the move as the summer wore on. At Monday’s town council meeting the discussion continued.

Town planner Mel Yemma said that sales tax collections for last summer were up 12 percent for restaurant and bars over 2019 (pre-COVID) and retail sales tax collections were up 18 percent. She said that by putting seating on the street instead of the sidewalks as in previous summers, pedestrian movement on Elk Avenue was easier. She admitted that some restaurants did not use their space for seating and feedback came back both pro and con from the businesses surveyed.

“It seems the feedback is split pretty much 50-50 on whether people liked it or not,” said Schmidt during the council work session. Yemma said in the limited response from a business survey, it was split 1/3, 1/3 and 1/3 between saying the reconfiguration helped their business, did not impact their business or hurt their business.

Incoming mayor Ian Billick requested more information on inside and outside capacity of restaurants, and information on increasing property tax bills on commercial property on Elk Avenue. Given several recent purchases, it is expected to rise significantly and could put a crimp in business margins. “Some people have also asked me if it’s necessary for Mountain Express buses to travel down Elk because it seems pretty tight,” Billick said. “I’m not sure how that works so would be looking for information.”

New councilperson Anna Fenerty noted that the town’s survey results indicated many people felt the reconfiguration fell short of expectations in a number of areas. Yemma said while the data shows improvements on speeds, congestion, parking availability, safety and business support, staff recognized the community and business feedback and perceptions vary a lot and they are digging deeper into the feedback to understand the key issues.

Councilperson Chris Haver said he too noticed the negative feedback and said he felt it was suggesting that if done again, the street should have a cleaner look. He asked if there was a reasonable fee to charge businesses using street seating that would actually encourage them to use it for seating and not as an empty space or for something like a game of corn hole. “If we do charge a fee, I think that money should go back to improving Elk Avenue with perhaps something like better trash pick-up,” he said. “Another thing to consider is that we are a bike town and it is hard to not allow bikes to go both ways on Elk Avenue.”

Yemma said the unfortunate reality was that space considerations made biking both ways not likely if the reconfiguration was implemented.

Haver, who owns a bed and breakfast, said most tourists appreciated the street seating and Haver wondered what would happen to already long wait times if the extra outdoor seating wasn’t available given the increase in visitor numbers.

“I personally love eating outside,” said Schmidt. “I think it would have been a problem last summer without the extra seating on the streets.”

Councilperson Jason MacMillan said that while the outdoor seating provided seating, the primary issue was a staffing shortage. “I’d like more information if possible, on staffing projections for the summer,” he said. “It seems having more seating exacerbated the problem at times given how short staffed some places already were.”

Fenerty wanted to ensure that special events coordinators were accommodated with any reconfiguration. Yemma said many special events were moved or not held last summer but the street configuration was one of many reasons. “I think we can work through most of their issues,” she said.

Councilperson Mona Merrill said her prime focus was to keep Elk Avenue a vibrant place to be. “With so much restaurant turnover I do worry about what will be open and the vibrancy of downtown. We need to keep the vibe of Crested Butte,” she said.

During the public comment portion of the council meeting, citizens spoke for and against the parking and configuration changes.

Public weigh in
“This privatization of our public streets is wrong,” said Eric Davis. “I don’t like it being under the purview of an out-of-town corporation. I don’t think turning over our public spaces to for-profit corporations is very Crested Butte.”

Drew Henry of The Dogwood said the first year of the Elk Avenue reconfiguration was a blessing. “We were incredibly relieved when that decision was made,” he said. “Now it helps take care of the growing number of people in town. More seating actually helps us with the staff shortage since we can do things like leave a table unbussed a little longer. It is harder and harder to run a small business in town between higher property taxes, higher wages and the cost of goods that have skyrocketed. The patio program helps.”

Stuart Lee of the Secret Stash said the volume of tourists coming to the town is not going to decrease. “Change is inevitable,” he said. “Breckenridge closed its main street and that may be in Crested Butte’s future. Other mountain towns have done it and that’s the ultimate solution here once we have the infrastructure for a total pedestrian mall. The volume will come no matter what we do. Crested Butte is going to change and we need to be proactive.”

Citizen Kent Cowherd offered that it could work both ways. “Instead of having patios extending 12 feet into the street, limit it to eight feet,” he suggested. “Then you can have two-way traffic and street seating. This is also public property so there is a fairness aspect to consider. It feels like you should discuss a fee for providing that.”

Audrey Anderson said she was against the street reconfiguration and parking management plan. “We are giving our public property to businesses. Making decisions on profit instead of community. That doesn’t make us a small town anymore. It makes us a profit-oriented city,” she said.

Matthew Price of the Tin Cup Eatery said he didn’t participate in street seating last summer because he didn’t want to make the investment in furniture until it was a sure thing it would last more than one year. “If there’s a commitment from the city we’ll commit to that seating. Tourists are the heartbeat of Crested Butte. I understand it benefits the businesses, but it is harder and harder to make a living here. We need to look forward, not backward. It will only get busier. You can’t build a wall around town.”
Michael Suter of the Secret Stash agreed. “There is an onslaught of guests coming and we need to serve them. Without providing good service, Crested Butte’s tourist reputation will be diminished. Plus, the pandemic isn’t over. It’s not all about money but we need to make a living.”

Kyleena Falzone of the Secret Stash and Bonez said if the restaurants could survive on just local business that would be great, but that isn’t the case. “We are open in the offseason and losing $22,000 a week right now. We need the money from the tourists to carry us through. Locals only can’t sustain us,” she explained while letting council know she had an online petition with 862 signatures supporting the continuation of the reconfiguration. “As for the equity, you can’t compare the Stash to a much smaller business. Our property taxes are huge and our payroll is approaching $2 million. We push people to other restaurants and to the retail shops in town. Taking away Elk Avenue seating is a serious issue for a lot of people. It’s not just about me. It’s about the experience. I’ll keep working for this.”

No one doubted she would. The discussion will continue into early 2020.

“Good luck,” stated Schmidt to the council after the work session. “It looks like when you make the decision you’ll be making half the people happy.”