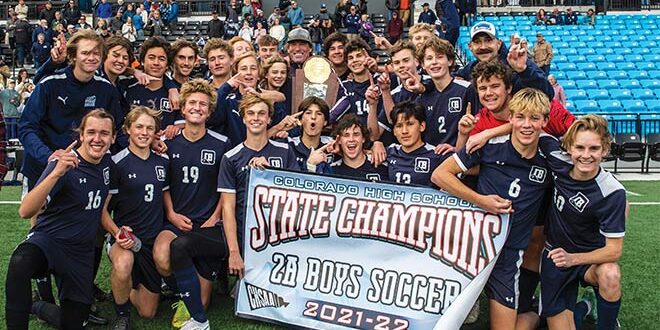 “But, even a blind squirrel gets the acorn some days.”

The Crested Butte Titans boys soccer team won their second 2A state title in a row at Weidner Field in Colorado Springs on Saturday, November 13.

It has been quite the post-season run for Crested Butte. After winning their opening state tournament match 8-0 over Denver Lutheran, the Titans edged out a 1-0 overtime win against Telluride in the quarterfinals and then scored two goals in the final two minutes of the semifinals to beat Ridgway 2-1.

Now they had to step back into the world of Front Range competition as they were set to face the Lotus School for Excellence in the 2A state championship game. The Titans spent the week preparing for Lotus and workouts were focused the entire week.
“We were expecting a stout and fast opponent,” says coach Bob Piccaro. “We had a very productive week for the practices. The kids were focused and we had an increasing sense of belief in the team rising to the challenge to finish this run off.”

Just prior to the start of the match, Lotus’ roster appeared smaller than in the semis and it was discovered that they were missing some starters due to COVID quarantine. And while Crested Butte had spent all week preparing for the team they saw play in the semis, they stayed with the plan rather than adjust last minute.

“They were missing a couple very key players, but we stuck to our game plan, including lineups and subbing strategies,” says Piccaro.

“Even after we learned that, we knew they’d still be a challenging opponent,” says senior captain and goalkeeper Cedar Fessenden.
Touches on the ball were loose during the first half and while the Titans had been there before, they appeared nervous and hesitant through the first half as Lotus’ team defense kept the Titans off balance. Fortunately, the defense of Otto Billingsley, Eric Lain and Finn Ramsey were on point as they had been all season and Baden Garmhausen came off the bench into the midfield to help hold off Lotus’ top player.

Lotus did get close on a couple of corner kicks but the work of Ben Barney with clearing headers and a save by Fessenden in traffic held off any chance for Lotus to finish and the teams headed into halftime tied 0-0.

“We were reactive, not proactive, waiting for things to happen instead of making it happen,” says Piccaro. “As coach Than put it at his halftime talk, ‘We are playing scared.’“

Crested Butte picked up the pace in the second half with Brendan Hartigan, Davis McNeill and Jamis Matlock winning battles at midfield and looking to open the game up using Ace Gaither and Nathan Sawyer on the flanks. And despite the efforts of Jacob Bernholtz, Blue Gardner, Grayson White and Kaiden Marziano up top, Lotus was resolute in their efforts to hold off the Titans’ attack and their goalie made the needed saves to keep Crested Butte scoreless through the first 25 minutes of the second half.
“Everyone was playing up to where they could,” says Fessenden. “And after what we witnessed against Ridgway the offense just likes to take its time up there, so I wasn’t stressing too much.”

Crested Butte stuck to their game plan though and with Titan subs coming in and providing key energy to the team once again, the Titans eventually wore Lotus down and finally cracked the seal on the Lotus net in the 67th minute of the game. The work of Rowan Featherman on the flank forced a corner kick and Featherman sent a perfect ball into the 18-yard box for McNeill to rise up and head into the upper corner for a 1-0 Titans’ lead.

“I did not see a sense of panic, but more of a sense of urgency in taking it to the other team, something they should’ve been doing all game long,” says Piccaro. “Everyone turned it up a notch and, as in weeks past, we eventually over powered them and wore them down.”

That first goal turned the tide in Crested Butte’s favor the remainder of the game and they struck again two minutes later when a diving header by Trent Pulliam found Hartigan open inside the 18-yard box. The Lotus keeper denied Hartigan’s initial volley but Bernholtz followed the rebound to tuck away the insurance goal for the 2-0 win and yet another late game surge paved the way for the Titans’ title.

“Conditioning, playing as a unit and following the scripted plan were the keys to our late game success during the tournament,” says Piccaro. “We played as a team, not as an individual doing it here and there, and eventually wore down the opponents. Also, some OT wins earlier in the year helped us deal with the stress of games being decided so late in the match.”

Having won their second 2A title in a row, and third in four years, Piccaro points out there are never any guarantees and this one is as special as any of them.

“It is so hard to repeat, let alone win three in four years, and as a coach, you wonder if the bubble will burst, if the momentum will go away, even when it shouldn’t, because it happens,” says Piccaro. “And then you worry about injuries and sickness. But, even a blind squirrel gets the acorn some days.”

“This one I’m most proud of,” adds Fessenden. “They were all amazing but this one feels the best, being a part of the core group of players and being the captain.”