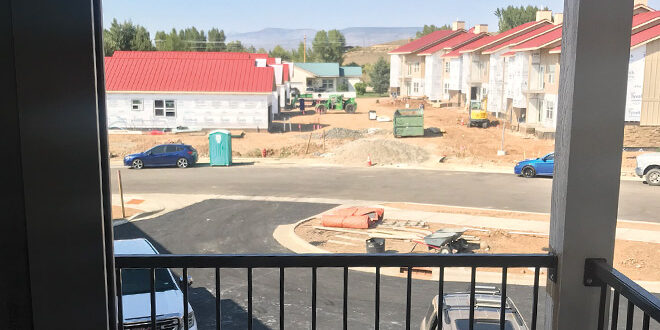 Paintbrush picks up speed with approvals and move-ins

The 77-unit Paintbrush affordable housing project located near the Gunnison Rec Center has residents moving in and more units being approved this week. As of Tuesday, November 16, 13 units have people living in them, probably with a lot of boxes to still be emptied. On Monday, the project received Certificate of Occupancy (CO) approval for a 16-unit building as well.

“The next push is to have another 16-unit building approved by this Friday, November 19,” said Paintbrush developer Gary Gates. “We had three tri-plexes and a four-plex approved last month. Six of those units were occupied with new permanent residents. Three others were being used to house a dozen of my workers from Houston who are here to finish up the development.

“Vail Resorts and Gunnison Valley Health both have master lease arrangements, and are moving some employees into the other four,” Gates continued. “With the first 16-unit building approved Monday afternoon we have seven renters moving in Tuesday and another nine by this weekend.”

Gates said there are an additional 15 applicants that have met all the qualifications of the deed restrictions and can move in when a unit is complete. “We have another 16 applications in hand that we are reviewing and at least another 30 out being completed by applicants. We are on track to approve two or three a day,” he explained.

With the expected approvals, Gates said there would be 45 open units ready to go before Thanksgiving week. “The end of any project is a flurry of activity and there’s a lot going on right now but the fact we have people moving into finished units before the ski season is a big win,” he said.

Frustrated with CB proposal
Gates has indicated that part of his professional passion is to work on affordable housing in the valley. He was bruised up over the outcome of the Corner at Brush Creek proposal but hopes to possibly be involved with the county’s Whetstone affordable housing project across from Brush Creek and the town of Crested Butte’s Sixth and Butte housing project that just released a Request for Proposals (RFP) last Friday. Crested Butte community development director Troy Russ said the Sixth and Butte RFP outlines a request for approximately 35-45 rental apartments and 28-32 home ownership units. The deadline to return the RFP is February 18, 2022.

“Honestly I was a little disappointed in reviewing the RFP,” Gates stated by email Tuesday. “My business model is to move fast. This usually requires little taxpayer assistance. But they’ve structured this proposal (especially with the “99 year lease,” which I didn’t see coming) in such a way that it will require someone having to seek Federal tax credits and State subsidies. Those things are achievable for those who specialize in that, but the problem is it will take two to three years to even start and two years after that to have occupancy.”

The 14-building Paintbrush project started construction in July of 2020 and will be completed before the end of the year. Gates said his advantage is that he has the resources to make all the decisions so once he commits to a project, it can move quickly. “I move fast and do exactly as I say. That’s why even during the COVID pandemic, my lenders continue to fund me for acquisitions,” he said noting that he now owns more than 9,000 apartment units, mostly in Houston.

He says Crested Butte will find a developer that fits their project, but the housing crisis is immediate and that the town’s template will take years to finish. “It will be very costly to the taxpayers and provide no additional units than what I would do in a third of the time and at a much lower cost. In four years, the crisis will only be exasperated.

“I was hoping to submit something along the lines of 61 rentals (giving them all the restricted units they have requested) and 13 ‘for-sale’ units at around $275-$300 per foot,” Gates continued. “Based on no cost for land and no 99 year lease I would have the 61 rental units on the ground in 9-12 months from permit and all the for sale units in 3-6 months after that. I would meet all BOZAR requests. Money and construction teams were ready to start. Hopefully the Whetstone project will not have surprises like that.”

Russ said he couldn’t comment on an open RFP but a pre-proposal conference was scheduled for December on the project where questions were expected and could be addressed. Crested Butte planner Mel Yemma added that the Sixth and Butte project “seeks to balance deep affordability and an efficient timeframe.”