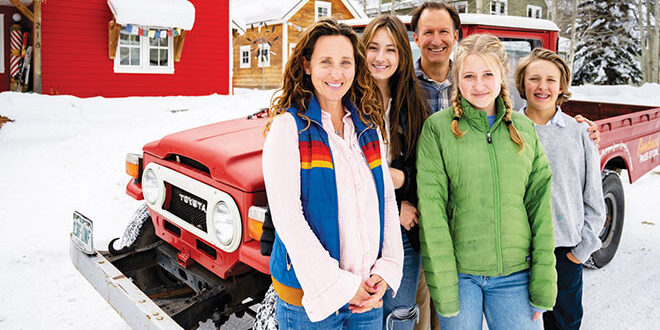 The classic red Jackson’s pickup truck has been seen cruising around town a lot more in the past six months, and for good reason. Scott and Megan Reamer, founders of the popular sweet potato chip company (formerly Jackson’s Honest), have recently settled back in to Crested Butte life full-time with their children Charlie and Olivia after several years of being away both for business needs and for personal reasons. As they celebrate some recent business milestones and being back in the place they call home, they are also celebrating the life of their late son Jackson in a new way with a tribute to other superhero kids enduring tough health realities. And they would love to include some kids from the Gunnison Valley in their Everyday Superheroes spotlight.

Jackson’s started in 2013. The Reamer family had responded to their son Jackson’s rare autoimmune disease with a low inflammation, high fat diet and discovered that they didn’t have to give up entirely on snack foods in the process. They were making a particularly delicious snack right in their kitchen: sweet potato chips slow cooked in coconut oil. The chips were a hit and the business has been growing ever since, adding additional flavors and products and moving production out of the family kitchen and most recently to a brand new facility in Muskego, Wisconsin. The production facility just opened in August 2021 after about a year of construction.

“For us it’s been like a homerun,” says Scott.

The previous several years led the Reamers to several different production and packaging locations, which in combination with Jackson’s specialized medical needs, had the family living in Boulder from 2015 until they moved back to Crested Butte in May 2021.

“To pay people to make food for your brand is just incredibly expensive,” says Scott of trying to find a place to increase production and provide commercial packaging. “The need for a bigger building was expected to be about 10 years out. But then we grew so fast, and found capital investment,” says Scott. The couple had a successful run on the TV show Shark Tank in 2017. “So now we have the financial flexibility of making our own products. And it’s also the same quality as when it was us making it all in our kitchen.”

The new facility can produce 110 bags of chips per minute, which is quite an increase from the original setup. “When we made our first 60 bags for Cini (Jackson), the owner at Mountain Earth, it took us two weeks,” recalls Scott of the early days.

The company has branched out from its original chips, with four flavors (all sweet potato) that include coconut and avocado oil, both considered ancestral oils. Scott says they hear a lot from people who want to bring back other flavors they have tried, particularly the purple heirloom potatoes. “We had to simplify,” says Scott, but he adds that they do hope to revisit those other potato types in the future.
“For now, having a state of the art facility close to Chicago and direct lines to potato suppliers all over the Midwest has really been a game changer,” he says.

Superheroes
But the Reamers are happy to be back home in CB where it all started. And after working through the difficulty of losing Jackson, who passed away in 2017, the family has found a way to continue his legacy by recognizing other kids. This program is called Everyday Superheroes, which launched in August 2021.

“We’ve always as a business had a foundation and supported kids with special needs, but also different causes such as the organization that supports education and research to find a cure for the autoimmune disease that [Jackson] had,” says Megan. The new addition is meant to more visibly “showcase kids who are making a difference in their own lives and in other people’s lives.”

The platform is built to promote and encourage kids and their everyday acts of kindness. “Super” kids who are doing super things for the world can be tagged themselves or through their parents using #EverydaySuperhero on Instagram or nominated using the form on Jackson’s website (jacksonschips.com/pages/everyday-superhero). They might be featured on Jackson’s social media, and even receive a SuperSnack SnackPack to show the company’s appreciation for all they do.

Megan says the response to the Everyday Superheroes in just the first four months has been great. “A lot of it has been organic, such as people speaking about it on social media and seeing it on our packaging and submitting nominees. And we really just celebrate every one that we receive…we’ve been really excited by the grassroots of the program itself.”

“Jackson is the inspiration,” says Scott. “Jackson suffered every day of his life in so many ways. It robbed him of laughing and sleeping well and pain free days. Things we all take for granted. There is a quiet but profound heroism in that. And he left this world, but the business kept on going.”

Megan and Scott say that at first they had a hard time managing how to incorporate their son’s passing into the ongoing business. They describe incredible kindness, even from strangers. “But we didn’t know how to respond to that from a business standpoint,” says Scott. “We had some great employees who still knew how to do the business. But how do you talk about that aspect?”

He says an outside perspective helped them see how to proceed.

“Jackson was a hero just for living through his disease. And plenty of other parents who have kids who have orphan [rare] diseases, they are also heroes just for showing up and helping their children in such an uncertain environment, often not even knowing what they have.”
Scott and Megan also note that siblings play a hero role, as their three other children have done. They tell stories of how their two daughters and their other son “helped Jackson in profound ways,” taking him ice skating and to parties, taking pictures with him and being his eyes and ears on a daily basis.

“We realized that whatever challenges he had, those challenges are replicated across the world,” says Scott. “And all of those people that touched that person, they are all heroes in some way as well.”

“For Megan and I personally, as parents and indirectly as entrepreneurs, that was the way we could incorporate his passing and not have [the program] be heavy but be as uplifting as we now, four years later, feel that it is.” He says for a time after losing Jackson, that sense of something uplifting would not have been possible. “The grief would have simply been too vicious.”

With time and distance, however, “This feels like a really respectful and empathetic way to incorporate his loss into a business that we absolutely still want to thrive and be his legacy.”

Going local
“It would be personally really incredible to get some nominees from the valley,” says Scott of the new Everyday Superheroes program. “Nothing would make us more proud than to highlight the incredible people here. Central to the success of the business and to Jackson’s quality of life was living here and having incredible neighbors and friends who were supportive and would see him out at the post office and say, ‘hey Jackson! What’s going on?’ That kind of stuff is invaluable when you’re living with that kind of challenge—both to the caregiver and the person suffering.”

Megan agrees. “We’ve just had so much support from our community throughout Jackson’s entire journey, and then when we were on Shark Tank, and that crew came to Crested Butte to show different pieces of our community and people within it. It’s just an additional support that we can provide back to the community for all the support we’ve received.”

The Reamers say they consider the program a permanent aspect of the brand. “The essence of Jackson’s as a brand, and certainly Jackson as our son, really is this fantastic root of who we are and what our mission is and how we continue to go out in the world and spread that cause,” says Megan.

“That sort of tragedy is not ever something you want to go through. But in the spirit of making lemons into lemonade, we are ready to take the business to the next level…it has been gratifying to take that step back and then take a couple steps forward,” says Scott.

With their oldest daughter Ella now attending college in California, Olivia in ninth grade and Charlie in sixth grade at the CB Community School, Megan says the best thing about being back full-time is simple: “It’s just being able to take a breath. We are certainly closer to everything we love to do…but just being able to take a breath and be home and dial it back a little bit. And feel really supported.”

Scott adds that for the kids, “who had been advocating for years to come back,” they have kept their friends over the years and now they can participate in activities and team sports more fully.

“There’s a different dimension to their lives now. Seeing their friends and our friends and cheering together at a volleyball game is a really nice feeling,” says Scott. He still travels to the facility in Wisconsin about once a month to manage on-site operations, and Megan travels there about every two to three weeks for the sales/marketing side of the business.

“That whole process of losing Jackson, starting the business in his name; it was always a CB-based company,” says Scott.

“We’re still the family brand that we were when we started,” says Megan. “It’s all in a really great place.”

To read about the #EverydaySuperheroes or to nominate someone, visit https://jacksonschips.com/pages/everyday-superhero
Locally, Jackson’s chips can be found at Mountain Earth Organic Grocery in Crested Butte.