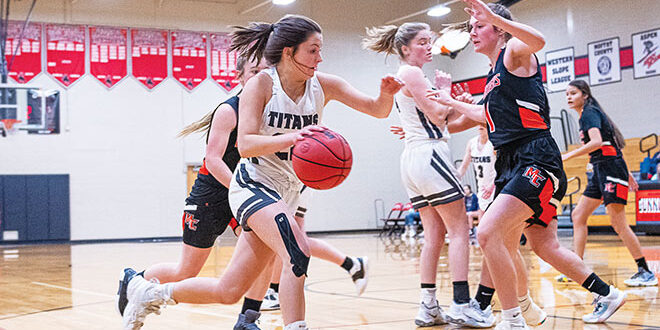 Titan girls basketball remain on a roll early in the season

Win two of three over weekend

It started with the Telluride Miners on Friday in Gunnison. The Miners were an admirable opponent last year but lost two of their star players to graduation and were noticeably depleted Friday night.

Crested Butte jumped out to an 9-1 lead in the first quarter with the only thing holding them back from more points being a handful of missed lay ups. They continued to push and with Hayes Freeman dominating the boards and the defense of Mara Pennie and Grace Bogard shutting off all access to the hoop from the wings, the Titans built a 25-1 lead by halftime.

Crested Butte eased off of the throttle a bit in the second half with the highlight of the game coming midway through the third quarter when a series of quick passes up court set up Taylor Johnson for a lay up. Crested Butte would ultimately cruise to a 41-2 win.

“Everyone on our team scored so that was really good,” says coach Amanda Reynolds. “The game gave us a chance to continue work on offensive and defensive movement.”

Crested Butte returned to the floor Saturday morning to face the Montezuma-Cortez Panthers and struggled from the opening tip off. Crested Butte fell behind 14-6 after the first quarter and proceeded to fall further behind entering halftime down 34-10.

“We came out slow in that game and Cortez is a good team and you could tell they’ve been playing together a long time,” says Reynolds.
The Titans did regroup enough to score 18 points in the second half but still fell to the Panthers 58-28.

“We did have some players step up and if we play to our potential, that’s a 10 or 15-point game, not a 30-point game,” says Reynolds. “It was an opportunity for the players to learn even more.”

Crested Butte closed out their three-game stretch over 20 hours against the Steamboat Springs Sailors and knew it was going to be another tough match up, but one that was well within reach.

Reynolds switched things up with her starting line up as well as decided that she would run just six players the entire game barring any foul trouble issues. While the move was risky and teetered on falling apart, the Titans remained focused and disciplined throughout the entire game.

The teams closed the first quarter tied 10-10 and the Titans built a slim 23-19 lead by halftime as Steamboat’s press appeared to have little effect on the Titans.

“We broke their press like we had been breaking the press for years,” says Reynolds.

Still, there was one major issue as Steamboat’s top player had scored 18 points in the first half alone so Reynolds had to make a call.
“We switched our defense up during halftime,” says Reynolds. “We had a three-point lead and I was afraid that the change could blow up on us.”

And while the game hung in the balance with Steamboat taking a 31-29 lead into the fourth quarter, the Titans stuck to their plan. Things got even more dubious as Steamboat started finding their shot from three-point range but Crested Butte kept on battling.

“They got hot from the arc and a lot of teams would have folded in that fourth quarter but we didn’t,” says Reynolds.

Rebounding and composure with the ball paced the way for the Titans’ ability to hold Steamboat in check and as the game was winding down, the two teams were in a tight battle. Blakeley Reynolds came through knocking down six of seven free throws down the stretch as the Titans finished off the Sailors 47-46. Reynolds led the team with 31 points while three other players scored season high points and Blakeley, Pennie, Taylor Johnson and Hayes Freeman dominated the boards.

“We had to hit critical shots and have critical stops on the other end and this team answered in every way during the game,” says Reynolds. “We stayed in it because they all did their jobs. It was one of the funnest games I’ve ever been a part of.”

“It was a really good way to go into the break,” says Reynolds. “We’re really coming together as a team.”

Share
Previous The specialness of a Crested Butte Christmas
Next Celebrating growth and moving home: Jackson’s founders kick off a new way to honor their son’s legacy