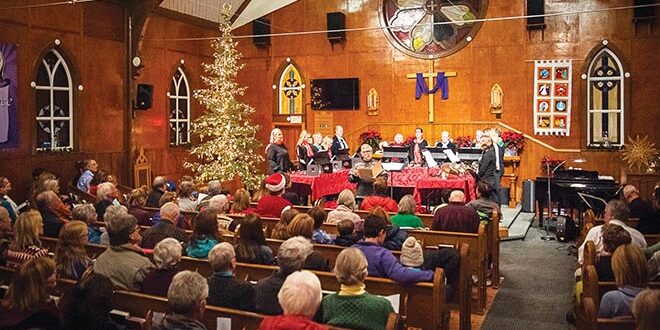 The specialness of a Crested Butte Christmas

From mining days to today….

et’s be honest, it’s been a tough year or so and although the pandemic has kept us from celebrating so many holidays with friends and family, the vaccines have somewhat opened doors, or at least cracked those doors ajar a bit for family gatherings. Christmas has taken on a reborn form, it seems even more joyous in its simplicity and spiritually renewed in its original es- sence in bringing us together. The celebra- tions were always about family, sharing, camaraderie, life and gratitude.

In Crested Butte’s early mining days, everyone was poor, but as one old timer aptly put it, “We didn’t know we were poor because everyone was.” But what they had was community, much like we have today, only with deeper snow perhaps and a hard- er way of life without all the amenities and modern comforts we have in our era. Still, we can be glad for the place we’ve chosen to live, among friends and a special sort of family called Crested Butte.

The OG Xmas in CB

Born in CB during the 1940s, Trudy Yaklich grew up in simple times when we were still a mining town. “We always had a big Christmas tree in the middle of Elk Avenue,” she says and notes that the old timers just called it Main Street back then. “People didn’t drive around so the tree could be in the middle of the street. There were lights on it, the town would do that. Church was always real important. We went to midnight mass and that was a re- ally special thing. In CB at that time, every- body was poor and so you didn’t have a lot of clothes, but you always got a new outfit at Christmas.”

Trudy also recalls how prominent
a role the school Christmas program played. “The Christmas play was huge and everybody in every class was in it. Since our school was so small you had to have two and three parts,” she laughs. “It was usually some touching Christmas story or more humorous,” she says of the elemen- tary class event. “The high school kids did the Christmas concert. Everybody played something. CB kids had to do everything whether you wanted or not. If you weren’t in band, there wouldn’t be a band. Every- body was in everything,” Trudy says of the 1950s classes. “After the play, Santa came and brought us stockings filled with hard candy, oranges and nuts. In those days
that was very special because we didn’t

have sugar candy or processed sweets very much, we had home canned fruit.”

Food, the glue that holds traditions and memories, was a big part of the holi- day celebrations and Trudy recalls baking a lot of cookies and the Slavic dessert staple of potica, a sweet baked bread rolled with spices and sugar. “On Christmas Eve we had a very simple dinner, usually vegetable soup, the best in the world, and homemade bread,” Trudy remembers. “Christmas was the big day. We’d have the feast consisting of turkey or sometimes ham with sweet and white potatoes with ham gravy, peas and Parkerhouse rolls, sweet fruit salads with whipped cream. We didn’t have veg- gie salads in the winter ever because that was for summer when you had your own lettuce. Christmas morning, we always had potica and Kielbasa, which was typical for most of the CB Slavic community. It was very good because it was simple and then the ladies could then get to their cook-
ing and you could go open presents after breakfast.”

Trudy also recalls that as kids, there were presents under the tree from both Santa and from family. “On Christmas day, you got up at first light. The Santa presents were not wrapped and appeared magi- cally in the middle of the night, the ones you wrote the letters for. The wrapped
gifts were from family. In my time, there were no toy stores in town,” she recalls the time when there were no shops downtown except for Tony’s and Stefanic’s. “Every- thing came from Monkey Wards catalogs (Montgomery Ward). That’s where we got our babies from, too,” she laughs at the ex- planation their parents gave as to where ba- bies came from. “Catalog ordering created havoc sometimes because sometimes they were out of those items the kids wanted or it arrived broken and by then it was too late to do anything about it,” she notes of the pre-Amazon days of overnight shipping. “What that meant was that mom and dad were up very, very late putting those things together because nothing came assembled.”

On Christmas Day, the town kids would visit every house in town, accord- ing to old time locals, making sure they’d get to the older peoples’ homes to wish them happy holidays. “They’d give us a quarter or cookies and that was a Crested Butte tradition,” Trudy reflects on when the town was much smaller. “We were a very close community. It was an honorable thing for kids to do and it kept that connection between the old people and the young people.”

Other town-wide Christmas Day traditions for kids revolved around snow,

of course – sled rides and skiing – back before a ski area was even a thought. “We would climb Chocolate Peak, up the old Kebler Road and ski or sled down Kebler because there weren’t any cars,” she says about the mound now commonly known as Hippie Hill or Prospect Point overlooking town. “We’d also ski down from the top of Maroon Avenue.”

After the ski area opened in 1962, a new wave of residents moved to Crested Butte who were labeled as hippies and ski bums, which was a realistic definition. One of those new free spirit pioneers was Glo Cunningham who back in 1975, started a Christmas brunch for the wayward and or- phans of holidays. “I didn’t want anyone to spend Christmas alone,” she says, having spent her first one in town by herself.

Glo’s first party crammed 29 peo-
ple into a 430-square-foot house, where everyone was served eggs. Later, it moved from the Eldo, to the Grubstake, to the Elk Mountain Lodge, to the Talk of the Town (which was known as the Plum). “I did most of the food for the first five years and people brought champagne and a grab bag gift,” she tells, but when it got to the point that she never left the kitchen, she decided to make it a potluck. One of her long- standing traditions was the Christmas grab bag gift. Originally, it had to be a re-gift, handmade or thrift store item and no more than $5. Decades later, the grab bag cost was topped off at $10 and she laughs about how some gifts returned yearly. “It’s cool because we saw the same gift come back over and over again through the years. One particular gift was a plastic hamburger and another one was this really ugly angel. Peo- ple would save it for the year and give it back at the party,” and Glo points out that everyone, yes, the entire town, was invited.

Post mining and hippie
era locals have modified the family traditions they brought with them or created their own traditions fit for a busy ski resort. Adge Marz Lindsey keeps her Italian heritage with a version
of the traditional Christmas Eve feast of the “seven fishes” and then, as many locals do, heads
to the slopes on Christmas day morn to ski. “It’s usually the quietest day of winter on the mountain. Rob and I feel like we have it all to ourselves,” she says, but having their daughter also created new traditions. “We tried the Christmas tree cut down tra- dition. It worked until our hippie child Galena cried her eyes out the day we went out to cut a tree, I mean, full on hugging a tree and yelling, ‘You can’t cut down

a tree! They are alive! We cannot do this
to them!’” So, they decided on a Charlie Brown tree that had already fallen, which satisfied their environmentally conscious kid. “We carried a decrepit, needleless dead tree to the car. It was hilarious. So now we save dead trees and make them Christmas trees.”

Tracy Williams Hastings tells, “We always have family craft night where we get out the hot glue guns, glitter and paints. Each year’s craft is different and it’s one of our most memorable nights of the holiday season. We always ski on Christmas morn- ing, then open presents later.”

Food will forever be an integral part of the holidays, and that hasn’t changed since town’s miner families gathered to slice
the potica. Mandy Frankman Sciortino’s Christmas tradition is playing bells with the bell choir at the 4 p.m. UCC Christmas Eve service. “Then we have dinner with friends and family. Most times we go to Slogar, then eat leftover chicken and waf- fles for Christmas day breakfast.”

Bus driver musician Melanie Hall cooks a Thai food feast. “Ten years ago at Christmas, Kevin and I had just returned from a trip to Southeast Asia, including Thai cooking classes, and it’s been a theme ever since.”

Elise Meiers reflects on the positiv-
ity of holiday gatherings, “The beauty of being away from blood family during the holidays is that you make your own (tradi- tions). One of my problems with living
so far from family is lack of tradition and forced family gathering,” she says. “There’s something about having to go see family you may not see eye-to-eye with that helps build empathy and character and while we’ve chosen our family here, the idea of putting on nicer clothes, sharing gifts of food and gathering around one table are just as important. It’s not just a holiday party, but a real family gathering I look forward to every year.”

Christmases in Crested Butte have al- ways been a time of gathering and laughter from the mining families who founded our town to the current visitors who bring their families to experience the real deal, practi- cally storybook holiday here. Before your children grow old, before your parents pass on in their journey, take the time to com- mit to celebration and if you don’t have traditions, create them anew. Most Buttians know, it’s not about the gifts or stress-
ful time carved out from a busy life, it’s about connectivity. It’s about the love. It’s about the life we’ve chosen here. May your Christmas always be white and steeped in deep powder. 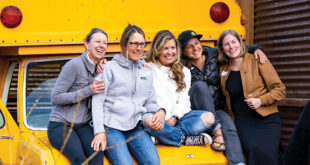 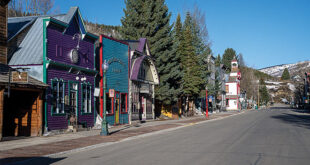 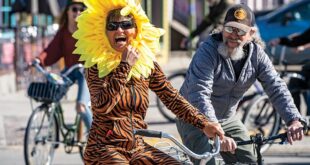