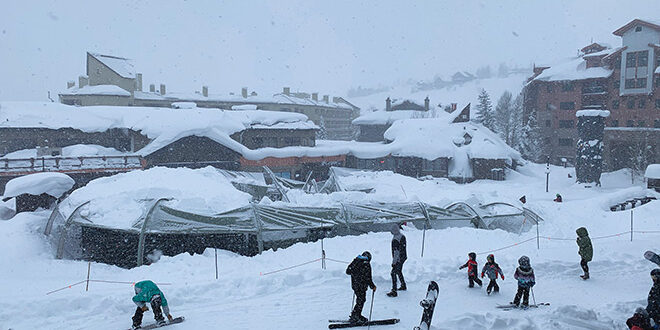 Tent structure destroyed but no injuries in late afternoon incident

What could have been a human tragedy on New Year’s Eve turned into a simple structural catastrophe shortly after the ski area closed for the day on December 31. The big tent located in the Crested Butte Mountain Resort base area near the Treasury Center collapsed as a result of heavy snow pile-up on the roof. The so-called “Sprung Structure” was the location for a winter ski valet operation owned by CBMR and housed a putt-putt golf course in the summer.

Witnesses near the area said they heard an extremely loud noise about 4 o’clock on Friday and saw snow debris shooting up from the area. The north end of the tent near the Adaptive Sports building was owned by Vail Resorts and had collapsed, but the entry to the ski valet area remained intact.

CBMR and Park City senior manager of communications Jessica Miller said that, “Shortly after 4 p.m. on Friday, December 31, the Sprung Structure located at the base of Crested Butte Mountain Resort (CBMR) collapsed due to the weight of the snow from the recent snow storms. There were no injuries. CBMR Ski Patrol and local emergency response agencies responded quickly after being notified.”

CBMR personnel immediately asked if skiers in the area knew if people or members of their group were under the structure at the time of the collapse. No one said they saw people beneath the tent at the time of the incident, but CBMR ski patrol members immediately began avalanche recovery operations and were seen using avalanche probes in a grid pattern to search for people potentially buried in the snow and structural debris. They also brought in avalanche rescue dog teams to alert of any signs of buried victims before clearing the area.

Crested Butte Fire Protection District chief Rob Weisbaum said they received a call about the structure collapse through dispatch and sent both fire and EMT personnel. “While en route, we were notified that Ski Patrol was on scene,” he said. “On arrival, we were met by a CBMR representative who provided a situational update. Ski Patrollers were probing the area despite having a high probability of knowing that no one was buried by the collapse. At that point, CBFPD was there standing by and prepared to offer additional support as needed.

“Ski Patrol completed their probe line and cleared the area,” Weisbaum continued. “As a collective effort, we determined the structure was still unstable and the snow load resting on the tent was problematic. At that time, the decision was made to cut the canvas to release the snow and stress on the structure of the tent. No one was injured in the incident and CBFPD was cleared a little before 5 o’clock.

Vail Resorts director of communications Lindsay Hogan said Vail Resorts is investigating the incident. “The Sprung Structure is a snow shedding structure that is designed to withstand high winds and snow loads,” she said. “Our Health and Safety Team is conducting an investigation, and we can provide more information after the investigation has completed. We have temporarily suspended Ski Valet services at the Sprung Structure while we identify a new location. In the meantime, Ski Valet will be available for pick up only in the lower level of the Treasury Building.”