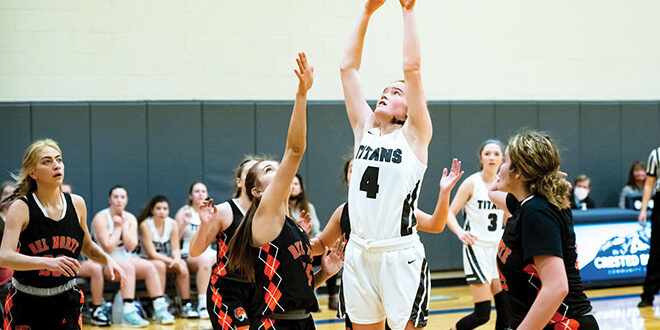 Take down Lake City and Trinidad

Amidst a couple of losses to league standouts Del Norte and Sanford, the Crested Butte Titans girls basketball team also rattled off wins over Lake City and Trinidad to wrap up what was a frantic five days of basketball.

The four-game stretch started with Del Norte on Tuesday, February 1 at home in mighty Mt. Olympus. Del Norte is a physical team and their style of play had the Titans rattled through the first half including forcing Blakeley Reynolds from the game temporarily with a possible broken nose.

The Titans were frustrated and gathered their wits for a better second half but it was too late to do any damage as Del Norte rolled to a 52-17 win. Hayes Freeman had a season high nine points in the loss.

“We struggled with how aggressive that team was,” says coach Amanda Reynolds. “We eventually adjusted and got used to it but, at that point, the game was out of reach.”

The Titans returned to Mt. Olympus the very next day to host the Lake City Fourteeners and were able to wash away the sting of the loss from the previous night with a 43-25 win.

The Fourteeners hung in the game down just five points at halftime led by one player in particular but the Titans adjusted accordingly and pulled away in the second half for the decisive win.

“We put Blake on their top scorer in the second half and she only scored two points,” says Amanda. “We were able to play the entire squad which was fun.”

The Titans returned to the road later that week as they headed to Sanford to face the Indians on Friday, February 4 knowing it would be a tough game.

“They’re in a league of their own and could be a state contender,” says Amanda.

Crested Butte did what they could, and then some, against the overpowering Sanford squad and while Sanford has been racking up 60-plus points against most opponents, Crested Butte held them to 49 in the 49-11 loss.

“We did a good job playing defense and made it hard for them to score,” says Amanda.

The rollercoaster week for the Titans girls concluded Saturday on a high note as Crested Butte battled its way to a 30-29 win over Trinidad.

Crested Butte came out hot on offense scoring 21 points in the first half and then gritted their way through the second half with tough defense and tremendous rebounding from Mara Pennie to hold on for the win.

“Last year we didn’t win the close ones,” says Amanda. “I was really impressed with their composure in the second half. It was a fun game to win.”

Blakeley led all scorers with 16 points while Pickering dropped in eight.

The Titans have another busy week with games against Center, Gunnison and Monte Vista.

“We’re starting to generate points across the team,” says Amanda. “We just need to put two halves together on the offensive and defensive side of things.”