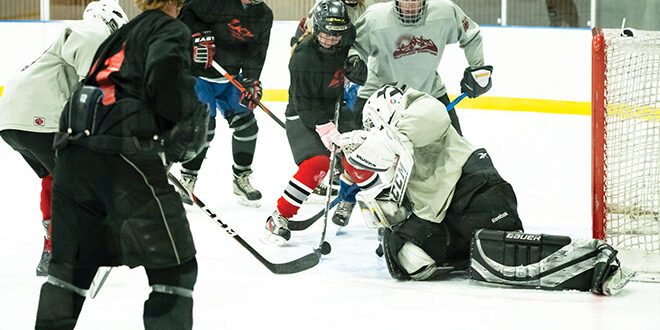 Hold onto your hats, or skates in this case, sports fans, synchronized skating is making a push for the 2026 Winter Olympic Games in Italy.

But until then, we’ve got not-so-synchronized skating every Tuesday, Wednesday and Thursday evening at Big Mine Ice Arena in the form of town league hockey and last Thursday night Lacy’s Construction skated to a 6-3 win over Altitude Painting.

Lacy’s went to work immediately in the opening minutes of the first period peppering the Altitude net with attitude but veteran goalie and team captain Shawn Harrington was up to the task initially turning away several early shots. But with pressure comes opportunity and with opportunity comes goals and after being held off for the initial five minutes, Lacy’s eventually cracked the seal on Harrington’s net as Jess Howard followed on a shot by Sam Kay “with a K” to score. A minute later Mitch Bever found the back of someone’s skate from behind the net to find the back of the net for a 2-0 Lacy’s lead.

Yet before Lacy’s could run away with the game so early in the night, Altitude Painting fired back. Danny Stoneberg slipped just inside the blue line to fire a low wrist shot through traffic to pick the low corner toward the end of the first period. Then, in the second minute of the second period Stoneberg struck again as he slowly but surely skated his way through almost the entire Lacy’s team to score and tie the game 2-2. Jake Sunter came up big on defense for Altitude Painting laying out to block a shot and everything seemed copacetic on the ice for Altitude Painting before Kay stepped up the pace.

Kay broke the tie as he carried the puck straight to net from the wing to stuff it near the post and then the Bever brothers connected for a fourth Lacy’s goal. The effort of Mark Goldberg drew a Lacy’s penalty setting Altitude Painting up with a powerplay but Hunter Donleavey turned away the shots and Bever scored for Lacy’s at the end of the second period for a 5-2 Lacy’s lead.

Lacy’s then turned to their neutral ice play and defense to maintain their lead. Collin Vossen’s effort in the neutral zone and Carter Brock’s work to shut down a two-on-one Altitude Painting attack continued to fluster Altitude’s efforts and then Bever scored again for a 6-2 lead midway through the third.

Altitude Painting did score one last time when Stoneberg and his hockey doppelganger connected for a goal and the team came close again as Carlee Drobnick was on the doorstep with the puck until Donleavey swept it away.