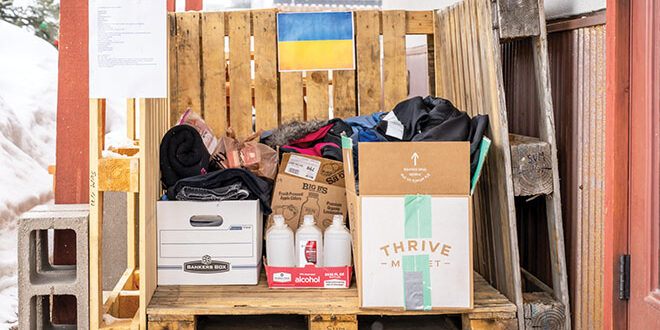 Crested Butte residents, like so many others across the country and the globe, have been following the news of Russian invasions on Ukraine in the past two weeks with sadness and often a feeling of helplessness. However, CB local Anna Rubina, who was born in Ukraine, has found a way to channel that frustration into a productive effort by organizing with two Front-Range based non-profit organizations this weekend to get supplies to Ukraine. Donations are being taken at Tully’s in CB South and Western Colorado University (WCU) in Gunnison. The supply truck will leave Crested Butte on Saturday, and Rubina says donations and a spirit of solidarity with her home country have been incredible.

Rubina has been in the Gunnison Valley for 12 years. She attended WCU, graduating in 2013, and now works as an accountant with a local firm in the Town of Crested Butte. But she was born in Kherson, the first Ukrainian city to have fallen to Russian forces, and has deep roots there. Rubina’s father and his family are from Ukraine, and her mother and her mother’s family are from Belarus and Russia.  “We are all a part of Eastern Europe,” she says.

Rubina immigrated to the U.S. with her parents and her paternal grandparents when she was just two years old, and her family established a new life in Denver. “My grandpa’s sister came over as a refugee during the Cold War, and later sent an invitation to our family to come over and join her,” says Rubina of the process. “My grandma had hidden from Nazis, and they had taken everything. She was in Ukraine during World War II. So when the time came she helped gather the funds and make it happen for us to come here. My mother was reluctant to leave, with so many relatives still in Belarus,” she says.

Rubina recounts growing up in Denver, where her parents made it a priority to keep in touch with their Ukrainian and Russian heritage through folk dancing, speaking Russian and even studying Russian mathematics while also embracing the U.S. and integrating into American culture.

”There are a lot of Russian speakers, Ukrainian speakers, Polish speakers in our Denver community,” she says. She remains connected to many of her friends from growing up, and speaks Russian with her family at home. “My dad speaks Ukrainian, and my grandparents speak both,” she says. Although she has never been back to Ukraine, her parents have made their own trips to the region and stay in touch with family.

“So this is very close to my heart,” she says.

Her grandmother and her parents remain in Denver. “My grandmother is very proud of her country. She turns 93 this month, and I am almost glad she isn’t able to follow what is going on,” says Rubina of her grandmother’s Alzheimer’s diagnosis.

“My parents are both pretty torn up about what is happening,” says Rubina. She says her aunt in Belarus still listens to the Russian news. “That’s another thing that is so hard is people forming their opinions based on misinformation,” she says. She has a cousin there that she does send news stories to, and who is reading a wider variety of news sources.

“I know we have our issues here in America but our enjoyment of a free press is something I feel incredibly thankful for. For me, it’s a war and it’s hard to see my country and my people suffering like this,” she says of Ukraine’s plight. She notes that she knows a lot of Russians who “don’t want this.”

Rubina says her mother encouraged her to do something to contribute to helping Ukraine when she was feeling despair. “I was just watching the news everyday and crying and feeling super helpless. My mom was the one to say ‘you can’t be so down on it when everyone in the Ukraine is being so brave.’ I think I needed to channel some of that sadness into something.“

So Rubina reached out to two non-profit organizations, The Polish Club of Colorado and the Ukrainians of Colorado. The Polish Club of Colorado is collecting personal and medical supplies, and the Ukrainians of Colorado is more focused on medical supplies. Rubina established locations in the north and south ends of the valley to collect donations, and she and her boyfriend plan to drive it all down to Denver on Saturday in his truck. If necessary, she said they would also use his trailer.

If there is a good turnout of donations, she says, “I’d definitely love to keep this going or find other ways to fundraise.”

Rubina first posted her collection information last Friday using social media. She says she has had a lot of people reach out since then and a lot of support. “It’s been really great to see that people care and want to help,” she says, especially as she is an accountant in the midst of tax season.

“I really appreciate everyone’s support. This community is so awesome when it comes to rallying for a big cause. I have so much appreciation to be here in this valley and be surrounded by so many good people who want to help,” says Rubina.

Monetary donations can also be made via GoFundMe’s Ukrainian humanitarian fund that has raised $1.4 million so far, at https://gofund.me/2d6e2906

Marsha Thorson, who has friends in the Ukraine, also shared a link through the National Bank of Ukraine to support their armed forces. bank.gov.ua/en/news/all/natsionalniy-bank-vidkriv-spetsrahunok-dlya-zboru-koshtiv-na-potrebi-armiyi?fbclid=IwAR1n6gS2fN_YXjpXR70Sq9dAKindEjpyFCdZ0HVe3F3YnsFCZy_PlzEEoT4

Airbnb is also allowing people to continue “booking” rooms from Ukrainians who cannot actually host people but can use the donations to cover basic needs, and the company is providing housing to Ukrainian refugees through international volunteer hosts.