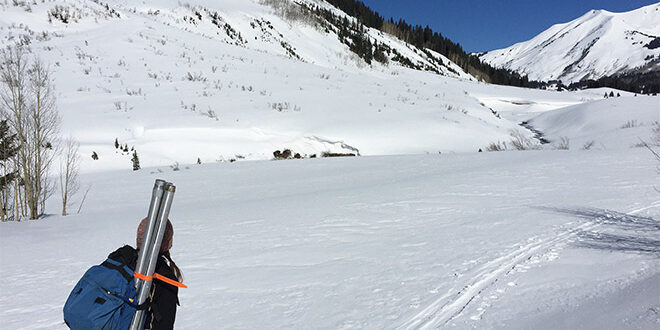 Major efforts are underway to monitor and measure the local snowpack which in turn could more efficiently manage the water produced from the winter snows that fall on the local mountains and valleys. Local scientists are involved in a broad program that could have impacts across the nation and the globe.

Four times this spring, local resident and Desert Research Institute scientist Rosemary Carroll will aid Rocky Mountain Biological Laboratory (RMBL) field scientists, Alex Newman and Curtis Beutler. They will perform ground surveys as airplanes use high resolution lasers to measure the depth of the snowpack and snowpack reflectivity, or albedo. They will dig snow pits for detailed measurements of snow depth, hardness and density. In addition, they will look at snow grain size and shape and note any dust layers. The data helps determine the accuracy of the measurements conducted by the air.

“These airborne data collection efforts provide a map of our snowpack at high-spatial resolution from the mountain tops to the valley bottom. When ASO (Airborne Snow Observatory) is combined with ground surveys and snow observations over time at our snow telemetry (SNOTEL) network, we can better track our snowpack and manage our water resources,” Carroll explained. “As climate changes, stream water forecasting models built on historical precedence, are not able to adequately predict stream runoff. The ASO methodology has been shown effective in California for improving stream water forecasting.

“We have used ASO in recent years in the East River basin for scientific research,” Carroll continued. “Scientific research has been funded by the Lawrence Berkeley National Laboratory, via the U.S. Department of Energy Office of Science, and the Colorado Water Control Board. Now Colorado sees an opportunity to incorporate ASO to understand snowpack in several basins across the state to better inform hydrologic models that predict streamflow.”

Carroll explained that ASO flies a fixed-wing aircraft across the basin using LiDAR (Light Detection and Ranging) with no snow, and then again with snow. The difference between the two data sets produces a snapshot in time of snow depth every three meters. ASO also uses a spectrometer to measure snow reflectivity. New snowfall has a very high reflectivity, while older snow or snow with dust has a lower reflectivity. Less reflective snowpack will melt more quickly than high reflective snowpack. The resulting ASO data helps to generate precise readings on the amount of water in the snow and guide estimates on where and when this snow may melt soonest. ASO not only quantifies total snow volume but also indicates where snow has moved across the landscape through things like avalanches and wind.

ASO-informed stream water forecasts have been shown to have accuracy rates of close to 98% or almost double traditional forecasts.

“ASO provides snow water equivalent (SWE) measurements across the entire basin, even at locations significantly above the SNOTEL network,” Carroll said. “SWE is a critical metric for understanding seasonal streamflow and managing water resources. The total amount of water at peak SWE (generally assumed at/near April 1) is not the whole picture. The timing and amount of snow loss is also important. Hence, multiple ASO flights help to understand snow accumulation and snowmelt across the basin.” Four ASO flights are planned this year. Two funded by Lawrence Berkeley National Laboratory and two by the State of Colorado. These flights will occur April through June.

Carroll emphasizes, “More accurate snowpack estimates allow us to better inform our hydrology models. Hydrologic forecast models can take the ASO data and update their snowfall estimates and this will greatly improve our predictions on streamflow.” Hydrologic forecast models are used for water management decisions that benefit both economies and the environment at the seasonal time scale, but also help longer-term planning.

As an example, she said ASO data collected in the East River can help irrigators and municipalities plan for the water year accordingly. In Taylor River, ASO can inform reservoir operations to better meet the needs of all its local users. Overall, the hope is ASO will benefit how Colorado manages water across the state for multiple uses and to meet downstream compact obligations. “Knowing where the snow accumulates and where/when it melts is critical to all these management decisions,” Carroll said.

Carroll is also managing a local stream discharge network so that there is high spatial and temporal data of streamflow across the smaller-order streams in the East River. She has stream gauges on Quigley, Rustlers, Rock and Copper Creek, to name a few. She currently manages 13 stream gauges. By measuring streamflow across the upper East River and in combination with the stream gauges maintained by the U.S. Geological Survey (USGS), she can monitor sub-watershed response to different snow conditions.

“My main scientific research objective is to better understand the source of streamflow in our mountains as a function of changing snowpack with emphasis on the groundwater component,” she explained. “The ASO data helps my hydrologic models better represent snowfall, and to implicitly have snowfall end up where it eventually melts. I am now expanding my domain to the entire East River down to the Almont stream gauge. The increased domain size allows me to evaluate across a larger range in geology, vegetation, and snow condition. My first questions are: how sensitive is East River streamflow to drought magnitude and duration in a warming climate? And where in the East River are the effects of drought most acute and why? The use of ASO to inform water input amount and timing at every location in the basin is fundamental to getting at these water resources questions.”

Carroll emphasized that mountain snowpack is a critical water resource globally and is also extremely sensitive to climate change. “The East River is emblematic of these mountain systems, and it has become the largest field observatory for integrated mountain hydroclimate and biogeochemical response,” she said. “Work between entities like the Department of Energy, NASA, NOAA, the USGS and others, and with help from RMBL, the research in the East River is critical to understanding how mountain systems store and release water and solutes. It is extremely exciting!”