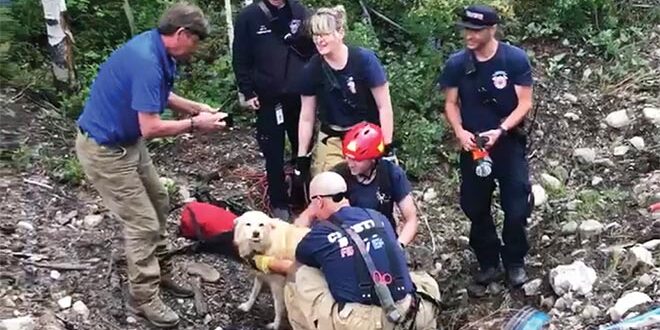 Liam the right size to fit in the culvert

Like more than a few local dogs, Goldie is curious. But her curiosity got the better of her last weekend when she ended up stuck in a culvert Sunday morning and local Crested Butte firefighters and Emergency Medical Technicians were summoned to the rescue. All ended well but not without some effort.

The adventure began when the eight-year-old dog, rescued from a kill shelter in Texas and thought to be a Golden Retriever/Border Collie mixed mutt, apparently followed her nose into a 100-foot culvert located near Grant Lake in Skyland. The culvert was 18-20 inches in diameter. According to Crested Butte Fire Protection District (CBFPD) fire and EMS chief Rob Weisbaum, “The owners discovered Goldie in the culvert and were unable to call her out. This prompted the 911 call on Sunday at 10:53 a.m.”

Goldie’s mom, Michelle Gerber, said she and her friend Rachel were on a walk and after a bit when they were away from the neighborhood houses, they let her off the leash so she could run. “She disappeared at the top of the hill and we didn’t see her after that. I started calling her and she usually comes,” Gerber explained. “We started to get worried and split up. Once Rachel was off the hillside, she could hear Goldie crying and called me to tell me where she was approximately. Once I was in that vicinity, I could hear her as well and looked in the culvert and could see the outline of her head. I went to the other side thinking I’d be able to reach her, but she was too far in!”

That’s when Gerber made the decision to not go in the culvert herself since she might get stuck, so she called 911.

The CBFPD crews arrived on scene and quickly identified how far in Goldie was and determined that she would not come out on her own accord. Weisbaum said that she was not physically stuck. The culvert itself was slick and it appeared Goldie couldn’t get the needed grip on her paws to work her way out. She entered from the downhill side and given her fear and lack of grip, she was unable to back up, nor could she head to the uphill side.

That’s when the five-person CBFPD rescue crew sprang into action. First, they sized up…their size. “At that point, it was decided that Firefighter/EMT Liam Reily would go into the culvert to retrieve her or force her out the other end. Why Liam? Because he is tall and slender with a good reach and volunteered to do so,” explained Weisbaum. “He was happy to go in. The crews tied a tag line to Liam’s ankle as he made entry so that they could pull them out. Liam snaked his way in. Both ends of the culvert were illuminated with hand lights.”

Once Liam had a hold of Goldie inside the culvert, Weisbaum said the rest of the rescue crew was able to pull both of them out of the tunnel. He said the rescue was pretty quick with the incident lasting just 20 minutes.

This isn’t the first time the CBFPD personnel have been called to action for such a situation. Weisbaum said a similar dog rescue was performed at another culvert a couple years ago. “If your dog decides to venture into a culvert, call 911 if they are not responsive to your commands and won’t exit,” advised Weisbaum. “While trying to retrieve your pet might seem like the best idea, allow us to perform those types of rescue as there are inherent risks to yourself such as getting stuck or dealing with poor visibility. We’re ready for all types of situations including this.”

Gerber said that while Goldie often looks inside culverts while out adventuring, this is the first (and hopefully last) time she has gotten stuck in one.