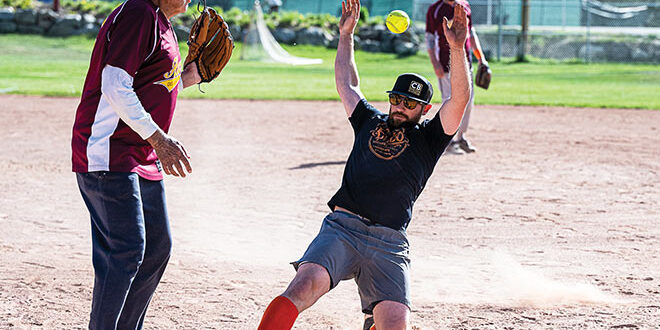 Than was in Spain. Or Turkey. Maybe France? Regardless, he pulled out a passport and boarded a flight in order to chaperone 20 high school soccer players through the rigors of international training camp.

The Hares faced off against the Eldo at Pitsker field on Tuesday, June 14. After eight contentious innings, which included allegations of hair splitting over questionable calls and a rumored fight in the outfield during the first minutes of the game, Hare player Gary Huresky knocked a sacrificial fly ball into center field to bring Kent Fulton across the plate for a 15-14 win.

It was a contest that went back and forth with the Hares holding an early lead, supported in part by strong fielding from shortstop Bryce W. Miller. Miller made one of the plays of the game in the top of the third when he took down a screaming line drive hit from the Eldo’s Pat Cashion, holding the younger team at 5-7 for the inning.

The tide shifted, however, in the fourth when the Eldo used a strategy that combined careful pitch selection, and a philosophy of “Don’t swing,” championed by Priscila Palhavã, with powerful hits. It began with a single from Joey Reed, followed by a walk for Ashley “Nance” Jackson. Andrew Arnold followed with a single of his own to load the bases. The momentum continued as Mark Cross hit a hard line drive toward left field bringing in two runners, and Robin Yost finished out the lineup for the inning, leaving the Eldo with its first lead of the game at 10-7.

By the bottom of the seventh, the Eldo was hanging onto a thin 10-9 lead. Tucker Brown of the Hares came to bat landing a strong hit taking him to second. Hare legend Don Bunnell was in the box next, and while Burnell said, “I will admit to being past my prime,” after striking out in the first, it didn’t stop him from taking a tidy single and advancing Brown to third. Kevin Vierling then singled again bringing Brown home, tying the score and sending the game to extra innings.

An aside, Crested Butte softball has some arcane rules, which if you spend your summer evenings chasing trout instead of balls you might not have been made aware until you’re at a game having missed the first inning due to the aforementioned trout, and suddenly it’s the top of the eighth inning, but there is already one out and a runner is standing on second even though a player has yet to bat.

Back to the game: Eldo player Cashion led the order, smashing an inside the park home run to bring the game up to 12-10. Robin Yost and Reed each put together a single, before Arnold knocked one toward center for a double and two more runs. Their part of the inning closed 14-10 Eldo.

The Hares started what would be the venerable team’s last at bat for the evening with Erin Stock on second. Reed pitching for the Hare’s loaded the bases with a few ill-timed balls, before the Hare’s consistent batting took over and Fulton was able to circle the bags, closing out the contest with the 15-14 win for the Hares.