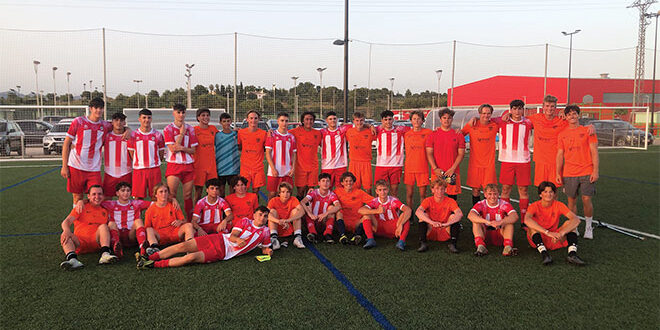 “You need to make it faster because you are boring me”

Week one was rough, but by week two of the Futedu Academy soccer camp, the West Elk Soccer Association players, aka the Titans, seemed to have adjusted to the schedule. Although several players never got the idea that when you order food delivery at 10 p.m., you don’t get to sleep until 11:30 p.m. making practice at 8 a.m. the following morning especially tough.

Nevertheless, the team was ready to build on what they learned following the drubbing they took at the hands of a couple of local clubs and another day off during the second week spent soaking in the Mediterranean Sea.

The coaches also took the opportunity to start demanding more from the Titans. While they maintained patience as the Titans struggled to adopt new concepts during the first week of workouts, they carried a slightly different tone during workouts week two.

The intro phase was over and it was time to start understanding and implementing the ideology of framework of the 4-3-3 formation as designed by one of our coaches for the Valencia FC pro development club.

The emphasis was on quicker, wide-open play with the ball and compact and supportive play without the ball. Nothing new for the Titans, but when packaged and presented with broken English and an insistence for perfection that is engrained in every football frenzied Spaniard, it was a bit abrupt.

Mario, our 24-year-old coach with an unbridled passion for coaching, started it off with this, “I’m going explain you.” And with that, playtime was over, it was time to meet, or at least appear to try to meet, the coaches’ expectations.

While the Titans did what they could to reach a new level, some efforts were still lacking and garnered such phrases from Mario like:

“You need to make it faster because you are boring me.”

“If you make too many security passes (i.e. possession passes) it is boring.”

But the Titans understood that they were capable of more and wanted to do what they could as they prepared for two more matches against a club from a neighboring town to close out the camp.

And, much like during the first week, the nightly celebrations at the resort and training grounds continued as a variety of groups would arrive every evening and celebrate late into the night culminating with a secondary school graduation celebration the night before match day. Complete with the successive rattle of carts moving glasses and plates and the nightly drop of trays full of beer bottles, glasses and plates.

Meanwhile, temperatures continued to climb throughout the week leaving the Titans to seek shelter and pass the time with card games in the shade or in their air-conditioned rooms. It was kind of like being inner-lodged due to excessive snow at Alta, but different. Temperatures eventually cracked the 100-degree mark on match day Friday, June 17. Fortunately, the games were scheduled to accommodate the rising temperatures and when the u16 team took to the field at 6 p.m. to face a u16 team from Atletico Vallbonense, temperatures had dropped to 94 degrees.

The first half was disappointing across the board as it was obvious the young team was still shell-shocked from their match a week earlier and fearing another drubbing. But they turned it around to play a much better game in the second half, including a goal from Avi Narayana, eventually falling 5-1.

The u18 team took the field shortly following and decided as a unit to make the most of their final match in Spain building a 2-0 lead on goals from Ben Barney and Jamis Matlock. Atletico Vallbonense cut into the lead, but Blue Gardner secured the 3-2 win with a goal to bring a great finish to the camp.

But the Titans’ effort was far from over and the players and coaches were challenged more than they ever had been at the camp as they embarked on a two-day cluster***k of travel starting Saturday, June 18 at 4 a.m.

A flight delay on their first flight out of Madrid sent the team into a whirlwind of re-bookings and hours upon hours in the Dulles Airport outside of Washington, D.C. including sleeping in cots Saturday night in a meeting room at the airport.

Once the re-booking mayhem was finished, anywhere from two to five Titans were re-booked on an array of flights out of Dulles bound for Denver and ultimately Gunnison Sunday evening.

Everything was back on track and looking good until the final flight at 4 p.m. out of Dulles was delayed. It turns out a mechanic pushed a button he shouldn’t have so all of the oxygen masks deployed pushing the flight back an hour.

As the clock turned to 7:28, four Titans could be seen sprinting through the terminal and were ushered onto the plane. But one Titan was stuck behind other passengers on the flight that landed leaving him, and a coach, stranded. The two opted to drive back to Crested Butte that night reaching Crested Butte Monday, June 20 at 3 a.m., 11 a.m. Spain time, making it a total of 54 hours of straight travel.

No Titan left behind.

Share
Previous The Hares battle the Eldo to go 15-14 in the eighth inning
Next CB restaurant roundup: summer dining has some changes