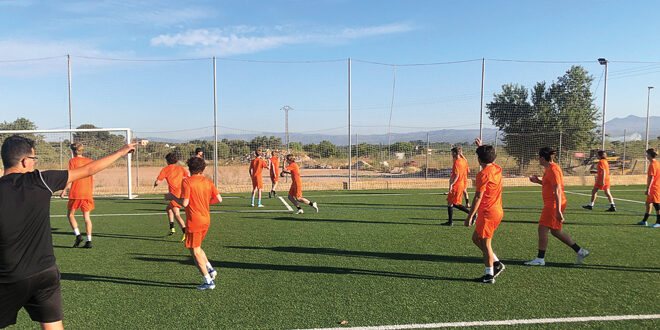 Now is the time!

Perhaps it was the magic of the Internet, i.e. Google algorithms, but a search for a soccer camp in Madrid by West Elk Soccer Association board president/soccer coach Ross Matlock led to a random email from Futedu Academy in Valencia, which then led to 25 Titans traveling from Gunnison, Colorado to Betera, Spain just outside of the coastal city of Valencia for two weeks of soccer, er fútbol, training and culture.

After 36 hours of travel, a suspicious meal and a bad night of sleep, the players were handed their “kits” consisting of orange shirt and shorts for training and sent out onto a turf field for their first session and they have been playing catch-up from the first minute.

The lessons are similar, but different. Fútbol is in their DNA here and what seems second nature to the players in Spain, and all over the world, takes time, lots and lots of time, for Americans to digest.

While the first meal had everyone concerned, it proved to be an anomaly as every meal since has been fine. Breakfast is at 7 or 8, lunch at 1 and then dinner is at 8 p.m. Though, the Titans have discovered that there are plenty of delivery food options in Betera to get their fix of Burger King, Telepizza and most anything else.

That said, the afternoon stretch between lunch and dinner appears to be the toughest for the Titans, and myself, as there is no fridge or cupboard full of snacks and cereal, no Mikey’s Pizza and certainly no True Value a stone’s throw away. We are at a training facility outside of the city and somewhat self-contained. It is also shared by other soccer academies that bring in players from Tunisia, Egypt, Russia, amongst other Americans and a pick-up game one evening was what Ross and I hoped for. Kids from Crested Butte playing the world’s most popular game with kids from other states, countries and continents. A high school girls’ basketball team from Iceland was here as well, but only for a short time minimizing any distractions from soccer the Titans might entertain.

And while it is a training facility, it appears to also play host to some sort of graduation, or birthday party or whatever people choose to celebrate every single night. Celebrations, no matter what age the people are, often don’t start until 10 p.m. and can include fireworks right outside our door at 1:30 a.m. enjoyed by grandparents aged 80 down to grandkids aged 8.

Still, the Titans must get up at 7:30 a.m. for breakfast and training, no matter what. Fortunately, coffee is aplenty here and while I thought I had a problem in Crested Butte, my mere survival day-in and day-out relies almost entirely on the constant accessibility of coffee.

The first week of camp was a mix of skill work and tactics with the main focus on individual and team defense. One of our coaches (entrenador), Mario, makes it very clear during small-sided drills when to push harder as he will shout, “Now is the time!” A phrase the Titans have adopted for everything.

“When can we do laundry?”

The first week concluded with games, er matches, against two teams, a u16 and a u18 team, from a local club in Betera. The temperatures were in the high 80s with plenty of humidity when we took to the turf field and we got thumped in both games. Suffice it to say, it is a level no Titan has ever seen before.

Some lessons were learned and at one point a Titan came off the field claiming his legs were numb because his socks were too tight and his feet were so hot. But our coaches Mario, Sergio and Miguel still gave everything they had when directing the Titans and spoke of pride, hard work and effort, no matter what the score. The Titans did whatever they could to maintain that mantra but there was only so much they could do.

Disappointed? Not so much, as we knew that playing the local teams would be tough and that if we could just take away a few things from the experience, it was well worth it.

We licked our wounds, returned to our rooms for another night of noise from another party but had the next day to tour Valencia, eat pizza, burgers and ice cream and learn some history.

Our tour guide broke it down easily for the Titans explaining Valencia was first inhabited by the Romans, then the Arabs and then the Catholics. The history of the local industry was simplified as well into three eras; agriculture, ceramics and then tourism. As the end of the silk road, Valencia had quite a heyday and you can tell by some of the buildings, especially the intricate stonework that borders entrances and windows on so many of the older buildings.

One thing is for sure, the bat is of the utmost importance to Valencia. There is a bat on the crest of both professional soccer clubs, Valencia and Levante, on every manhole and utility cover on sidewalks and streets to everywhere else. It has been explained to me why the bat is so important in three different ways but remains unclear to me. Either the bat woke up King James alerting him of an imminent attack by the Moors, or a bat saved the life of King James by stopping an arrow meant for him. Or it landed on his head as they attacked and conquered Valencia in 1238 and is therefore lucky. No matter what, respect the bat. But, as the heat bore down on the Titans during the walking tour, minds melted and less and less knowledge was retained. So now we are back to training.

Some video analysis of our matches illuminated numerous shortcomings in our game so we are back at work, improving in a couple of areas, will spend another day at the beach and then do more training as we prepare for two more matches on Friday, June 17 prior to our departure. Our only hope is that we improve upon our first effort.

Until then…“Now is the time!”