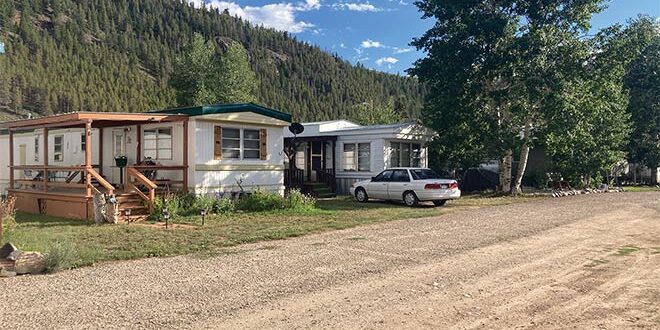 A relatively small and quiet mobile home park above the Three Rivers Resort in Almont will be undergoing some drastic changes in the next 12 months that will displace a dozen or more local residents. The park’s owners intend to increase rent by 57% in January and will change the use of one third of the property in September 2023 to accommodate water infrastructure replacements and other improvements, thereby removing 14 mobile home units from the park. Mark Schumacher, who has owned the park since 1983, says he has struggled with this decision and intends to negotiate compensation with those being displaced. Some residents who will be affected say they will likely have to leave the valley.

Three Rivers Resort Mobile Home Park houses roughly 60 people, according to Schumacher. There are 44 mobile homes, 11 of which Schumacher owns and uses to house his employees. Per Gunnison County regulations, he says the other units are limited to two residents apiece.

Schumacher notified tenants earlier this month that rent will increase on January 1, 2023 from $400 per month to $700, and he notified tenants in row one of the three-row park that their home sites will undergo a change of use and will no longer be rented effective September 1, 2023.

Schumacher cited recently passed Colorado House Bill 1287 titled “Protections for mobile home residents” which takes effect on October 1, 2022, as a primary reason for the notifications and changes. “The legislative climate in Colorado has unfortunately become very hostile to mobile home park owners,” wrote Schumacher in a letter to all tenants of the park on August 4. He stated that the new legislation promotes an acrimonious relationship between owners and residents, and he will now have a harder time managing the community and imposing or enforcing rules and regulations to maintain cleanliness and sustain people’s property values. “Many of you are not only residents, but friends, former employees, and other good acquaintances.”

As for rent increases, Schumacher has stated in public comment during Gunnison County commissioner meetings recently and stated again in his letter to all tenants that this is to be proactive in preparation for a potential rent control provision in the future. Governor Jared Polis vetoed that aspect of HB-1287 this spring, but Schumacher said he believes it is coming. “The rent increase is necessitated not only by the past few years of onerous and nonstop regulation, but by the shadow of threats that more is on the way,” he wrote. He noted that the current $400 monthly rent appears to be well below market value as well, based on other rentals in the area and RV parks averaging $1,840 per month (utilities included) within Gunnison County.

In a separate letter on August 3 to tenants of row one in the park, Schumacher informed residents they will lose their homesites next year. He described needed infrastructure changes to replace a water system and “other infrastructure needs and improvements that we intend to make using the affected area.” He cited legislative pressure as well. “We need to close a portion of the park to ensure we can operate the park in accordance with all of the new laws and regulations,” according to the letter. “The legislature has also changed the structure of our relationship in ways we did not foresee…when we created our rent rates. We thus have to provide this notice at this time, so we can avoid the unreasonable and substantial payment requirements the legislature is trying to impose on future closures and use changes.”

For example, Schumacher says nine of the 11 units in row one are not allowed to be moved anywhere in Gunnison County per Gunnison County Land Use Regulations. The Colorado legislature in 2008 passed regulations that restricted moving mobile homes built prior to 1976 (“pre-HUD”), and Gunnison County did not repeal that regulation. Schumacher and his sons, who became partners in Three Rivers Resort this year, own one such mobile home in row one.  “This property right was taken away from these owners with no notice. Units cannot even be moved within the same park,” he said.

A meeting was held on August 7 to discuss the changes with current tenants, and many of them are now trying to figure out where to go and if they can stay in the Gunnison Valley. Several attendees reported that Schumacher offered to pay them each $7,500 for the loss of their homesite, and there appear to be mixed feelings of understanding Schumacher’s position and of skepticism about his intentions for the first row that will be vacated of all mobile homes next year, and offer impressive mountain views.

Thornton Reese is one of the tenants in row one and says that while he is actually ready to move on from the Gunnison Valley anyway, he worries about many of the other tenants.

Reese has been in the area for over 10 years, having worked at Western Colorado University and retired about three years ago. He says the community is pleasant, and Schumacher has been a discerning landlord who keeps the area nice. “There are a lot of older folks who come for summer,” he says of the seasonal residents.

He says he isn’t surprised by the notice, although he was unaware of Schumacher having discussed his plans for the water system and rent increase for several weeks. “This is definitely a business decision on his part and he’s a good businessperson,” says Reese of his landlord.

Schumacher confirms that of 44 residents who are not his employees, eight are out-of-state retirees who use their units only in summer. “The other 25 residents are a mixture of workers and local retirees,” he says.

There is no clear plan for what will be done with the vacated row after the infrastructure work is complete, but those currently residing there appear to have no option but to find other housing and give up their mobile homes.

Some of the tenants were present in the park on Monday afternoon, August 8 after the previous day’s meeting. Several declined to comment to the Crested Butte News, and others commented but wished to remain anonymous.

James Krause, or “JD” has lived in the valley for around 20 years and works in property maintenance and snow removal. He purchased a mobile home unit in the front row of the Three Rivers Resort Park two years ago after having rented various places in Crested Butte South, Ohio Creek and the Almont Resort. He says his purchase price was $10,000 for his mobile home and he put another $10,000-$15,000 into it, thinking he was investing in a long-term home. “I put in a new bathroom, a new furnace, I redid the laundry room and bedroom and I was getting ready to put on a new roof,” says JD. He says there was never discussion of plans that would uproot the first row of homes until they received the notices this month.

JD says $7,500, which Schumacher offered verbally at the meeting but has not yet put in writing, “would hardly even cover my moving expenses.” He points out that there is no new lot to move into, “even if we can move units. And $7,500 is not a fair buyout when units have sold within six months for over $70,000.”

Schumacher says HB-1287, which Gunnison County commissioner Liz Smith testified in support of, would cost Three Rivers an estimated $1,285,500 to vacate all units in row one, between appraisal price and disposal costs.

JD says that the compensation offer only applies to tenants who vacate by May 1, 2023, and after that time residents would receive no compensation. Schumacher says he is working on the legal details but intends to negotiate with all of the displaced owners. “Some [are] being paid more than what they purchased the home for [and] some less depending on the condition and timing of sale transaction,” he said. Schumacher will also pay to dispose of any mobile homes that cannot be moved.

Commissioner Smith says that the role that Gunnison County commissioners played in supporting the legislation was advocating for stronger tenant rights around the sales of mobile home parks, such as right of first refusal, and measures to protect tenants when the Department of Local Affairs cited mobile home park owners for violations of health and safety for their tenants. “We did not weigh in formally on rent stabilization or compensation. I find it very unfortunate that Mark and I did not have this conversation earlier in the process of this legislation. There were many other mobile home park owners involved,” she said. She also noted that rent compensation was not part of the bill that the governor signed.

“It’s a nuanced and difficult topic. I’m sympathetic to the challenges Mark is facing, and some people will remain good actors and some will exploit the chance to work around new regulations. The narrative that is being used here does not strike me as particularly fair though,” she said. “As I understand it there are ways to correct the infrastructure without moving the homes. In conversations we have had with Mark he observed that there would be displacement at some point in time. From my perspective there is a way to put in infrastructure in a different way without displacing people. These are business choices that people make—and you can’t have it both ways where you are working in your own best interests and trying to work around regulations looking out for the best interests of others.”

Like Reese and many others, JD described the park as a pleasant living situation where people generally mind their own business, take care of their places and look out for one another. “It’s pretty peaceful and quiet and we enjoy our view,” he says. Most of his work is at Trapper’s/Wildcat outside of Crested Butte, and he says moving down valley would be cost prohibitive due to the expense of gas and running his truck over the mileage. “After being passed around so many times my best option at this point is probably not in this valley,” he concluded.

Share
Previous Profile: Rick Horn
Next Some things I don’t quite understand…