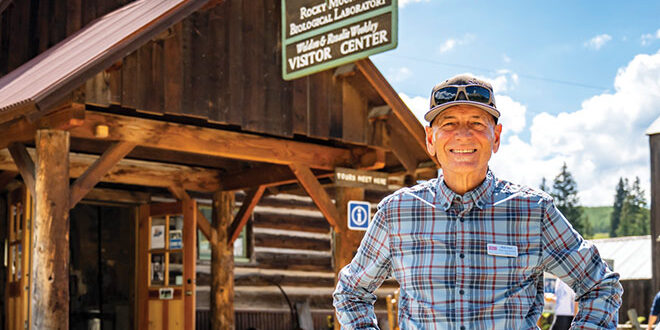 If you find yourself traveling up the meandering dirt road leading to Gothic and decide to stop in that tiny camp town full of research scientists and marmots, you might be greeted by Rick Horn, the manager at the Rocky Mountain Biological Lab (RMBL aka “Rumble”) Visitor Center. Rick, who was once titled information technician, is now the center’s manager and has spent nine summers at the base of the spired mountain. As info tech, he’d give talks about RMBL’s history and research. After his first summer there in 2014, he was asked to be manager. “I love the organization for so many reasons,” he says and notes that the tourist traffic into the visitor center has increased exponentially since he first started. “We’ve gone from about 10,000 visitors during the summer season to about 20,000. There’s certainly more people coming from other parts of the country who have found their way to Gothic,” he explains.

Growing up in Des Moines, Iowa, Rick touts that’s he’s a real Midwestern kid but quickly adds, “We love having grown up there, we just don’t want to live there as adults.” He also had the ideal American family life. “My father was a World War II vet and mom was a part-time librarian. We grew up in an Ozzie and Harriet household. I was a hardcore baby boomer.”

Even though he was in a big city, Rick was very outdoors oriented. He’d often spend time with his grandparents who lived in small towns in Iowa and got him outdoors. “One grandfather was a farmer, the other hunted and fished every day and I was influenced by both.”

In his Midwestern school, Rick recalls that team sports ranked as most important for everyone. “I was too small, so I wasn’t going to make any of the teams, but I had a talent for writing and journalism.” He became editor for his school paper. “I really liked journalism and if you were the editor, you could have your own column on the front page.” Rick was part of the generation who was profoundly affected by the assassinations of President JFK, Martin Luther King and Robert Kennedy, the latter who died on his commencement day. There were 800 graduates in his class of 1968.

Rick was a good student but laughs that he wasn’t the greatest. However, he knew he was going to college because the Vietnam War was raging and the draft was in full effect and boys could get a student deferment. “My sophomore year in high school was when they had the first draft and my number was 80, and up to number 150 were going to Vietnam.”

Rick enrolled at the University of Iowa, where there was a small ski club of about 30 people and as a freshman in 1969, took his first trip out to Colorado, spending five days at five different resorts. “I took a half-day lesson from a college-aged girl with a great tan and I loved everything about the experience – the fresh air, the beauty of the mountains, the snow, that beautiful blue sky. It was before the Eisenhower Tunnel was built so you drove over Berthoud Pass. It was just a life changing experience for me.” After that, during spring or Christmas break, “Whoever had a car that would run, we’d road trip to Colorado, usually Steamboat, Aspen and Vail where a lift ticket was only $6.50. So, for a couple hundred dollars, a college kid could go skiing in Colorado.”

On May 4, 1970, four Kent State University students were shot dead and nine others injured by the Ohio National Guard for protesting the war. All hell broke loose across the country, and it was yet another life changing event for Rick and his generation. “Every campus exploded with riots and demonstrations. The school was shut down right after and they wanted us to leave campus and go home. It became really personal because now there were college students being murdered on their campus and it radicalized all of us. It was very personal,” he says of the shootings, “because a lot of us were going to be drafted.”

Rick received his degree in business in 1972. It was a mere two weeks after graduation when Uncle Sam called up his number for the draft and Rick received his papers. He was determined not to get drafted and fortunately, he was rejected because he had grown up with asthma. “I was ready to go to Canada. I was not going to be the last person killed in Vietnam,” he affirms, as the war was declared over in 1974. “I put my dog, skis and road bike in my car, and I moved to Steamboat in the fall of ‘72.”

With no affordable housing, Rick moved into a trailer park 11 miles west of Steamboat, essentially living in a closet and working as a diver at the Holiday Inn. He didn’t even make it to ski season there because of his housing situation.

After a trip up north to see if there were any other desirable small town ski resorts in Montana or Wyoming, he headed to the newly opened Snowbird and moved to Salt Lake City where he felt confident that he could find work and housing, and eventually wound up in Sandy, Utah. “I spent four years waiting on tables at night and had a ski pass at Alta and Snowbird. It was an exciting time. I didn’t know how to ski that well, but I met a few friends who helped me learn. I just sort of followed them around,” he laughs. “We had over 600 inches the first two years I was there.”

Living the dream ski bum life was fine but Rick decided to return to the Midwest to seek a real career in 1976. “I thought I’d have better luck finding a job back in Iowa than in Salt Lake City, because of the Mormon influence, since you might not be hired if you weren’t a Mormon.”

After a short, unfinished stint at Drake University in Des Moines, Rick had an opportunity to help open a restaurant in Minneapolis, which moved him into the Twin Cities. “I liked it because there was snow, better skiing and bike riding, it was better in a lot of ways.” He spent the next 22 years there entirely in the restaurant industry.

In 1984, after managing various restaurants, he was hired by a small company of restaurants called Applebee’s, he grins, and tells that there were only nine restaurants in the newly started franchise. Over the 15 years he was with them, he built out about 20 Applebee’s in various locations, including Washington state, and saw the company grow from nine restaurants to over 1,000. He eventually moved from the franchise side to the company side of business as VP of operations as well as VP of concept development.

With his background and now years of experience, Rick was snatched up by an Italian restaurant company in 1999. “They were expanding to Naples and Fort Myers, Florida, and they needed a guy who had grown a restaurant company before.” He traveled for work from Minnesota to Florida to open those new restaurants but after spending way too much time on planes, phones and in hotels for two years, he and his wife felt a change was needed. “My wife was tired of being a lawyer,” he tells of his spouse, Susan Holappa, who he met through Applebee’s where she was a lawyer. They married in 1989.

The couple had been spending their vacations in the West and one night after dinner and wine in Grand Junction they decided to make the leap. “We were returning from a Lake Powell trip, and we decided to sell the house and move to Grand Junction. We weren’t sure we wanted to live year-round in the snow and Moab is an hour and a half from GJ. I thought GJ looked like an undiscovered gem.” They bought a home there in 2001. Rick did some restaurant consulting but three years later, anxious to hit the slopes with a pass, he applied to be a CBMR ski instructor. To his utter surprise, they hired him. Rick and Susan bought a tiny studio condo at Skyland Lodge, splitting their time between CB and GJ since his wife still had her law practice on the Western Slope.

With his management skills, CBMR moved Rick into ski school supervisor his second year there. The following year, he was promoted to Adult Ski School manager. Unfortunately, two years later, CBMR hired a new ski school director who fired everyone and Rick returned to being an instructor with no salary or health benefits. But he continued to teach skiing in the winter until 2014 when he went to work as an information specialist up at Gothic. “I love being part of the RMBL team. I felt so fortunate to find a home like I’ve found at RMBL. I’m older than billy barr by one week,” he laughs, “so I’m the eldest there. I have a wonderful staff who come back to work every year at the visitor’s center. We keep growing each year and I’m thrilled that I’m making a contribution there.”

As with most Buttians, what he’s enamored with the most about this valley is, “The people who live here, the environment, the beauty. Just like the first time I ever went skiing, the beauty is overwhelming. I love the size of the town, going to the post office, grocery or having a beer on Elk Avenue and seeing people I know. There’s no place I feel better and no place else I’d rather be.”