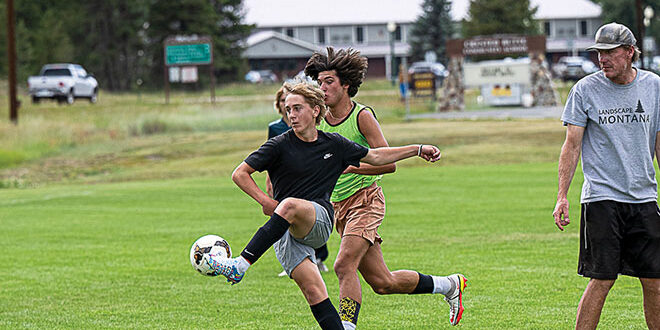 “Hopefully they learned their skills are still a little tarnished and they need to be polished, and how important it is to work together”

The Crested Butte Titans boys soccer team heads into the 2022 season with even larger targets on their chest after winning their second 2A title in a row last year and what they do about that is entirely up to them. One thing is for sure, it’s not going to be easy.

For starters, they lost a couple of key ingredients to their recipe for success with several players graduating. Furthermore, the 2A class continues to grow and looks to be even tougher this year as three major 3A schools have dropped into 2A looking for a taste of the title.

Crested Butte does have a few things working in the favor, at least on paper, as they have a massive senior class this year and, from the looks of preseason workouts, several of them appear ready for the challenge.

“In my humble opinion, I see some kids in better shape than I thought they would be,” says coach Bob Piccaro. “The team is excited as a whole and I’m not hearing any moaning.”

That said, the focus of preseason workouts remains the same as it has always been when the Titans prepare for a season.

“Our focus is conditioning and defense,” says Piccaro.

But there is a little bit of a twist this year as Crested Butte looks to make some changes to their strategy on the field and the players are working through the new system slowly.

“It’s looking okay,” says Piccaro. “They’re still getting the rust off with their touches as they’re learning a new system.”

Their new plan got its first test last weekend as the Titans headed to Grand Junction for a couple of scrimmages against non-league teams and found there’s plenty more work to be done.

“The scrimmages were great because they learned there’s bigger fish in the sea and just because they won a couple of titles doesn’t mean anything,” says Piccaro. “Hopefully they learned their skills are still a little tarnished and they need to be polished, and how important it is to work together.”

The mantra of teamwork rests heavily on the senior class and Piccaro has seen mostly positive things from the upperclassmen, yet he also sees that the entire class needs to buy in to the team’s effort.

“The energy is great,” says Piccaro. “Their attitudes are starting to move in a more positive way too. I think they’re starting to realize how many seniors there are and that they all need to fight for playing time.”

Piccaro does point out that there are some underclassmen showing they’re ready for some varsity time as well and that with such a strong class of freshmen, there’s also some eyes on the future of the team.

“We have a couple of kids that are looking ready to step in,” says Piccaro. “We also want to make sure the freshmen are ready to step up. We’re working to increase their game where they can be an asset to the program next year.”

As for expectations, Piccaro expects to see more of the same from the past couple of years knowing full well that the Titans are the team everyone wants to take down.

“It’s our expectation to continue to do well in 2A soccer but, the more you win, the bigger the target,” says Piccaro. “It’s hard to repeat, but it’s even harder to three-peat.”

The Titans kick off the 2022 season at home this weekend as they host the Basalt Longhorns at Rainbow field on Friday, August 19 at 6 p.m. They return to Rainbow on Saturday, August 20 to face the Alamosa Mean Moose at 10 a.m.