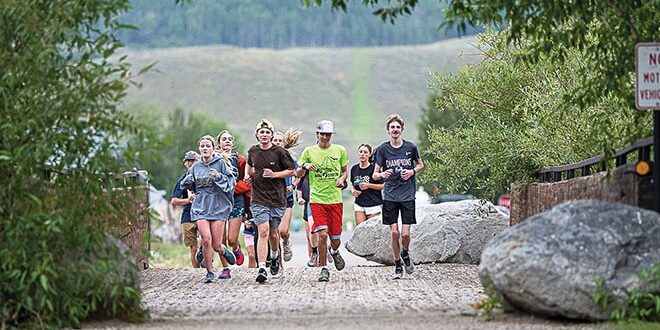 “It’s one of our biggest rosters in a while”

Last season the Crested Butte Titans cross-country team had 15 runners out and despite losing a handful of them to graduation, numbers remain strong as they head into the 2022 season.

Preseason workouts started on Monday, August 8 and athletes continue to trickle in for practices. By the start of the second week of preseason efforts, coach Shari Sullivan-Marshall and her assistants Laura Puckett-Daniels and Vince Rogers are looking at seven girls and 11 boys lacing up their shoes for the season.

“Our numbers are looking great,” says Sullivan-Marshall. “It’s one our biggest rosters in a while and that makes it fun for everyone.”

Ruby Pendy is the lone senior this year and looks to continue her success on the cross-country circuit having placed 10th at the state championships last year. The Titans team has four juniors as well and Sullivan-Marshall points out all five are ready to step up their games in the upcoming season.

“This is the third year of cross-country for all of our upperclassmen,” says Sullivan-Marshall. “They’re all stronger and they can all handle more volume now.”

There are three sophomores out with the biggest surge in numbers this season coming from the freshmen.

“We have 10 freshmen and that’s exciting,” says Sullivan-Marshall. “The middle school program creates a really positive environment and we’re starting to see the benefit of the bigger classes coming into the high school.”

The mix of experience and youth does make for varied workouts depending on the athlete, but the three coaches are committed to instilling a team energy during the preseason.

“A huge focus of these first weeks is team building,” says Sullivan-Marshall. “We make sure the entire team runs together at the start of the practice and then we start to differentiate.”

And while some may be ahead of others in their fitness and development as a high school runner, the coaches are also committed to pacing all of their athletes through the start of the season.

“We’re not rushing into things because we have so many new runners and we want everyone to have a really strong base before they run their first five-kilometer race,” says Sullivan-Marshall. “We want to make sure everyone is feeling good and prepared for that first race.”

As a result, the Titans will continue workouts until the second week of September when they head to Grand Junction for their first race on September 10.