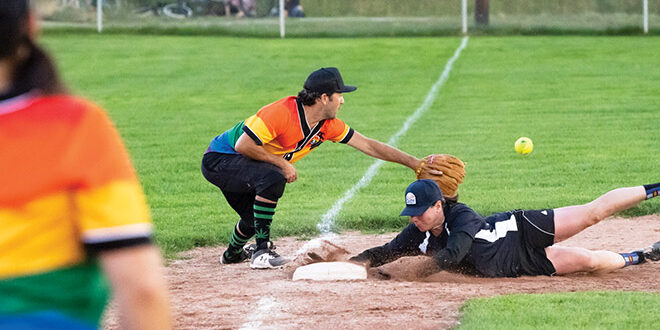 It was one of those games where you wished both teams could have won. And given the trends in sports, at least at the youth level where everyone gets a ribbon, my guess is there are some who believe both teams are winners. But, alas, you can’t have two winners, and that’s more than okay. I just wish someone would explain that to the IOC.

The Rent-A-Gades and Rainbow Unicorns battled through all seven innings before the Rent-A-Gades finally emerged victorious to advance to the Wednesday league finals. Which, by the time you’re reading this, has already happened.

The Rainbow Unicorns came into the game fresh off a revenge win over CB Extreme earlier that evening and were feeling it from head to toe in their rainbow uniforms. One player in particular was feeling it for sure, and not necessarily in a good way. According to my bleacher sources, Krystal Ramsey’s finger was bent back so abruptly that it tore the skin apart. She finished that first game but had to go get it stitched back together during the second game.

The Unicorns continued “Corn Time!” into the first inning of their second game of the night to take a 5-1 lead thanks to the work of Adam Westlake, Heather Culley and Ashley Hues to load the bases and Rob Houston to clear them with a crusher of a grand slam home run proving that the ol’ Airhead may be a little grayer, but he’s still got that smooth swing. Robbie Vandervoort, Kari Roberts and Chris Rocky Durante then connected for a series of base hits to score one more and the Unicorns were up 5-1.

Corn Time! continued into the second inning as they held the ice-cold Rent-A-Gades hitless in the top of the inning and then tacked on nine more runs in the bottom of the second inning. The top of the order did their jobs again as Westlake, Culley, Alex Mattes-Ritz all got one base and the rest of the batting order did their jobs to start generating runs. Hues started it off with a sac fly RBI, Houston and Miller Hales pushed two more across, Vandervoort and company scored two more with base hits and Rachel Brodsky, Westlake and Culley capped it all off to knock in three more runs for a 14-1 Unicorns’ lead.

And while the Rent-A-Gades have struggled under the spotlight before and appeared to be doing it again, there was plenty of softball left and they used every bit of it to mount a slow and steady comeback. Thanks in large part to the energy of Jesse Smith.

The Rent-A-Gades were looking a bit down and out at the top of the third inning, but not Smith. Smith stepped to the plate to lead off by slapping a double to the opposite field and then wheeled home on a squib grounder by the next batter. Base hits from Cody Hawkins and Montana Wiggins then set up Peace Wheeler and Mark Krause for RBI base hits and while still down 10 runs, something eerie was afoot.

Houston continued doing what he does for the Unicorns as he slapped a triple and scored but the Rent-A-Gades kept on plugging away.

Jake Ellis cracked a double to deep left center and scored off a hit from Krystal Staggs. Kate Schmidt then flared an opposite field single and Smith struck again to push a Rent-A-Gade home with a double up the middle cutting the Unicorn lead down to nine runs.

Then their defense stepped up. Just as the Unicorns looked to regain some of the earlier magic, the Rent-A-Gades defense turned a double play from third base to first base to stop them in their Unicorn tracks.

Lauren Alkire then got things going for the Rent-A-Gades in the top of the fifth with a lead off single and then stretching and sliding for third on a single by Krause. Emily Ocanas then scored Alkire with a double down the third base line, Ellis stroked a RBI double and Staggs scored Ellis with a double to cut the Unicorn lead down to five.

Houston completed the cycle with a double and the Unicorns added one more run on a RBI base hit from Hales but Hawkins and Wiggins tacked on two more Rent-A-Gades runs in the top of the sixth inning and they surged one last time in the top of the seventh to finally take the lead they’d been working so hard for all game long.

Krause kicked it off with a solo shot, Ellis followed with a two-run home run to tie up, Jeff Snyder and Schmidt combined for base hits to put the Rent-A-Gades up 17-16 and then Smith struck again with a two-run inside the park home run for a 19-16 lead heading into the bottom of the seventh inning.

Houston wasn’t done though and when Hues walked to lead off the bottom of the seventh, Houston stepped up to crush a two-run home run looking to save the game for the Unicorns, but the magic had run dry and the Rent-A-Gades sealed the 19-18 comeback win to advance to the finals to face the Pitas OGs.

You may, or may not, recall a couple of weeks ago a young woman on a team asked if I ever put humor in my articles and then proceeded to tell me that I should.

Well… this time a kid, I’m guessing age seven or eight, said to me, “I expect a good article, that was a good game.”

Being a nice guy and knowing that oftentimes a child is still figuring things out I responded, “I’ll do my best.”

To which he responded, “You better.”

“I believe the children are the future,

Teach them well and let them lead the way.”

How about we start with teaching them some manners.