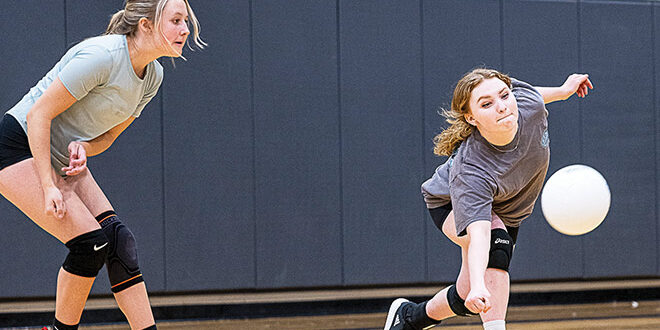 The Covey sisters are back

After a long hiatus, sisters Marla and Sheri Covey are back coaching the Crested Butte Titans volleyball team.

“We’re back in the mix,” says Marla. ”What we missed most about coaching was knowing the kids and knowing that part of the community.”

Both coached the Titans volleyball team with Marla stepping away in 2015. After slipping back into the fray of coaching volleyball at the club level last year, they saw the opportunity to then move back into the high school program this year and wanted to help bring the program out of the tough COVID years.

“We think the kids suffered during the COVID years, it was tough to have cohesive teams,” explains Marla. “They couldn’t have team meetings, team dinners or really do much to help build team dynamics.”

Marla touts the effort of the coaches that had to work through those years to keep the program going, especially last year.

“They had a lot of injuries and Cierra had to do pretty much everything by herself and that’s hard,” says Marla.

Marla and Sheri have 22 players out this season led by five seniors with one junior, five sophomores and the rest freshmen.

“Twenty-two is a really good number to have,” says Marla. “God bless the middle school coaches.”

Their first order of business during preseason workouts is two-fold. First, they want to rebuild the team dynamic and team cohesion that suffered during the COVID seasons. They’re also getting everyone back up to speed and see some players have done some work on the off-season while others gained experience last year as they were asked to fill in spots for injured players before they may have been ready for varsity play.

“Some are coming in with some pretty good experience already,” says Marla. “And some of the younger kids attended camps over the summer. A lot of players are still just holding on right now but a lot of them are picking things up quickly. Repetition is the key.”

The Titans are getting thrown straight into the fire this year as they will play half of their scheduled games by Labor Day weekend.

“We’re trying to jam in a half of a season’s worth of knowledge into the first couple of weeks,” says Marla. “We’re keeping it simple though. Just keep getting the ball over. At the high school level, oftentimes the least mistakes wins.”

They kick things off this weekend as Crested Butte is hosting a tournament in mighty Mt. Olympus on Saturday, August 20 with the Titans scheduled to start things off at 9 a.m. with two more matches after that.

“We get some games in before we head into league which is huge,” says Marla. “We’re hoping this weekend will get our varsity some good experience.”

Ultimately though, Marla and Sheri really just want to build momentum this year, and in the years to come, for the Titans volleyball program.

“We’re trying to call on some former players to come in and coach and spread the love of the game,” says Marla. “If we grow the level and being part of a team, we hope that will then grow the program.”

The Titans will then host perennial league powerhouse Sanford on Tuesday, August 23.