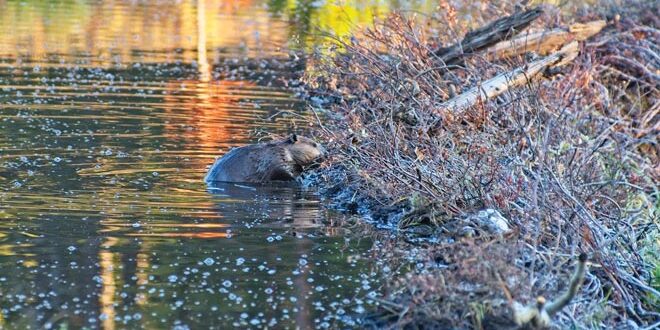 “If I asked you to draw a picture of a stream, you would probably draw this,” says wetlands ecologist Mark Beardsley, as he gestures at a meandering mountain stream behind him known as Trail Creek, high up in the Taylor Park area west of Taylor Reservoir. “But that’s not the natural condition of many of these big headwater mountain systems. A stream is still water moving down a hill, but the way it’s moving is different at this site than the one we’re moving to next.”

Trail Creek is a tributary to the Taylor River, and once there were active beavers living within it and creating water pockets that housed vast riparian life. Now there are increasing sagebrush pockets along the stream banks and the root systems of dried up willows are exposed along former water lines.

But the beavers are coming back—or at least being invited to.

Beardsley, whose company EcoMEtrics has been working with a low-technology, process-based restoration (LTPBR) technique in the area with local land management partners and numerous Gunnison County stakeholders, has been imitating beavers along Trail Creek since 2021. The result is a section downstream of where he stood during a recent field tour that has successfully rewetted more than 30 acres of historic wetlands.

On Tuesday, September 13, the U.S. Forest Service, the National Forest Foundation (NFF) and American Rivers hosted a field visit to the Trail Creek site of the Taylor Park Wetland Restoration Project, with almost 40 people in attendance including various stakeholders and funding partners.  Representatives from the Coca Cola Corporation, one of the project’s funders, travelled from across the U.S to see the human-powered operation happening in an unassuming corner of Taylor Park.

“We are here today to see that this is such a showcase of how to do it right and all the benefits that are going to flow from it,” said Dayle Funka, Grand Mesa Uncompahgre and Gunnison (GMUG) National Forest district ranger during an introduction.

EcoMetrics, members of the Gunnison County Sustainable Tourism and Outdoor Recreation (STOR) Corps and volunteers started building makeshift beaver dams, called beaver dam analogues (BDAs), last fall out of sticks and mud. They installed about 20 simple structures in total as the first phase of the project, and when they returned in the spring of 2022, they discovered their work had attracted a real beaver couple from nearby.

That was exactly the hope. The second phase of the project began this summer and the group has built another 200 BDAs even as the beavers have industriously built up a previously abandoned beaver lodge about four feet taller just upstream of the ongoing restoration work. If this low-tech approach attracts more beavers, their population in the area could potentially sustain and restore an increasing expanse of wetlands into the future without ever using any heavy machinery. But for now, the wetlands across Gunnison County are in decline.

Beardsley estimates that beaver populations have been decimated from western lands to between 2% and 10% of their former population about 200 years ago. The idea is to help them return in their naturally preferred density, albeit only to the places where they can coexist with humans rather than acting as nuisances to ranchers, residential developments and municipal infrastructure. As he speaks, numerous OHVs, dirt bikes and other motorized vehicles cruise by on the adjacent dirt Forest Service Road. The intent is not to fully restore the landscape as it once was, but perhaps to repair the worst of the damage done while adding resiliency.

Beardsley explains that a healthy stream should meander through a valley but in a naturally occurring state, it would have various beaver dams helping the land around it slow the flow of the water travelling downstream and expand outward into a floodplain.

Ashley Hom, a hydrologist with the GMUG stands beside Beardsley, describing how she has learned to see the streambed ideally acting as more of a sponge than a straw. “The same amount of water still moves downstream, but in the process it floods the area around it.” This helps carry nutrients downstream as well, which continue to benefit wildlife and ensure higher water quality for ranching and recreation.

“In Gunnison we have less than 2% of the entire landscape as a wetland,” said Hom. She described how wetlands support much of our ecosystems, and an estimated 80-90% of all wildlife species rely on wetlands at some point in their lives.

“And Gunnison County happens to be a little under the Colorado state average. We have a little less wetland than most of the rest of Colorado public lands,” said Hom. “The wetlands are decreasing, and that I didn’t understand until I started coming to sites like this.

“One of the things we heard a lot from our ranching community, our downstream water users, from hunters and fishers is there’s less wildlife lately,” continued Hom.  “There’s less grass than we used to have, people say there’s less water in these streams.” She conceded that drought has played a role, but said the other important role at play is that “beavers haven’t been in this system in 20 years.”

Hom cited aerial imagery showing that beavers were in the area about 20 years ago, and before that their presence was “blinking on and off.” In the 1700s and 1800s beavers were largely trapped and killed for the European fur trade but prior to that, “There were beavers in pretty much every single drainage in North America,” said Hom.

Hom described that what is happening across the Taylor River Watershed is streams getting lower and transitioning from healthy wetland willows into sagebrush.

“The cool thing is we’re on public lands,” said Hom. “We get to manage these and potentially manage them back to a historic state,” when there were healthy ecosystems largely driven by beavers. She described having reached out to EcoMetrics two years ago asking where restorative work might happen in the area.

The beaver imitating techniques aim to improve local landscape resilience to drought, flood and wildfire, but the project has also become somewhat of a demo project catching the interest of others across the west.

“It’s inherently not flashy,” says Gunnison County STOR Corps coordinator and NFF program manager Joe Lavorini of the project. “But this is now being done across the country.” And it may occur in other areas of Gunnison County as well, if funding continues.

“This is the biggest turnout I’ve seen on any of our restoration projects,” marveled Beardsley. He conjured a common perception of beavers as a nuisance species. “What’s happening in the last five years is mind-blowing in my world,” he said. “There are people coming from all over to look at wetlands and to be excited about beavers.” 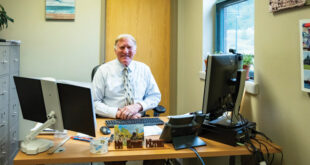 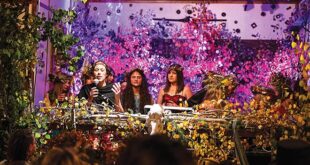 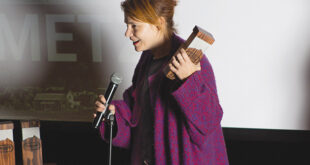