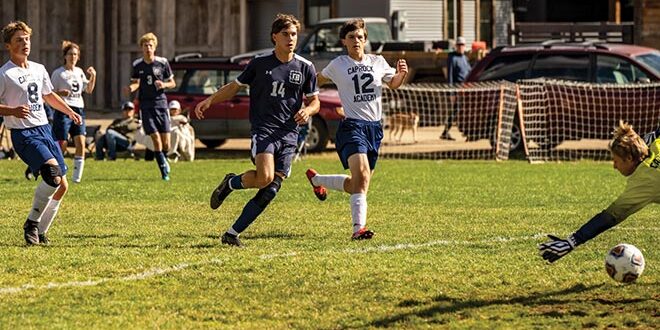 It’s been an interesting, and at times frustrating, season for the Crested Butte Titans boys soccer team with a number of games resulting in easy wins. Such was the case last week when the Titans hosted league opponent Caprock Academy on Tuesday, October 4.

The Titans cruised to a 10-0 win against Caprock earlier in the season but after a solid past two weeks of play, coach Bob Piccaro wanted to keep the team moving at full throttle.

“We want to stay focused with their eye on the end prize, no steps backwards,” says Piccaro. “We had to keep working on the things we’d been working on as well as give some players who don’t quite yet understand what we’re doing a chance to keep working on it.”

While it took Crested Butte 20 minutes to score two goals against Caprock in their first meeting, the Titans rattled off five goals in the first 10 minutes of this game including two goals from both Jamis Matlock and Jacob Bernholtz. By the 25th minute the Titans were up 7-0 and Piccaro had to start adjusting things to keep the game in check before the mercy rule would be enforced.

Avi Narayana joined in the scoring, netting two goals and Kai Greene slipped in the Titans’ ninth goal in the 34th minute.

“We subbed out the starters earlier than we usually do and tried just passing around more and working on possession,” says Piccaro.

Ben Barney finished it off in the 36th minute of the game scoring the Titans’ 10th goal and the game was called at halftime.

They have a long stretch before their next game including a week without workouts before they get back together on Monday, October 17 as they prepare for their final two games of the regular season against league opponents Ridgway and Telluride. They host Ridgway on Thursday, October 20 and then close things out on Saturday, October 22 in Telluride.

“We’re going to see where they are at when we get back on Monday,” says Piccaro. “They’ll probably take one step back during the break, it is what it is. We’ll have a couple of intense practices to get them back in tune and we play Ridgway at home which will help. The good news is we should have everyone back in action so we will have subs to play and the hope is we will be at full strength when we play Telluride.”