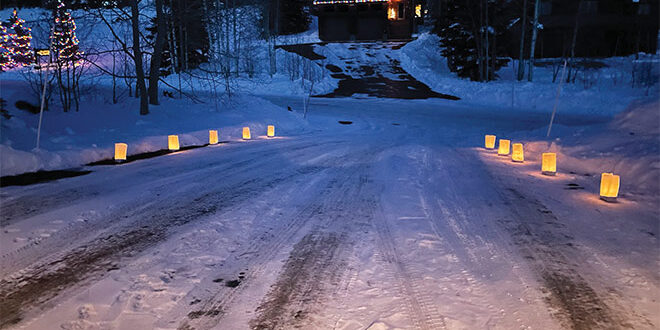 “Magic happens when they are lit…”

During the darkest days of the year, every bit of light can help raise spirits. For the third straight year, the Gunnison Valley’s Resiliency Project will help bring more light to the valley by offering inexpensive luminarias to be lit on the upcoming Solstice. In the process, the hope is to use that light to strengthen connections and deepen community while benefitting two worthy non-profits: Crested Butte State of Mind and the Gunnison Arts Center.

Ginny Baylor of the Resiliency Project said three years ago more than 7,500 luminarias were distributed throughout Crested Butte, Gunnison and all points in between. That was in the heat of the pandemic, and it was a way to bring people together in a difficult period. Last year more than 5,000 were handed out and the goal is to replicate or surpass that number this year.

Now, she says, it’s not about the pandemic, but the goal is broader. “It is another way to build connection with a shared message of “giving light” to one another,” she explains. “Physically giving a luminaria to a friend or neighbor, or sharing in the magical light that each luminaria gives off when lit.”

During the first year in 2020, the luminaria kits came with the bags, candles and some sand to anchor the bags. Baylor says dealing with more than 8,000 pounds of sand was a bit of a nightmare (it sounds like volunteers are still recovering from the sand process) and so it was excluded last year and in 2022 it will be sandless as well. Still, the hope is to get out as many luminarias to as many people up and down the valley as possible since the beauty of the glowing lights is not just physical, but emotional.

“The feedback has always been remarkable,” Baylor says. “People share stories of how the luminarias spark great childhood memories or bring joy when seeing them lit on a cold dark winter night. Last year myself and another Resiliency Project member spent an afternoon at the Four-Way in a snowstorm to distribute them and left with warm hearts because the community came out to pick up their luminarias, shared stories, paid it forward to others, donated to the cause and spread joy to us and others in the three hours we were out there. Similar stories can be said of other distribution days and deliveries….and that is just handing them out. Magic happens when they are lit and again our community connects. Our valley looks forward to this event and their purchase is made with the idea to share with one another.”

Baylor says since the Resiliency Project was not really set up to handle the distribution of thousands of luminarias, they have enlisted the help of the two non-profits at each end of the valley and the hope is that they can provide a broader reach and can perhaps use the event as a fundraiser.

“Because the Resiliency Project is small and operates on a very small (read zero) budget, we felt we could enlist the help of other valley partners who shared in our vision of this project and could benefit from the distribution of the luminarias,” Baylor explains. “We didn’t want to hand over the project, but we did think that some money could be made from the sale of luminarias. The Resiliency Project was just trying to break even in the purchase/sale of the luminarias and when folks would graciously donate $20 “to the cause” we didn’t really have a place to allocate those funds. We know that CB State of Mind and the GAC will benefit from the sale of luminarias, and it helps us get them in even more hands! These groups also have a wider reach in promotion than we could ever dream of. We felt the valley would benefit more if we could include these partners in the distribution and marketing.”

There is no need to pre-order the luminarias. Baylor says CB State of Mind has arranged to have them for sale at the CB/Mt. CB Chamber of Commerce during business hours from December 10-21 if folks cannot grab them during their scheduled pick-up times. The Gunnison Arts Center has the same set up at their building at any time for the first part of December.

The official scheduled pick-up time in Gunnison is for December 2 at the Gunnison Arts Center between 5-7 p.m. In Crested Butte, the official pick-up times include three days, December 10, 13 and 15. On the 10th, you can purchase them from 5:30-7 p.m. in Mountaineer Square during the Chamber’s Light-Up Night event in Mt. CB. On December 13 they will be available at the Crested Butte Four-Way Stop from 8:30 a.m. to 10 a.m. and on the 15th from 3:30-6 p.m., also at the Four-Way.

The cost is $1 per luminaria.

The idea is for the community as a whole to light them on the Solstice, December 21, from 6-8 p.m. “In Gunnison for example, we will be lighting the walkway in front of the schools from the high school to the new library,” Baylor says. “We also plan to have a huge heart in the GHS field.”

“We hope that seeing the glowing luminarias will spark a sense of belonging and joy in those that see them,” concludes Baylor.