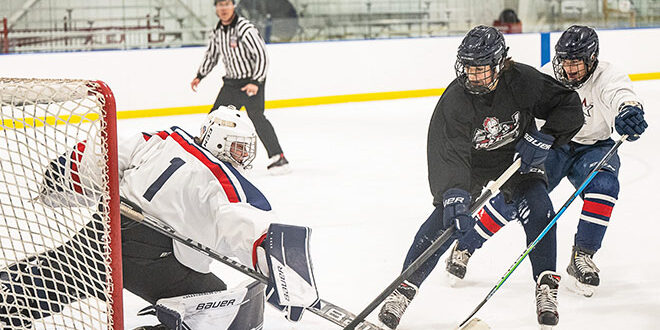 “We just want to get 1% better each day”

Every fall, several Titans hockey players get started as part of the West Elk Hockey Association under Titans assistant coaches Matt Prudhomme and Shane McGuinness and over the years, the energy for fall hockey continues to build.

“It was a really good turnout,” says head coach Billy Watson. “A lot did the fall league season and improved a ton.”

Once the team got together for high school preseason workouts, they’ve been hitting it hard training both off the ice and on the ice with early morning sessions coupled with additional evening practices. And the buy-in has been great with as many as 30 players committed to the program for the upcoming season.

The team this year is led by nine seniors, all of whom were on the team when the Titans fell in the 4A state final game in 2021.

“This senior class is pretty fired up, they saw us lose that state final,” says Watson.

Sam Dukeman, Brendan Hartigan, Duke Sloan and goalie Jack Perkins were selected as captains to lead the team and Watson sees leadership coming from several other players on the squad as they build cohesion through the early stages of the season. Watson also has a host of juniors, sophomores and freshmen that could contribute as the season continues.

“We’ve got a core group of players and they’re all leaders,” says Watson. “And we’ll have guys rotating in and battling every week for a spot.”

Given the experience of the senior class and the effort of the players during the fall season, the team appeared to be strong heading into the Thanksgiving week.

“We were already working in systems before Thanksgiving and feeling ahead of the game this year,” says Watson.

They open play with their first game at home on December 2 and Watson is keeping season expectations somewhat muted while still providing the players motivation as they head into the season. In a rebuilding year last year with numerous injuries, the Titans still made it to the second round of the state tournament and look to build on that growth from last year in the 2023 season.

“We’ve left out expectations, sort of,” says Watson. “We still push them because we know what they’re capable of but it’s still early. This group should make a good run, but we take it game by game and see how things work out. We just want to get 1% better each day.”