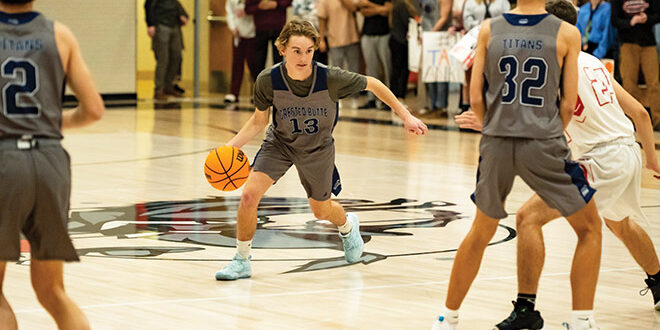 “There was a self-belief that grew during that game”

While the Crested Butte Titans boys basketball team was noticeably unsettled against Gunnison and out of whack for the first half of their game against Center, they recovered just in time to finish the two-game stretch on a massive high note.

The Titans started out against the Gunnison Cowboys on Tuesday, January 17 getting points from four different players as Kasen Cox, Jamis Matlock, Riley Davis and Ben Barney all scored but the Cowboys were at a different pace to build a 15-7 lead by the end of the first quarter.

The Titans’ shooting woes continued in the third quarter while the Cowboys got hot and tacked on more points with their transition game. They closed the third quarter with another buzzer beater to take a 46-34 lead into the fourth and eventually finished off the Titans 60-45.

“We definitely missed shots we can and should make but Gunnison did a good job defensively,” says coach Hannes Gehring. “The good thing is we were getting open looks. We’re still learning the nerves of it all.”

In the end, Gehring chalked the loss up to pace and fitness.

“The difference in the game was transition,” says Gehring. “They probably scored 16 points, maybe more, off transition. We’re just not in game shape and we should be.”

One plus side to the Gunnison game was the Titans’ press. The coaches tweaked their press leading up to the Gunnison game and while it proved still a work in progress against the Cowboys, the press came around in the nick of time for them in their game against Center on Thursday, January 19.

Crested Butte had, what appeared to be, a noticeable advantage over the Center Vikings when they took the floor but struggled early on to fall behind 13-6 in the first quarter. The Titans’ offense did catch fire to score 16 points in the second quarter, but the Vikings continued to outplay Crested Butte and took a 33-24 lead into halftime.

“I genuinely thought we were the better team and to be down double digits was surprising,” says Gehring. “We challenged the boys at halftime and they owned it and came out in the third quarter with a completely different energy.”

Crested Butte turned to their press in the second half and as the half wore on, the Vikings wore down under the pressure. Center held onto a 48-40 lead by the end of the third quarter, but the Titans continued to pour it on and exploded in the fourth quarter.

“We were still down but the way we were playing was night and day compared to the first half,” says Gehring. “Restructuring our press was more fruitful than I thought it would be.”

As the Titans continued to press, they continued to gain additional momentum with two three-pointers coming from Porter Donohue to fuel the rally. A steal and basket by Cox tied the game 55-55 with two minutes left to play. Davis followed that with an offensive board and basket and Barney then followed that with another offensive board and kicked it out to Matlock for a three-pointer and the Titans were up 60-55 and went on to close out the 62-58 win. Barney led the Titans with 16 points, Miller scored 12 and Cox, Matlock and Davis each added in 10 points.

“There was a self-belief that grew during that game,” says Gehring. “There were a number of times we could have given up, but we didn’t. That was the biggest team win to date, everyone contributed.”

Crested Butte heads to Sargent on Friday, January 27 and then returns home to host Trinidad on Saturday, January 28. Tip off for the boys varsity game is scheduled for 2 p.m.