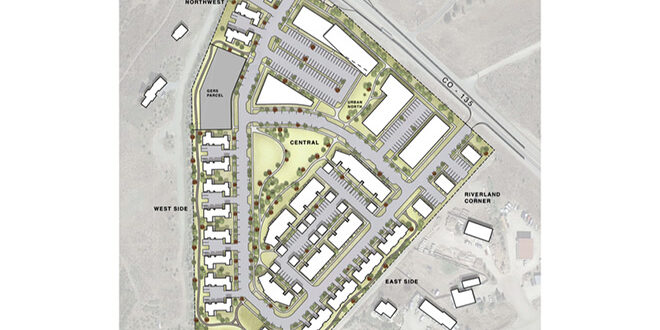 Gunnison County’s major housing project proposal at Whetstone cleared another hurdle last week as a joint public hearing proved conclusive enough for the Gunnison County Planning Commission to prepare for sketch plan approval. The hearing for the Whetstone Community Housing project on January 19 was moderately attended and included discourse and commentary on a range of topics varying from full support, suggestions for design changes, considerations for neighboring properties and concerns for the large buildings placed on the site plan closest to Highway 135. After considering all comments, the planning commission agreed unanimously to continue the public hearing to their next meeting on February 2, and to consider an approval of the sketch plan at that time.

The Whetstone proposal includes a general site plan for up to 231 units, ranging from one to three bedrooms, on the county’s 13-acre parcel located on Highway 135 between Crested Butte and Riverland Industrial Park. The proposal aims to meet the workforce and affordable housing needs in the community.

The full planning commission, including alternates, was in attendance alongside county commissioners. Recently seated commission member Annie Beall recused herself due to “perceived participation in community outreach” related to the project.

The project team reviewed their proposal and the Land Use Resolution (LUR) major impact application process. John Cattles, Gunnison County assistant manager for sustainability and operations, noted the “balance of sometimes conflicting solutions to problems,” and reviewed how the team had attempted to achieve that balance while addressing the housing needs in the North Valley.

Willa Williford, an affordable housing consultant on the project team, described a ‘catch up and keep up’ concept. “This is not even anticipating any future growth; this is just trying to get to an even place,” she said.

The commission then opened the meeting to public comment. Some comments opposed specific elements or possible impacts, however no one opposed the project entirely.

Tod Colvin spoke first. As owner of the Creekside subdivision to the northwest of the parcel, Colvin expressed support of the project. He asked for continued consideration in the future, which would include changing the access to his property due to a planned roundabout on Highway 135. He said the project team and his family are working on an access agreement, and on preserving the trees and berms that separate his property from the project.

Terry Colvin said the project is literally in their front yard, and she applauded the project team efforts and said they generally support it but hope the project will consider access; honor boundaries and discourage trespassing. She added that they would prefer not to be annexed into the town of Crested Butte.

Steve Schechter offered some input as a long-time former general contractor for passive solar designs. “I’m concerned about all the garages facing south in your sketch plan,” he said, acknowledging that the layout might necessitate it. He encouraged as much passive solar as possible, and advised that they plan to expand, shelter and heat the electric charging station areas as the electric car industry grows, noting that electric cars don’t charge well when cold. He also advised not to put evergreens on the south side of the property, because “They shade in winter instead of summer…and yet I see that everywhere.”

Loren Ahonen reiterated his enthusiasm for the project to keep locals around. He said living very close to the Paintbrush affordable housing project in Gunnison has been a positive experience.

“I say yes in my backyard, and I ask that all my neighbors in the north say yes in their backyard,” Ahonen commented.

Anton Sinkewich, the community development director for the city of Gunnison also spoke in support of the project, as did Cass Rea, Lisa Lenander and Craig Geipel.

Geipel, who owns Alpenglow Rentals, a seasonal jeep rental business, said he feels the need for a large and high-quality housing project. He said many second homeowners are complaining about losing views or slight value to their homes, but they also complain that there are not enough service workers and maintenance or tradespeople.

“We need people that live here,” he said. “We lose so many talented and hardworking people. I have shed tears over watching people leave our community who don’t work for me, who don’t benefit me, but they benefit others.”

Geipel did speak out in disagreement with the planned roundabout. “They might look nice on the map, but we need a community that functions,” he concluded.

Lindsey Freeburn said she knows firsthand how stressful housing insecurity can be, having lived in 10 houses within the past 10 years. She spoke in favor of density as fostering community and connection. “We absolutely need density somewhere in our valley to support our workforce,” she said.

Jennifer Hartman from Sunlit Architecture asked about utility infrastructure and possible annexation by the town of Crested Butte.

George Gibson asked the project team to consider alternatives that swap the larger buildings at the site entrance for less conspicuous ones currently toward the back.

“We have allowed a small team to urbanize Crested Butte,” Gibson said, and asserted that narrow traffic ideas are dictating poor design.

John Murphy said he was concerned about his commercial property line in Riverland Industrial Park being about 20 feet from where residential buildings are planned. He said his large equipment and delivery trucks sometimes kick up dust and he wanted to know about possible barriers and night lighting issues.

Murphy also spoke on behalf of Riverland Industrial Park as a resident and wanted to know if tying the industrial park into water and sewer utilities would be a consideration for the project. Last, Murphy said it is already getting harder and more dangerous to turn left on 135.

Nan Lumb said she supports the project but took issue with the two buildings close to the highway. “Buildings this massive will diminish the rural feel and agricultural character in the North Valley and set a precedent to urbanize the gateway to Crested Butte,” she said. She quoted a core value stated in the LUR “to protect the heritage of our rural character,” and again quoted the LUR language stating that “large, obtrusive structures adjacent to 135 should be avoided.”

Lumb concluded that the right design could accomplish larger buildings while protecting an iconic viewshed.

Andy Kadlec, executive director of GVRHA spoke in support of the project and said the diverse housing types were key for a feeling of community, diversity and protection against economic downturns.

Steve Ferris, a community planner and manager, said as a second homeowner in Skyland, “We love this project in a lot of ways…our concern is the proximity of the large buildings to the highway.”

Ferris said he felt the engineers were driving this design by trying to make the highway right. He suggested they focus on making the project right instead and move the three-story buildings back 100 yards from the highway.

Jim Starr said he thinks Whetstone is the biggest advancement he has seen in his 35 years as a former CB town council member and former county commissioner. He spoke on behalf of the board of the Valley Housing Fund in support of the project and encouraged swift action to move forward.

John O’Neal said as someone who has grown up in the valley, he sees the community threatened by an imbalance of who lives here. He said part of the problem is affordable land, and while the location and design are not perfect, they will work and be a great place to live. “I think the size of this will be one of the greatest aspects of the project,” he added.

Cathie Pagano, Gunnison County assistant manager for community and economic development, answered some of the questions that had come up. She explained that CB would have to decide on connecting utilities to Riverland if the utility extension was settled. “That’s not something that we have control over,” she summarized, which is also true of the town’s decision on annexation.

Cattles said they intend to provide electric vehicle charging and a pathway to expanding it. Project architect jv DeSousa addressed the tall building locations. “We have done studies that looked at the center… we were trying to work with the grades that exist and maintain open space where people can access it. That requires parking,” he said.

Cattles then showed a design version where the tallest buildings had been placed to the east and demonstrated how it affected the exit to Highway 135, which did not allow for enough room to comply with CDOT regulations and further congested traffic flow within and around the site.

Pagano said an upcoming county corridor plan would provide more guidelines and clearer direction for future growth. While essential housing projects are exempt from some of the LUR regulations regarding visibility and size, she said that view corridors and open space are clearly valued.

“Density is the antidote to sprawl,” she said. “And that must occur near towns.”

As they closed the public comment portion of the meeting, county commissioner chairperson Jonathan Houck spoke in appreciation of the civil discourse that had occurred.

Planning commission chairperson Andy Sovick then addressed the commission and county commissioners about their overall feeling of the plan and process thus far. He reflected that there has been a lot of public comment; that most if not all comments supported the project and the location; and that most also supported the entire plan.

Planning commission member Fred Niederer said his biggest takeaway was that there is some concern about the aesthetics in the location of the larger buildings. He said in his experience as a commercial subcontractor, density creates about 30% more savings. He cautioned that the heights, density and details of the buildings are being driven by many things, and he said he has seen many well intended projects get caught up in minutiae and fall apart due to the resulting cost increases.

Planning commissioner Matt Schwartz said that he wasn’t concerned about building heights from the highway line of sight.

“And I also know that this is sketch plan,” he said. “I’m really comfortable with the process we’ve had, and I feel like we should continue to move forward.”

Commissioner Liz Smith asked for more information about project exceptions in the LUR based on being essential housing.

Gunnison County attorney Matthew Hoyt gave a thorough explanation of the legal workings of the modification exceptions for essential housing projects.  Hoyt said that must be determined at this stage, and once granted it cannot be rescinded.

“You must [allow modifications] if it makes a better design, energy efficiency or creates amenities giving a better quality of life,” explained Hoyt. “Unless it affects public health, safety or welfare.” He added that the commission should consider if the application is generally consistent with the LUR requirements for those modifications, and that specifics are not considered at this stage.

County commissioner Laura Puckett Daniels pointed out that there were very specific concerns about very specific details, which could change in preliminary plan.

“That’s really what sketch plan is supposed to be about…to provide guidance to the applicant that they are either on the right path to final approval, or that they need to in preliminary plan provide the burden of proof that they are entitled to the modification,” said Hoyt.

Houck felt the project was generally consistent to county rules and regulations. “I am happy with where we’re at with sketch plan,” he said.

Sovick asked the commission if they were ready to proceed with a recommendation. All members indicated that they were. Planning commission member Julie Baca made a motion to continue the hearing until the next meeting, and to direct staff to prepare a recommendation of proceeding with sketch plan approval. The motion passed unanimously. The planning commission will review the approval document and possible conditions for approval on February 2 at 9 a.m., potentially moving the project into preliminary phase.