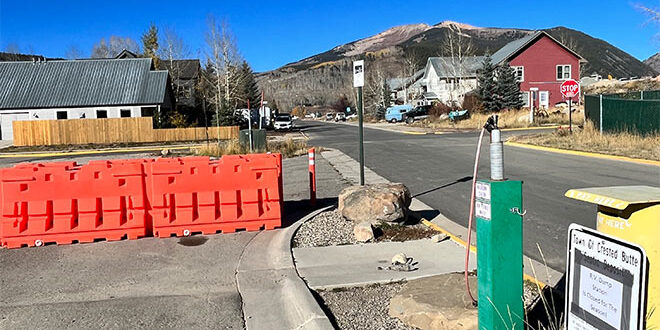 Important to continue looking for other alternatives

The Crested Butte RV Dump Station will be open next summer in its current location. The town council agreed to keep open the only such facility in the North Valley but also spend up to $90,000 to make it less impactful to the neighborhood. They made clear that if the dump can be relocated as part of the proposed Whetstone affordable housing project if town ends up supplying water and sewer services to the development, that would be ideal.

The issue has been a controversial one for years as neighbors have complained about the increase in traffic and speed from recreational vehicles heading to the RV Dump Station through the neighborhood. During COVID, the traffic was especially high and idling RVs also impacted the neighborhood. A two-year attempt to find another viable location ended without any alternative.

During the last official vote on whether to keep the station open or close it, three councilmembers voted to keep it open while two voted against it and two others were away from the meeting. Under the town charter, it takes four votes to take such action so the issue came back when six councilmembers were present on January 3.

In a relatively short public discussion, teacher Dave White detailed the reasons to keep it open. He said that while on a year-long family RV trip he witnessed numerous instances where fellow campers dumped waste in the backcountry or rivers if no facilities were easily available. “I have to say that telling people who camp up here to go to Gunnison to get rid of their waste is the most entitled attitude and serves up the animosity between the two ends of the valley. I hear the irritation while teaching in Gunnison,” he said. “And I get it. It’s a NIMBY (Not In My Back Yard) idea. We are stewards of these forests and rivers so there is a responsibility. Moving it is fine but shutting it down before a viable option is found is ludicrous. Shutting it down will have impactful ripple effects. It’s there and we need it. The people in the neighborhood knew what they signed up for.”

No one spoke against keeping it open at this meeting although there has been stiff resistance from neighbors in the past.

Councilmember Jason MacMillan said he had come around to the same conclusion as White. “I am now in favor of keeping it open,” he said. “When (former) Gunnison mayor Jim Gelwicks offered the Gunnison RV Dump Station as an alternative, I was open to that. But I’ve since heard how making people drive there will have impacts and also waste a lot of gas. Plus, I am listening to all our partners like the county and CB South and the STOR (Sustainable Tourism and Outdoor Recreation) committee, and their concerns matter as well. We are in this place where we all need to work together. As to the concern about traffic, no matter where you live in town, we all have our cross to bear, whether it is traffic to the school or traffic going to Peanut Lake Road. Having said all that, I do think that finding a better spot is important.”

“I too am in favor of keeping it open,” said councilmember Chris Haver. “There is no easy alternative solution, so our best thing right now is what we have. Maybe the Whetstone project can provide a better spot if it happens. But I would rather see us address this as a more permanent solution and spend the money to make it right and ease the impacts on the neighborhood. I would expect we could get some grants from organizations like STOR to help with the issue.”

Mayor Ian Billick agreed that spending the higher end staff estimate of $90,000 was an appropriate move to make the situation better for the neighborhood. “I think it is a good idea to spend that money and not tie the decision to Whetstone since Whetstone could be five or 10 years out,” he said. “I wouldn’t hesitate to spend that money to reduce the neighborhood impacts.”

The staff recommendation for the money included widening the access lane to the site through more paving and clearer delineation of the queue. Traffic calming measures would be implemented in the area along with better signage.

“I agree with what Dave said and would like to keep it open,” said councilmember Anna Fenerty. “We can take steps to mitigate the traffic problems.” She asked if further creative solutions might be made and expressed some concern over laying down more asphalt.

Council voted 5-1 to go with the staff recommendation to keep the RV Dump Station open while spending up to $90,000 for neighborhood improvements. Fenerty voted against the motion while councilmember Mallika Magner did not attend the meeting.