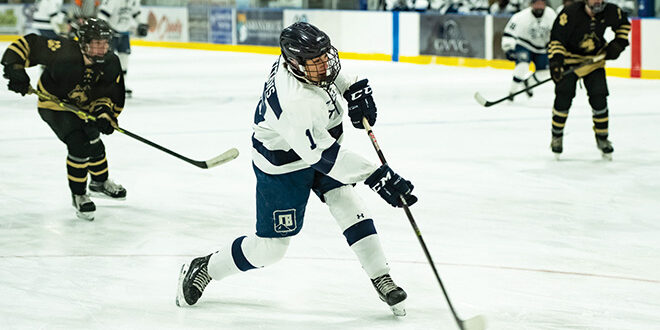 The Crested Butte Titans high school hockey team returned to action last week taking down Battle Mountain on Friday, January 6 before falling to Colorado Academy in overtime on Saturday, January 7. All the while a shortened bench caused the coaching staff to constantly reshuffle lines and call on players to step into new roles.

After a two-week holiday break from games, but certainly not from training, the Titans returned to action against Battle Mountain, seeking to avenge some heart-breaking losses to the Huskies over the past couple of years.

The Titans team this year has something different going on though with a variety of players fulfilling important roles from the first through the third lines and, oftentimes, moving between lines to find what’s needed for success out on the ice.

Friday night against Battle Mountain was no exception as the Titans came into the game missing some players forcing the coaching staff to make adjustments once again.

“We needed some of the younger guys to step up and move into positions they really haven’t played yet,” says coach Billy Watson.

The two-week break from games and the new lines did have a rippling effect on Crested Butte in the opening period as Battle Mountain opened the game in control of the puck and scored in the first 90 seconds.

But before Battle Mountain could build additional momentum, Crested Butte struck back a minute later. The effort of Brendan Hartigan continued to keep the Titans working and when pressure on the Huskies’ breakout forced a turnover, Sam Dukeman picked up the loose puck to fire into the low corner tying the game 1-1.

Battle Mountain kept up their pace and physicality throughout the first period though to dominate puck possession. The Titans scrapped to hang on and Jack Perkins made a couple of big saves to hold the tie.

The constant attack eventually wore on the Titans and a penalty in the final minute of the period gave the Huskies a powerplay and they scored to finish the first period up 2-1.

“The period was okay,” says Watson. “It was our first game back from the break and we came out slow. We weren’t controlling the game like we wanted, they were.”

Battle Mountain came out hot again at the start of the second period scoring in the opening minute to go up 3-1 but the Titans caught a break three minutes later when a Battle Mountain penalty had Crested Butte back on the powerplay. The Titans converted as Grady Dietrich scored followed by Dukeman’s second goal of the game five minutes later during another powerplay tying the game 3-3.

The Huskies responded 90 seconds later scoring a short-handed goal, the type of goal that would stop a surging team in its tracks.

But the Titans proved their resiliency once again as Colm Piccaro and Cael Medina each scored for Crested Butte to cap the high-scoring period and take a 5-4 lead into the third period.

“The penalty kill and powerplay units were getting a lot of minutes and we don’t have a lot of depth, so we were kind of getting worn down,” says Watson. “It was promising seeing the team fight back the way they did. Other than that short-handed goal, it was a good period and the team found a way to keep themselves in the fight.”

Traditionally, the third period is where the Titans shine as shifts from the third line throughout the game, and team conditioning overall, sets Crested Butte up for success later in games. This game was different though due to the succession of penalty kills and powerplays during the first and second periods leaving less opportunity to run the third line as often.

Nevertheless, Battle Mountain was noticeably gassed as passes started missing their marks and puck handling grew sloppy. Meanwhile, the Titans maintained their pace and team play throughout the third period and took advantage of another powerplay in the seventh minute as Grady Buckhanan scored off an assist from Dukeman to put Crested Butte up 6-4.

The Titans then killed a penalty off four minutes later and Perkins came up with additional key saves down the stretch as Crested Butte sealed their sixth win of the season.

“Our best period has been the third and I think it’s all the off-ice work we do,” says Watson. “We have conditioned a lot and that’s where our team thrives. That game was a real test and they did a great job.”

The win improved the Titans’ record to 6-0-1 but did come at a cost. Already down two players from their roster, Crested Butte lost two more, one to a concussion during the game and another to a post-game illness, as they hit the road to face Colorado Academy on Saturday. As a result, Watson looked to his bench once more pulling up two players from the JV team to travel and possibly play on Saturday.

“After the game, Luke (Hartigan) and Max (Dukeman) were hanging out asking about the game the next day and I just told them to bring their gear and be ready to play,” says Watson.

The two players had an immediate impact in the Colorado Academy game as some scrappy defense from Max led to a goal as Luke scored in the 11th minute of the first period for a 1-0 Titans lead after one period of play.

Crested Butte fought back as Blue Gardner scored off an assist from Dominick Cerio to tie the game 4-4 with eight minutes left in regulation. Neither team managed to score down the stretch forcing the game into overtime when Colorado Academy finally eked out the win scoring the game winner in the overtime period.

“We were a little off that game but when you’re missing guys, you’re going to be,” says Watson. “And there were some different things I could have done as a coach. I thought they still did a pretty good job battling through, but they have to be ready after an emotional game the night before to come out the next night with that same fight and grit.”

Despite the loss, the Titans remain at the top of the Mountain League standings with both Glenwood Springs and Steamboat Springs hot on their tail. They spend the next two weeks on the road starting off with a game against Summit on Friday, January 13. Their next and final home game of the regular season is Saturday, January 28.

“I haven’t looked too far ahead, just focused on getting better day by day,” says Watson. “The coaches talked and we came up with a plan for this week to get ready for Summit and that’s about as far ahead as we’ve looked. Just keep taking it one game at a time.”