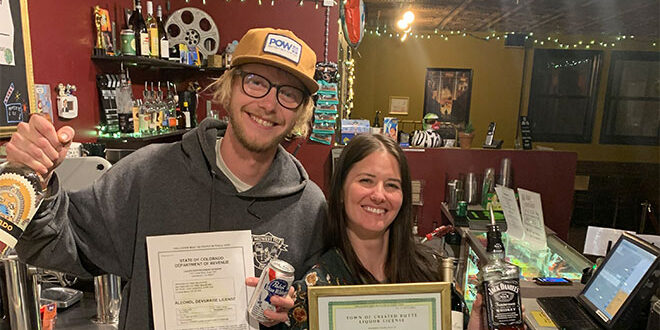 Majestic Theatre back in full swing since reopening

4,393 bags of popcorn sold and counting

Movie magic is back in Crested Butte, and over the last several months since reopening, the Majestic Theatre has been buzzing with film screenings, moviegoers and community events.

“It’s a rollercoaster every day,” says Carrie Wallace, co-founder and executive director of Friends of the Majestic. “People are really stoked and the thing I hear most often is, ‘We’re so happy you’re back open!’ The next thing I hear most is, ‘We haven’t been to a movie in three years!’ It’s fun to see people coming back out to the movies.”

Wallace, along with fellow Majestic employees Conrad Kaul and Whitney Favor, spearheaded the Save the Majestic campaign to help reopen the theater after it was closed in March 2020 due to COVID and then officially closed for good in September 2020. Over the next two years, they established the Friends of the Majestic non-profit and sought to raise $300,000 to help get the theater going again. In August 2022, the team signed a lease and in less than two months got everything ready to open back up and running in September.

And according to Wallace, operations are going great. Since opening in the fall, the Majestic has shown 29 new Hollywood movies and has six part-time staff, along with her and Kaul as directors. The most attended movie so far has been Avatar: The Way of Water, followed by Black Panther: Wakanda Forever, Puss in Boots, Top Gun: Maverick and Ticket to Paradise.

Wallace says that so far crowds have followed the tourist season, with a big uptick in numbers around Christmas and New Year’s. “The holidays were nutso for us, but that was also combined with Avatar coming out,” she says. “But even during the slower weeks, we’ll have some rentals where a ton of people come out.” In general, Wallace says that Sundays are pretty busy and some of the biggest days are the “hangover days,” including the day after Halloween and New Year’s Day.

As part of reopening, the Majestic now offers event rentals and Wallace says they have booked more than 100 rentals so far, including 27 events for local organizations. “We’ve had some great community events,” says Wallace. “We’re really happy to be an affordable rental option for folks and it’s been fun to watch the rental theater catching on. People are starting to realize the array of what can happen here.”

The Majestic has also hosted dozens of free events for the public, such as Nick Cage November and James Earl Jones January. “I see us as the home for the movie nerds and the pop culture nerds,” says Wallace.

Wallace notes that you don’t have to be a part of an organization to rent out the space. The Majestic has already hosted 32 birthday parties, and the theatre has access to “all the streaming accounts” and a growing DVD and VHS collection. “The VHS tapes don’t look good, but it’s nostalgic,” laughs Wallace. “And we hear from a lot of folks that they missed the movie while it was in the theatre. But they can still watch it here.” She explains that before COVID, movies took six months from the theater run to go to streaming channels, but now a lot of things go to streaming at six weeks. That is also why the Majestic is changing the movies a lot quicker. “But if you still really want to see Black Panther on the big screen, when it comes out on Disney+ you can rent out the theater and watch it here,” says Wallace.

The Majestic has also worked with the Crested Butte Community School for film screenings, including showing Dead Poet’s Society to the senior English class. “We’re showing The Hobbit to the middle schoolers next week because they just finished reading the book,” says Wallace.

Since reopening, Wallace says they’ve also upped their concessions game having acquired a liquor license. “The liquor license was a big thing. We now have three beers on tap, four wines, all sorts of liquor, five signature cocktails and an ever-changing specialty cocktail,” she says. The Majestic has also expanded its concessions offerings to include pickles, cookies, jerky, new candy, kombuchas, CBD drinks and sparkling waters. Wallace says the next big project is to get a pizza warmer so they can sell pizza slices. “I would love to get a dishwasher this year to be able to get more reusable products as well.”

Wallace says they have also increased their tech capacities with a new sound board, video switcher and wireless microphones. “The wireless mics are great for Q&As and presentations, and the video switcher allows us to have multiple things plugged into it and we can go seamlessly between things. It’s easier to do slide shows or switch from a movie to a slide show at intermission. We’ve really upped our game.” The theater also has a new mural by Sarah Beabout, and they’ve added games and an old TV playing VHS movies in the lobby.

Looking ahead, Wallace is excited for what’s to come at the Majestic. “There are some big movies coming out this year and we want to keep the fun events coming.” Some events in the pipeline include the Sweaty Kids film fest on February 9, Dark Side of Oz with KBUT on February 16, an Oscar Viewing Party on March 12 and Karaoke Nights. “Now that we have our staff and the first few months under our belt, we’re excited to start applying for grants and figure out how we want to reinvest in the theater,” says Wallace. “I’m excited to start looking ahead.”