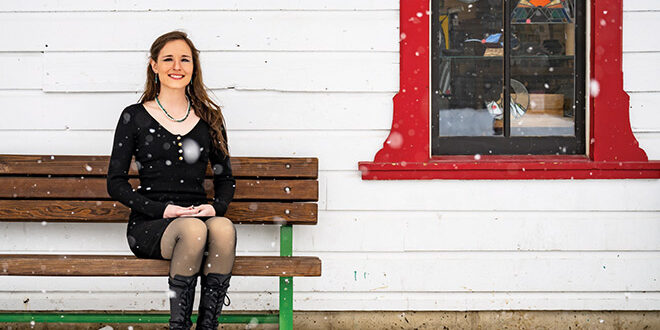 Alyssa Moore says she feels the toughest thing about going to Western State College (WSC but now Western Colorado University) after having grown up here is how many people the valley has lost in that time. She’s referring to suicide and backcountry accidents: “Two separate categories but to me, it’s the extremism of living in a place like Crested Butte. I’m proud and relieved about the more recent efforts to address mental health in our valley,” says the 2014 WSC graduate with degrees in sociology and psychology. Although she was born in Fairbanks, Alaska, she was only six months old when her parents, Jeff Dautrich and Joanna Sitler-Dautrich moved to CB.

Growing up in CB South, hers was the last kindergarten class at the old school as her first-grade class started at the new school, CBCS. A childhood spent in CB meant spending a lot of time outdoors. “We were playing in the ditches and the park and roaming the empty hillside of upper CB South where there were very few houses in 1995. You could still see the mountain from our house but within five years the view was blocked by buildout.” Still, Alyssa talks of the freedom they had as kid. “You’d leave the house for hours and parents didn’t worry about where you were. We just roamed in packs. Even in town, with my townie friends, we roamed the streets, Peanut Lake and the surrounding areas.”

High school was certainly interesting, she recalls. “You have a few people you have a crush on, and you wind up dating them later. We had a tight-knit group of friends who weren’t popular. There was a little bit of dating in the group but not much because we were all such good friends.” Growing up here isn’t easy for everyone, Alyssa feels. “With such small groups, the possibilities of making friends is less and the chance for cliques to form is a lot more elevated. The emphasis on sports and the cost of living in CB makes it very easy for children to stand out, meaning, it’s easier to get called out, picked on and ostracized by those who don’t fit the mold. Bullying is a problem everywhere and not one that CB escapes but one that escapes the public view in CB. I didn’t grow up poor, but I also didn’t grow up well off.”

Soo-Bahk Do was Alyssa’s preferred activity. “I learned to ski and walk at the same time,” she laughs. By ninth grade, she wasn’t happy at school and insisted she be pulled out. Her parents eventually acquiesced and enrolled her at the Gunnison Alternative High School in her sophomore year. “Class sizes were smaller and teacher and student interactions were better. It was a school for outcasts and f*ck ups,” she describes, and she felt it was more sincere and thoughtful. It was then that she began to recognize the importance of mental health.

Although she loved going to the Alternative School, her love of music pushed her to Gunnison High School for her junior and senior years. “I played tenor sax and was in marching band, normal band and choir. I would also play with bands after school a few times a week, like the WSC band and the symphonic band.” She graduated in 2009 and enrolled at WSC to pursue a music education degree.

While Alyssa was still in high school, she began to suffer from Fibromyalgia, a chronic pain disorder. By her freshman year of college, doctors had her so drugged up she barely made it through classes and she began seeking alternative treatment. After ortho-bionomy sessions, Alyssa was able to function again. That led her to changing her degree from music to psychology and sociology. “One of the things that I learned in college is that 90% of psychology majors are trying to figure out what’s wrong with themselves. I certainly came under that category myself,” she realized.

During her sophomore year of college, Alyssa reunited with her lifetime love, Sam Moore, who she had dated in high school and had known since kindergarten. “I always had a crush on him. We also trained in Soo Bahk Do together.” In 2014, they eloped to Italy for a month. Sam had a year of college left and she was working at Misty Mountain Floral, Reuben’s in CB South and Paragon Art Gallery. “I’ve been making jewelry with dad since I was three years old, and I grew up in the Paragon Art Gallery because dad was a member and immersed in the arts in CB for most of my life.” After Sam graduated in 2015, the couple decided to experience the world outside of the valley, so they moved to Denver.

They spent five fun-filled years there, says Alyssa. “Moving to the Front Range enabled me to seek out mental health services that were never available in CB. My time in Denver allowed me to work on myself outside of the bubble.” As an added bonus, the couple experienced more live music and good food than they ever thought possible, she says. “We were both developing our careers. I was marketing director for a chain of dispensaries.” And then COVID hit.

“We spent 2020 and 2021 locked inside luxury apartments on the Front Range with very little contact with the outside world. That’s when we really started to miss our family and the community we were raised in. Nothing shows you a lack of community more than being locked in an apartment building with a bunch of strangers. We wanted back into the bubble.” They were able to return October of 2021 because Sam’s job allowed him to work remotely during the pandemic. Alyssa had quit her job in the pandemic due to poor COVID protocols, so as she puts it, “I got to play housewife for a lot of the pandemic.”

They knew the main problem in moving back was going to be the lack of housing. “We made the tough decision at 30 years old to move back in with a parent,” she says. They moved in with Sam’s mom in town. The idea was that they’d save money to pay off their student loans and eventually put a down payment on a house. “There’s no place we’d rather settle down and buy a house than in our hometown, but the more we look into it, the more unlikely it seems. The main challenge we’ve run up against with local affordable housing programs, including deed restrictive housing, is discrimination against remote workers,” she says, lamenting that they don’t qualify because more than 50% of their combined income is earned outside of the county. Sam is the main breadwinner and works remotely, even though they’ve lived here all their lives and pay taxes here. “We’ve joked about getting divorced just so I can buy a house for us,” she quips.

After moving back, Alyssa really wanted to dive back into the community and she was happy to have been offered the position of events and operations manager for the CB/Mt. CB Chamber of Commerce and visitor centers where she runs a lot of the town’s special events like the Fourth of July celebration, Chili and Beer Fest and oversees the operations of both visitor centers. “I work with local businesses, non-profits and individuals to enhance everyone’s experience in CB.”

Her creative business is Alyshine Jewelry Design and she’s been a member of Paragon Art Gallery, the town’s co-op of local artists, since before she moved to the Front Range. Her jewelry is shown at the gallery but she’s a CB creative in other art forms as well. “Most recently, I’ve been making costume pieces, like sculpted horns and masks.” And she had the honor of the title of Royal Milliner for last year’s Flauschink Royalty, designing and constructing the Royal Crown and Scepters. “I’m a general maker of things,” says the creative.

Alyssa says that they don’t know what the future looks like for them at this moment in time but they have some ideas. “Ideally, we’ll grow old together in our own home here in CB. But there’s a very real possibility that we could end up living on some beach instead because beaches are more affordable than here and we both have dreams of seeing the world beyond the bubble,” she says. “There are no children planned in our future, but we’d like to grow old together in Crested Butte with lots of cats.” 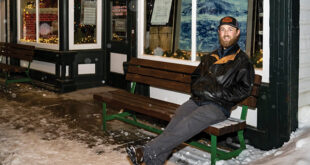