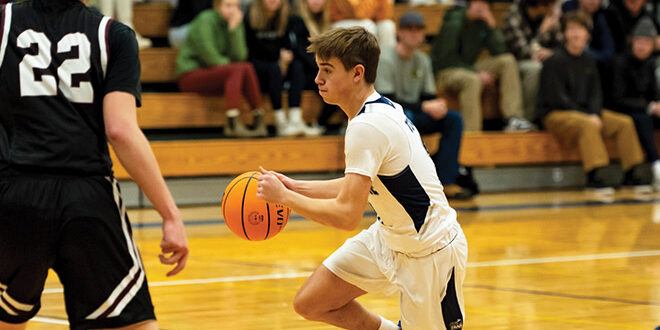 “It was a really hard-fought game and we just didn’t quit, and we never will”

Following a long break from games due to the holiday season, the Crested Butte Titans returned to action when they hosted the Telluride Miners on Saturday, January 14. Unfortunately, the excitement about returning to action was quashed as they fell to the Miners 42-37.

Crested Butte looked to have everything in place at the start of the game as their defense forced a series of Telluride turnovers and baskets from Riley Davis and Weston Miller had the Titans up midway through the first quarter.

The turnover bug then hit the Titans though and the Miners climbed back into the defensive battle to pull within one by the end of the first quarter.

“I felt our energy was awesome to start and the boys were as ready mentally as they could be,” says coach Hannes Gehring.

Ben Barney then gave the Titans a spark they needed opening the second quarter with a block. Crested Butte’s defense continued to keep the Miners’ shooters off balance and Kasen Cox, Miller and Barney all scored for a 12-7 Titans’ lead.

But just as the Titans were on the cusp of building on that lead, Telluride battled back hitting a three-pointer and a couple of free throws to pull back within one by halftime.

“We were playing a lot of zone and our zone was really dynamic when we had energy, but I felt like we got a little tired in the second quarter,” says Gehring.

Crested Butte opened the third quarter with a press hoping to break the spirit of Telluride, but the Miners appeared unfettered by the pressure to keep the Titans close. Miller scored inside and Jamis Matlock drained a three-pointer, but Telluride continued to answer back. Eli Hulm hit a three-pointer as well to build a little more breathing room for the Titans once again but, once again, Telluride would not fold and when they hit two three-pointers to close the quarter, the Miners were on top 27-23.

“We’re pretty evenly matched teams and those threes were instrumental in keeping them in the game,” says Gehring.

Now it was time for the Titans to prove their grit entering the fourth quarter down four points. Telluride held them at bay through the first three minutes but when Barney pulled down two offensive rebounds in a row and scored, Crested Butte had pulled within one point and were surging.

“Ben is really starting to come into his own,” says Gehring. “He’s developed tenacity when rebounding and is finding confidence when shooting the ball.”

Their rally was short-lived though as another three-pointer from Telluride had them up 37-31 with under two minutes left to play. Another offensive rebound by Barney set up Davis for a three-pointer and when Telluride looked to kill the clock, Crested Butte was forced to foul to stop the clock. The initial effort paid off as the Miners struggled from the line and Davis hit another bomb to close to within two points of Telluride.

“We could have folded right then and there, and we didn’t,” says Gehring.

The Miners stayed composed though and while they had missed earlier free throws down the stretch, they hit three of four in the final moments of the game to seal their 42-37 win. Davis led the team with 13 points, Miller added in eight and Barney dropped in six points.

“They had two missed free throws that they got the offensive rebounds on and we’re usually very tenacious on rebounds,” says Gehring. “When you’re playing the fouling game you really have to seize those moments and not give up offensive rebounds when they’re missing free throws because, eventually, they’re going to start hitting them.”

Still, Gehring was happy with the effort of his players and took on much of the responsibility for the outcome.

“I put this one squarely on my shoulders,” says Gehring. “We should have moved out of the zone earlier and that may have stopped those threes from happening. It was a really hard-fought game and we just didn’t quit, and we never will. I have a ton of pride in the kids when they play like that.”

The Titans now enter the grind as they start league play with Center on Thursday, January 19. They remain on the road the following week to face Sargent and then return home to host Trinidad on Saturday, January 28.

“The challenge is we almost play a game every other day now so it’s hard to continue working on fitness,” says Gehring. “But the boys know what to expect and with so many games, it will naturally start to happen.”