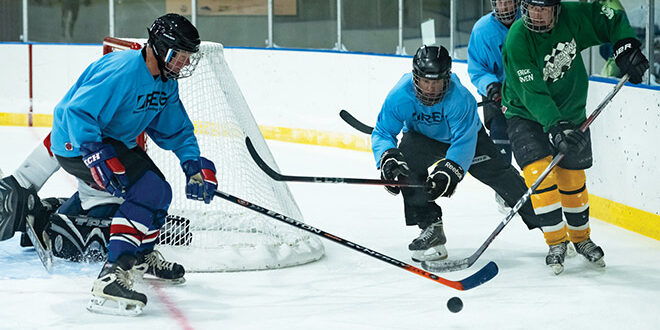 Ska brews up a can of whup over REG

“Kinda like the Georgia-TCU game, a lot to a little”

It’s about as good as it gets right now given the current housing crunch, increase in cost of living, war in Ukraine, abject poverty worldwide and the storming of the Brazilian capital building, among other things. But, aside from all of that, it’s about as good as it gets in our utopian bubble with storms raging through the valley and town league hockey season upon us as Ska Brewing and REG faced off in the first game of the season on Monday, January 9 at Big Mine Ice Arena.

Which begs the question once again…Are we a hockey town with a skiing problem or a ski town with a hockey problem?

Anyone else out there miss the nightly special at Donita’s? I mean sure it always involved a blue corn tortilla and asiago cheese but sometimes there was squash in there and sometimes shredded pork was in there and all of the time it hit the spot.

What about the Brick Oven pizza? I mean, even Dan Loftus admitted it wasn’t that good, but it hit the spot in a pinch.

Where’s a guy gotta go to get a Kansas City Chief?

Still, amidst all of this local and global upheaval and uncertainty, we got town league hockey, actually town league hockey 2.0. This year not only are there more players than ever before, but WEHA and executive director Cody Aidala have taken town league hockey up a notch with computerized scoring including game stats available online and a heater that actually works in the scorer’s booth/press box. Not only that, but Aidala was on hand to ref the opening game between homegrown hockey talent Ashton Mabry running the Zamboni and homegrown Titan athlete Erin Kelley working the scoreboard.

Given all of that, and a decent crowd for the opening game, excitement was somewhat subdued for that first game, perhaps people were saving themselves to cheer and jeer the defending champs Kochevar’s in the game later that evening.

Still, once the skating started, the energy picked up as both teams came out at mid-season pace and REG seized on it first as Ben Barocas fired a shot in the opening minute denied by a stick handle save from Ska goalie Eric DiMarco. Ska came back up the ice to fire a shot off the post which then turned the puck back the other way for REG and this time Barocas found the net for an early 1-0 REG lead.

Despite the effort of REG defensemen Ian Dethloff and seasoned local sports veteran Michael Blunck, Ska Brewing started to warm up and then get red hot firing off the next three goals in a display of Skamination.

REG goalie Lucas McMullen managed to turn away the first of several shots on goal until Joey Otsuka set up Stu Jernigan on the doorstep and Jernigan stuffed the puck in. Thirty seconds later Loftus assisted Michael Fabbre for a second goal and Ska proceeded to pin and pound REG with shots. Two minutes later Fabbre played the puck cross ice to Cole Hanson and Hanson scored to put Ska up 3-1 at the end of the first period.

Both McMullen and DiMarco took center stage for the first half of the second period with each making brilliant saves at both ends of the ice while REG started to gain steam once again.

But before REG could make it a game, Ska rattled off another three goals over the course of two minutes. Jernigan, Otsuka and Fabbre (if you’re injured in a car crash, call Jernigan, Otsuka and Fabbre. We get Results!) all found the back of the net and while Betsy Welsh tried to generate some offense for REG on the wing, attempts were pushed aside, and Ska was up 6-1 heading into the third period.

Ska tacked on a seventh goal midway through the third period, but REG did save some face minutes later winning a draw in Ska’s zone to set up Baracos for a goal. Only problem was, Otsuka decided to put the puck where mom keeps the peanut butter, and her pills, to finish off REG 8-2 and perhaps, just maybe, send a message to Kochevar’s.