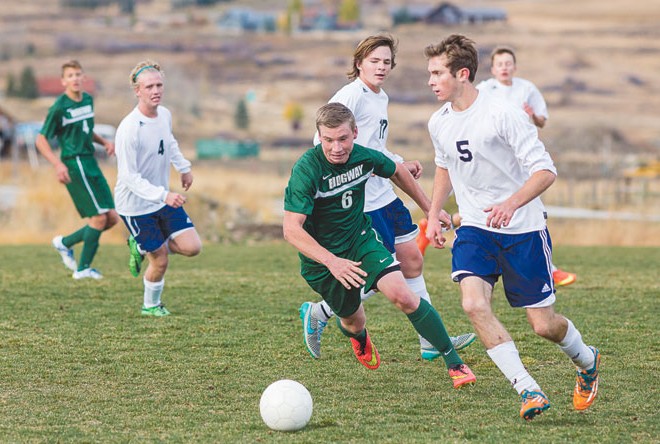 Titans edge out win over Ridgway

It hasn’t been pretty all season for the Crested Butte Titans soccer team and when they dropped three games in a row in the middle of the year, it looked like they would be settling into the off season earlier than usual. But, as they often do, the Titans rallied when needed most and are in the midst of a three-game winning streak including a 2-1 win over the Ridgway Demons on Tuesday, October 20 thus earning a spot in the state tournament.

Ridgway is a young team who play solid soccer with a well-organized defense but the Titans were on their home field for the last time this season, potentially fueling their fire. Furthermore, they just played some of their best soccer of the season against the previous opponent so the team was on the upswing.

But, October break hit prior to the Ridgway game and while the team held workouts, the energy was missing and it appeared they were taking another step backwards.

“We started with an intersquad tournament and spirits were high,” says coach Ben Davis. “And we definitely saw some glimmers of where we left off but there was a lack of hustle. They came to play but their heads weren’t in it.”

That energy carried over into the Ridgway game. The Titans opened the game with possession in their favor but the Demons dominated 50/50 balls and everything in the air as Crested Butte played at a lackluster pace. While the outside midfielders Gus Hensley, Cam Curtiss, Merlin Mapes and Walker Carroll all worked hard to find room down the flanks, the Titans attack struggled in the final third. Meanwhile, the Demons had equal trouble finding anything on their attack and the teams closed the first half locked in a scoreless tie.

“There definitely wasn’t the level of hustle we were expecting but their play wasn’t bad,” says Davis. “Our outsides were working hard but things were breaking down in the middle with lackluster passing and bad first touches. The Ridgway defense held their own and their back line outhustled us.”

Things went from bad to worse for the Titans in the second half. Demons pressure forced disjointed play from Crested Butte as they continued to struggle working the ball into a cohesive attack. Ridgway was eventually rewarded for their effort 15 minutes into the second half as Titan goalkeeper Josh Pruett bobbled a long shot by the Demons and the ball slipped over the line for a 1-0 Ridgway lead.

Typically, a shock to the system such as that can wake the Titans up and they did pick up the pace a little in the ensuing minutes. They got a break five minutes later when a shot from Noah Dumas bounced over the arm of the Demon net minder to tie the game 1-1. The Titans defense continued to keep the Demon attack handcuffed and Pruett pulled off two great saves as time wore on to hold the tie and the Titans finally shifted gears for the final 10 minutes of the game. Carroll provided the spark for the Titans with his hustle and Oliver Housman stepped onto the field to provide some coherence in the middle.

The Titans eventually seized on the shift in momentum as Hensley took a pass wide and slotted the ball through the Demons defense for Jordi Nichols. Nichols sprinted onto the through ball and drilled his shot past the outstretched arms of the Demon goalie, rippling the back of the net for a 2-1 Titans lead with five minutes left in regulation.

The Titans resorted to pure grit in the final five minutes, holding off any chance for Ridgway to tie the game and sealing the 2-1 win.

“I think they picked up the pace,” says Davis. “The gaps that were there in the first half were filled by players who were ready to pick up the play and we did a better job in the second half of building our attack.”

While Crested Butte has qualified for the state tournament they still have a bit of unfinished business in the regular season. The Titans close out the regular season in Telluride on Thursday, October 22 and are looking to avenge a 5-3 loss to Telluride earlier this season.

“We can move in only one direction and that’s up,” says Davis. “I’m hopeful the play will be much better than the first time we played them and we will have Patrick (Seifert) for this game which will be a huge help. It will be a hard fought game and if we can exploit their high defense we have the making to put the game away and finish the regular season with a win.”