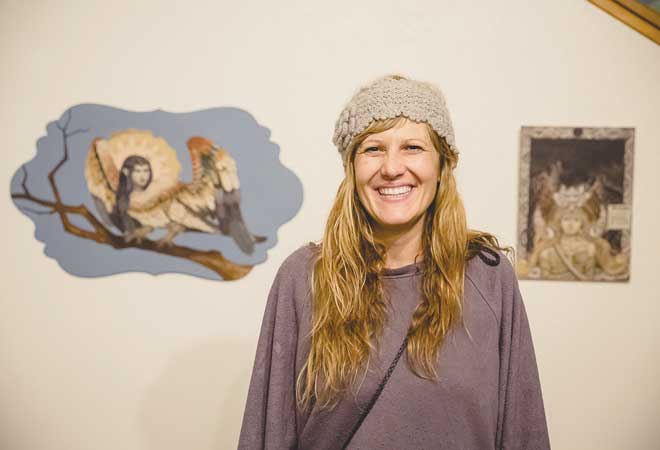 ARTIST OPENING: An artist reception for Katey Nelson was held at the Piper Gallery at the Center for the Arts on Friday, October 19.

March Against hate in CB

B’nai Butte, along with several local Congregational Churches, will be participating in a Tree of Life Vigil and March Against Hate, to remember and memorialize the victims, this Thursday, November 1. This will take place at 6 p.m. at the Four-way (starting at the clock) in Crested Butte, followed by a march to Rainbow Park, where there will be a candlelight vigil. Participants will then say Kaddish. May their memory serve as a blessing. Any questions, please contact Leslie Elfenbein (on Behalf of the B’nai Butte Board) at 203-470-3942.

One of the signs of a new ski season

Opening Artist Reception at the Piper Gallery on Wednesday

Hungarian artist Marcus Goldson’s watercolor paintings and prints in “The Daumier of Budapest” express the vibrant absurdity of Budapest’s streets. Goldson’s technique of caricature has been described as an extrapolation of keen observation, and a kind of truth-on-steroids. Show runs November 5 to December 3 at the Piper Gallery. Everyone is invited to the reception on Wednesday, November 7 from 5 to 7 p.m.

Gallery Openings at the GAC on Friday

Two Gunnison Art Center art openings are happening this Friday. Attend a Western Colorado University Art Department B.F.A. Senior Student Exhibition on Friday, November 2, from 5 to 8 p.m. in the Gunnison Arts Center’s Main Gallery. “Harmonious Discord,” printmaking by Zach Goering, is a visual creation influenced by music. Each piece has its own soundtrack that Goering listened to during the creation. While Goering’s work is cohesive but not completely registered, his work creates dissonance in the eye of the viewer. In the Upper Gallery on the same night, a show entitled “Wild Visions,” by nature photographer Arden Anderson, will take place from 5 to 8 p.m. Arden has a passion for wandering in the wild places of the planet. As a wildlife biologist, he tries to immerse himself in and understand different ecosystems and their inhabitants from the mountains of Colorado to the steaming jungles in the Amazon to the frozen tundras of Antarctica.

Give creatively this holiday season

Cameos: What would be your political campaign slogan if you were running for office?

Share
Previous Legals: October 26, 2018
Next OVPP: The philosophical and the practical