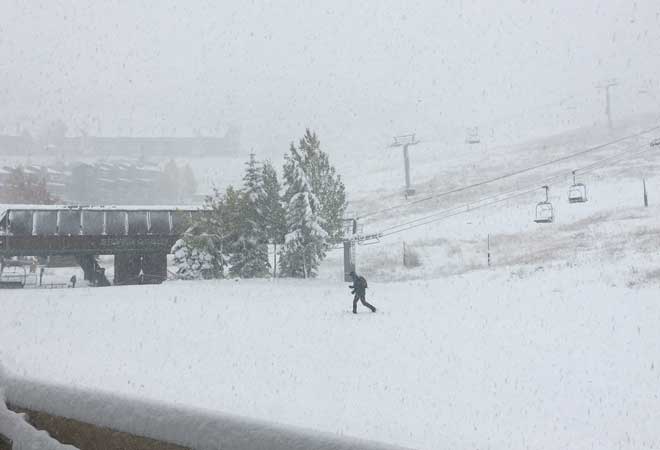 In the current period between fall and winter there are the unspoken games that must take place in every ski town. You have the people who see how long they can go and refuse to put on closed-toed shoes after a summer of flip-flops. They are the ones who wear sandals until the first measurable snow makes it impossible. As the temps hover around freezing, they may move to light shoes but refuse to wear socks.

There’s the game of telling everyone that you haven’t yet turned on the furnace. For the long-timers it may take several nights into the teens and a dog’s frozen water bowl before they flick the switch to allow the dusty warm air from the heater to kick in.

In the bigger picture, there comes a time as a ski town resident when you have decided you are getting too old to go the late showing of the latest MSP ski film and admit that doing shots of Jaeger at the after party is better replaced with the 6:30 showing surrounded by jabbering elementary school kids—and eventually the decision to just forgo the movie altogether and get stoked for winter by putting the ski locker on your credit card.

The game of Can You Be the Last One to Stop Wearing Shorts? is not even an issue in Crested Butte, with Al Smith and Mikey Shorts carrying the banner for years now, no matter what the weather.

But what is not a game is the amount of time we have left to make significant changes to our lifestyle (beyond the flip-flops) to protect the climate. The latest report by the UN Intergovernmental Panel on Climate Change (IPCC) says we humans have about 12 years to get our binging under control and slow down climate change before the tipping point is reached and the planet moves into its next stage that makes it pretty miserable for people. According to the report that came out Monday, the world’s leading climate scientists have warned there are only a dozen years for global warming to be kept to a maximum of 1.5°C (centigrade), beyond which even half a degree will significantly worsen the risks of drought, floods, extreme heat and poverty for hundreds of millions of people.

The authors say solutions are possible but it will take political will. Dang. Sorry, kids. Political will versus convenience? That answer seems an unfortunate foregone conclusion.

“It’s a line in the sand and what it says to our species is that this is the moment and we must act now,” said Debra Roberts, a co-chair of the working group on impacts in various news reports found online. “This is the largest clarion bell from the science community and I hope it mobilizes people and dents the mood of complacency.”

The world is currently 1°C (1.8°C) warmer than preindustrial levels. Doesn’t really sound like much, does it? Following devastating hurricanes in the United States, record droughts in Cape Town and forest fires in the Arctic, the IPCC makes clear that climate change is already happening, has upgraded its risk warning from previous reports, and warned that every fraction of additional warming would worsen the impact. Reforestation is essential to all of the recommended solutions, as are shifts to electric transport systems and greater adoption of carbon capture technology.

The report says that heavy taxes or prices on carbon dioxide emissions—perhaps as high as $27,000 per ton by 2100—would be required. But such a move would be almost politically impossible in the United States. That’s just who we are as we make America great again. Under the Obama administration, government economists estimated that an appropriate price on carbon would be in the range of $50 per ton. Under the Trump administration, that figure was lowered to about $7 per ton.

And understand, supporting something like that would have giant ramifications here in Crested Butte. After all, a big carbon tax will impact a place and economy that relies on automobiles and airplanes to get the economy to its location. And it’s not like this location is the most carbon neutral to begin with, as demand for heat and electricity is sort of high most of the year. So, Crested Butte will be impacted. But at least Elk Avenue is far from the coasts (for the moment, anyway) that will likely be swallowed up as ocean levels rise.

Lawmakers around the world, including in China, the European Union and California, have enacted carbon-pricing programs. The report also found that, by 2050, use of coal as an electricity source would have to drop from nearly 40 percent today to between 1 and 7 percent. Renewable energy such as wind and solar, which make up about 20 percent of the electricity mix today, would have to increase to as much as 67 percent. Donald Trump, who has made fun of the science of human-caused climate change, has vowed to increase the burning of coal and said he intends to withdraw from the Paris agreement.  Sorry kids.

This planet isn’t going anywhere but the human species might be. This report is yet another in a line of “wake-up calls” that started coming decades ago. While most other reports put off the dire ramifications well into this century and made it feel like something we wouldn’t experience, this one says those of us alive 25 years from now will feel the drastic pain. So it comes down to political will. Dang. Sorry about that, kids—and by kids, I mean mine and yours and Trump’s. Depending on political will does not sound too optimistic—but there is a chance if we all get behind science and take big actions.

Like with so many things we are experiencing at the moment, perhaps the best thing you can do is vote. Vote for those who trust science and are willing to make hard choices to protect the future world of your kids and grandchildren. So do it. Register to vote and exercise that right that will help shape the policies of this country.

In the meantime, maybe it really is best to keep the furnace off for a few more weeks. It’s not a game for our children.