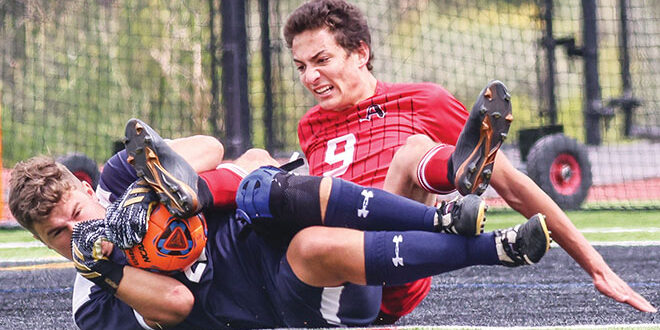 The Crested Butte Titans boys’ soccer team opened the 2021 season on the road and came home with two wins taking down Basalt 5-2 on Friday, August 20 and then edging out a 1-0 win in double overtime against the Aspen Skiers on Saturday, August 21.

Both Basalt and Aspen are non-league opponents and the Titans put them on the schedule to get some competition from bigger schools in the 3A class.

Basalt is often hit or miss as far as level of play but this year they proved to be in the midst of rebuilding their program with a new coach and a young squad. While Basalt was organized and proficient with and without the ball, Crested Butte’s size and experience proved a major advantage over the 80 minutes.

The Titans came out on the gas in the opening minutes as Jacob Bernholtz scored two goals off assists from Grayson White in the first four minutes of the match.

Basalt’s ball pressure and speed did handcuff the Titans for the next 25 minutes but Crested Butte found their scoring touch once again in the 30th minute when Jamis Matlock slipped a pass through the Basalt back line to Bernholtz and Bernholtz beat the Basalt keeper for the hat trick and a 3-0 Titans’ lead at halftime.

Crested Butte opened the second half at race pace once again and scored in the fourth minute when Davis McNeill headed in a corner kick from Rowan Featherman.

Basalt eventually responded when a foul in the 18-yard box offered up a penalty kick and the Basalt shooter converted. Crested Butte scrambled a bit in the following minutes but eventually found their pace again and Matlock slid another pass through to Bernholtz. As the Basalt keeper stepped out to shut him down, Bernholtz dished the ball off to White and White finished off the counter attack for a 5-1 Titans’ lead.

Basalt did take advantage of one last Crested Butte breakdown to score the final goal but the Titans were well ahead and finished off the win.

The team remained in the Roaring Fork Valley overnight and headed up valley to face Aspen on Saturday and found themselves in a dogfight testing the resolve of the Titans.

“Aspen was a solid team, good positioning and pressure on the ball,” says coach Bob Piccaro. “Their offense was fast and made timely runs.”

The ball pressure had the Titans scrambling to get the ball out of their half and when they did, they struggled to mount a cohesive attack on the well-organized Aspen defense.

Crested Butte made a few adjustments at halftime to swing the game back in their favor at times but Aspen’s play still offered up several chances. Fortunately the back line was quick enough to adjust and goalie Cedar Fessenden was spot on in cutting off shooter’s angles.

“We talked about better movement of the ball and playing the way you face and making the easy pass rather than trying to dribble through the defense,” says Piccaro. “We also talked about forwards timing their runs better to hit the back line at full speed.”
Both teams failed to break the seal in regulation time sending the game into overtime with the first team to score winning. They battled through a scoreless first overtime but four minutes into the second overtime, the effort of Nathan Sawyer found White open on the flank and White placed a cross into the 12-yard area where Bernholtz nodded the ball past the Aspen keeper for the 1-0 win.

“I think we amped it up in overtime and they started to slow down after their initial surge and our goalie was strong during that surge,” says Piccaro. “The opening two wins were huge for confidence and set a good tone moving forward. We still need plenty of work on shots, movement off the ball and all 10 players on the field pressuring the ball as a unit, not just the defense.”

The Titans return to play next week when they host 3A non-league opponent, St. Mary’s, on Tuesday, August 31 at 4 p.m. at Rainbow Park.