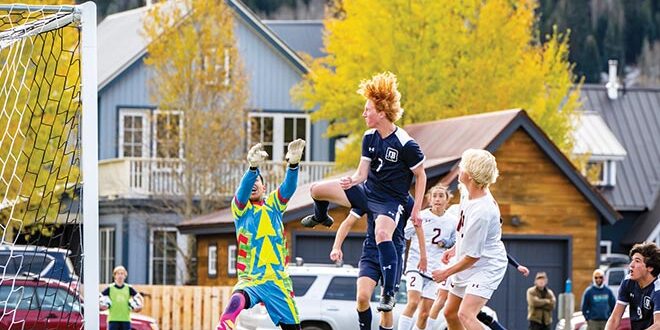 First round of state tournament at WCU Friday

The Crested Butte Titans soccer team closed out the regular season falling 2-0 to the Telluride Miners on Saturday, October 23. The Titans now turn their attention to the 2A state tournament and will host Rocky Mountain Lutheran on Friday, October 29 at the Western Colorado University (WCU) turf field at 5:15 p.m.

“Workouts were ok,” says coach Bob Piccaro. “The team was in cruise control coming into the week, and thought that doing the status quo was good and not pushing ourselves as hard as we could go to keep growing. But that is easier said than done.”

The two teams came out firing on all pistons in a classic ski town showdown. The Miner’s energy set the tone early, but the Titans stepped up their effort to match the pace of Telluride as the two teams battled back and forth all 40 minutes of the first half. Crested Butte had their chances but struggled to convert and the Miners’ attempts came close but the two teams entered halftime tied 0-0.

“We had our chances with some good crosses from the corners but had too much play up the middle and Telluride played us well,” says Piccaro. “They came to play and some of our subs/starters did not elevate their game, which was needed for this game.”

Crested Butte looked to step up their game to open the second half and with more attention to the flanks, had two great chances on Telluride’s net in the opening 15 minutes with one shot hitting the post and another missing the frame all together.

“We did a better job for the first 20 or 25 minutes, taking it to them with more opportunities but just could not put it away,” says Piccaro. “Then we became complacent on the whole with some players totally falling off their games.”
Telluride remained focused on their efforts though and 25 minutes into the second half converted on a set play to take a 1-0 lead. The goal rattled the Titans and they struggled to recover their rhythm scrambling to retain their composure with the ball.

“A bit of panic set in and we were not playing our game, we had too many long balls and a boom ball mentality,” says Piccaro. “It was the first time the team has been down all year and when you are in unchartered territory, it is a learning experience.”

The Miners’ effort paid off once again as they scored eight minutes later to take a 2-0 lead and while Crested Butte regained their composure for the final 10 minutes of the game, it was too little, too late as they ultimately lost 2-0.
“I think the loss was good because the team now knows what it is like to play from behind and what it will take to win states,” says Piccaro. “Nothing is given and everything has to be earned. It was a good grounding and reality check for us. Telluride came to play for 80 minutes and that’s what we need to do in order to win.”

Crested Butte now heads into the post season and will face Rocky Mountain Lutheran in the first round of the tournament at the WCU field on Friday, October 29 at 5:15 p.m. If they win on Friday, they will play either Loveland Classical or Telluride in the quarterfinal game on Saturday, October 30 at Rainbow Field at 1 p.m.

“Each and every player on the squad has to refocus and centralize for the mission ahead, recommit to the soccer family,” says Piccaro. “This means eating, sleeping and playing harder than they ever have in their life at practice. To repeat a championship is one of the hardest things to do and it will take them more than they know to get there. They have it in them, now they have to go out and work for it to earn it.”