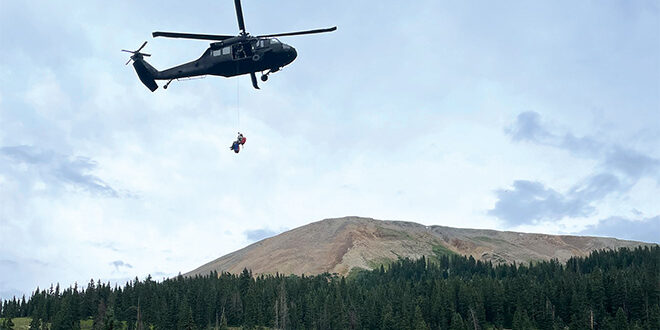 The Crested Butte Mountain Rescue team has had a steady summer having responded to about a half dozen active incidents since June along with being put on alert when hikers didn’t return in the expected time. A serious incident that took place last week when two 15-year-olds had to be rescued from deep in the backcountry and flown to St. Mary’s Hospital in Grand Junction for treatment was one for the books, however.

Mountain Rescue president Randy Felix said the most recent incident that occurred on Wednesday, July 27 was also one the most complex. “There were a lot of moving parts and players involved in this call,” he explained. Ultimately two teens were airlifted to Grand Junction for medical care.

Team members were alerted of a serious UTV (Utility Terrain Vehicle) rollover up the Cement Creek drainage near Italian and American Flag mountains about 3:30 p.m. Mt. Crested Butte police officers were some of the first safety personnel on the scene and in a press release said two teenagers, a male and female, were seriously injured.

According to a Mountain Rescue report, the UTV rolled on an extremely rough 4X4 road and went down a steep slope. When rescuers arrived, there were several bystanders at the scene attempting to help the victims, but the scene was described as “chaotic.” Despite some wet weather, a CareFlight 4 helicopter out of Montrose was called in and able to fly to the area but could not find a safe landing zone close to the scene of the accident so it flew to the Buckhorn Airport and waited for the rescue team to bring the accident victims to the airport.

“There were two 15-year-old juveniles driving the UTV,” according to the Mountain Rescue report. “One was ejected and was approximately 300 feet down the slope.  The other juvenile was still with the vehicle and was approximately 450 feet down the slope…While rescuers were working hard on scene to stabilize the patients, SAR command was working on alternative plans.”

Contact was made with state and federal authorities to ask for a Blackhawk hoist helicopter from the Colorado Air National Guard that could come in and lift the victims from the extreme terrain. Because the equipment needed was already on a mission in Aspen, the Crested Butte request was denied. But local search and rescue people persisted with their contacts, and approval was given after the Aspen mission was completed. Instead of taking hours to arrive, the hoist helicopter arrived on scene in about 40 minutes. Meanwhile, because the extent of the injuries were not able to be ascertained in the field, a second CareFlight helicopter was requested out of Rifle.

“While all the planning was happening on the back end, the field members treated, packaged the patients, and got them ready to uphaul to the road,” the report stated. “In the event there was an issue with the hoist operation, the patients were going to be moved up the slope to the road if a ground transport was needed…But the Blackhawk arrived on scene and a rescue tech was lowered, and they packaged the patient at the UTV and hoisted the patient into the helicopter. The CB Mountain Rescue Team lowered the patient they were uphauling to the flatter part of the slope and a second rescue tech was lowered (from the helicopter to the accident scene). They packaged the second patient and hoisted that patient and in a matter of minutes had both patients in the helicopter and made the short flight to the Buckhorn Airport.”

Both patients were off the mountain and being flown to Grand Junction by 7:30 p.m., about four hours after the CB Mountain Rescue received the emergency call.

Felix said that it took the field members another couple of hours to pack gear and make the long bumpy drive home. Both patients were injured with one having severe but non-life-threatening injuries.

“This was a successful mission with many pieces falling into place in order to make this happen,” he said. “If helicopters would have been unavailable due to weather or any other reason, this would have been a long and complex ground evacuation. Thankfully the injuries were such that this would have been uncomfortable but possible. CB Mountain Rescue fielded 12 members on this call with additional support from Mt. Crested Butte Police Dept., Crested Butte Fire Protection District, Gunnison Valley Health Paramedics, Colorado Search and Rescue Association, High Altitude Aviation Training Site (HAATS) based in Eagle, Colorado and Vail Mountain Rescue.

“CBMRT would like to remind all backcountry users that rescues can take hours or days to complete,” Felix concluded. “Many places in our county have no cell service and a search and rescue response may take hours depending on the location and complexity of the call. No matter your activity, if you are recreating in the backcountry, please be prepared for any eventuality.”