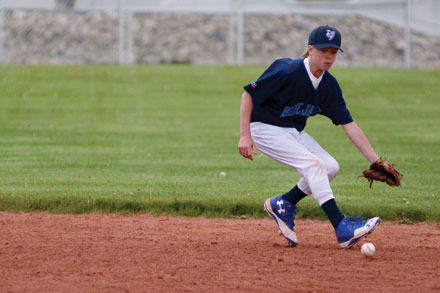 Recover to take down Olathe

it was a classic case of first-game jitters Thursday, May 28 when the Crested Butte Blue Jackets fell to the Gunnison Cowboys 22-4 in their first game of the 2015 season. Fortunately, they managed to shake off some of the mistakes from the Gunnison game to put together a couple of solid efforts on Saturday, splitting a doubleheader with Olathe.
Things were looking okay one inning into the game against Gunnison. The Blue Jackets hitters made contact early in the top of the first for a couple of base hits and the defense looked pretty good as well. While they gave up four runs in the bottom of the first inning, they turned two outs with textbook infield work and Turner Petersen struck out a Cowboy for the third out.
Tommy Linehan led off the top of the second inning with a base hit and eventually scored on a couple of passed balls. Joe Cummins walked and reached third base on a sacrifice hit from Joe Coburn and a failed pick-off play but a strike out soon ended the brief outburst.
Then things fell apart. It was a mix of walks, missing the cut-off man and solid hitting by Gunnison, as the Cowboys scored 11 runs to build a 16-1 lead heading into the third inning.
Gunnison tacked on four more runs in the bottom of the third inning and then added two more before the Blue Jackets’ bats finally found their rhythm at the plate.
Hunter Wright led off with a single and scored on a base hit by Petersen. A walk loaded the bases for Aiden Gundersen and he came through with a two-RBI base hit, but the Cowboys tossed out a runner to end the game.
“Those first two innings were a lot of nerves,” says coach Michael Weil. “We gave them 15 runs on seven errors. They basically forgot everything we’ve been working on. We just told them after the game that we know they can play better.”
The Blue Jackets shook off those first-game jitters over the course of the following 48 hours and refocused for a doubleheader against Olathe on Saturday, May 30.
It became obvious early in the first game against Olathe that the Blue Jackets had moved on from their disastrous start to the season. Paced by quality pitching from Slater Weil and solid defense, the Blue Jackets were up 7-6 after four innings. Olathe retook the lead to go up 12-7 but the Blue Jackets fought back. Twice they had the bases loaded with no outs but struggled to connect at the plate when needed. The Blue Jackets pushed three runs across to close the gap but ended up falling short, losing 12-10.
“We had an opportunity to win that game,” says Weil.
Nevertheless, the ice was broken and the Blue Jackets were feeling it as they headed into the second half of the doubleheader. Paced by a solid outing from both pitchers, continued solid defensive play and some quality hitting, the Blue Jackets cruised to a 24-14 win over Olathe.
“Our errors were way down and we had smart base running with a lot of steals,” says Weil. “I was really proud of the kids.”
The Blue Jackets got two more big tests this week playing Hotchkiss and Montrose and will host their first home game of the season on Monday, June 8 at Tommy V Field at 6 p.m.
“It was a lot of fun,” says Weil. “We’re still missing some power at the plate and still have a lot to work on.”