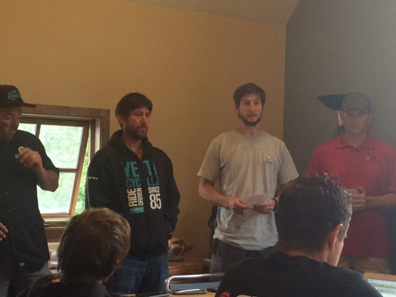 A tragic race accident late Saturday morning has resulted in a death of one of the racers and the cancelation of the rest of the Crested Butte Big Mountain Enduro World Series event.

A memorial ride to honor 40-year-old Will Olson of Edwards, Colorado will take place at noon from the BME base camp in downtown Crested Butte and is slated to take riders up to the Strand Hill trail and back.

According to the Mt. Crested Butte police department, the accident occurred at about 11:50 Saturday morning on Forest Service Trail 400, Star Pass near the Block and Tackle Trail.

At a Sunday morning press conference, race officials said that no one saw the actual accident but Olson suffered a severe impact to his chest. It appeared to be a “freak accident” that occurred about a minute from the bottom of the Stage 3 course. Two riders that started after Olson came upon the scene and saw him lying face down. They immediately began CPR. A third rider continued on to alert medical and emergency personnel. Medics with the event responded within minutes and local police and Crested Butte search-and-rescue arrived shortly thereafter. CPR was administered on the scene for about an hour.

The police reports stated that, “a paramedic transported by Care Flight helicopter arrived on scene and pronounced the rider deceased. The victim was carried to the trailhead by Search and Rescue members. At approximately 4 p.m. the Gunnison County Coroner accepted the victim.”

“It is an incredibly sad situation,” said an emotional Chris Ball, the Director of the Enduro World Series Sunday morning. “Everyone did an incredible job yesterday with Will and we are shattered. We decided to cancel the rest of the event as result of this accident. No one wants to race after this tragedy. A rider’s life is more important than bikes. It’s the right move to cancel Sunday.”

Ball said the accident didn’t take place on an especially technical or fast section of the stage course. He said riders might have been going 20 to 25 miles per hour in that area of the course. There was speculation he clipped a pedal and ejected from his bike. “There was no injury to his head and his bike had no damage but there was blunt force trauma to his chest,” Ball explained. “Medical personnel were on the scene within minutes.”

Ball and BME race director Brandon Ontiveros said that Olson was a regular Colorado racer of the endure events. “He was a very skilled rider and had ridden around the Crested Butte area many times,” said an emotional Ontiveros. “This was a freak accident that happened to a positive soul that was very tight with the bike community.”

Ontiveros said there hasn’t been time to digest what the accident means to the future of the series. The Whistler World Series event scheduled for next week will continue said Ball.

Riders will gather at the town base camp of the event at noon Sunday to pay respects and ride in honor of Olson.

Share
Previous FUN IN THE BUTTE
Next Pinnacle Race #5 Results